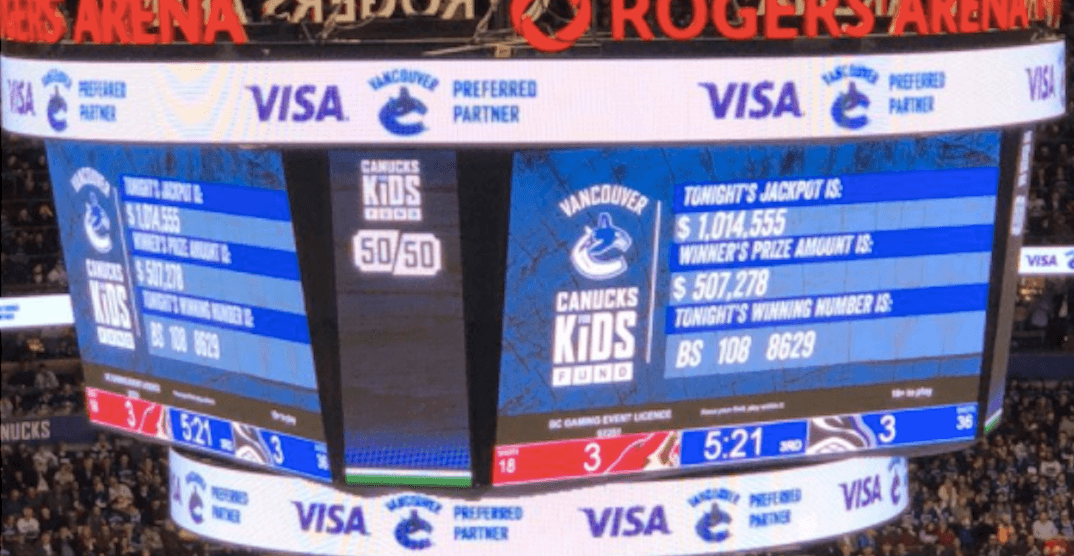 It was a big night on Thursday as Canucks fans said a fond farewell to the Sedins, who played their last game in front of a sold-out crowd on home ice.

And while the win in overtime for the home team (by Daniel on an assist from Henrik no less), was cause for celebration, one particular Vancouverite had an even bigger reason to celebrate.

In what was the biggest 50/50 jackpot in North American history,  the total amount topped the $1 million mark, leaving $507,278 up for grabs.

That’s enough money to buy a new condo in Vancouver (barely) – something the jackpot winner is likely aware of.

That fan has now been identified as Vancouver realtor and Canucks season-ticket holder “since around 2000,” Derek Kai.

Kai said he buys a 50/50 ticket every game, and on Thursday night he was sharing tickets with different groups of family friends and co-workers.

The winning ticket was shared between Kai and two of his long-time friends,  “so we each won around $169,000.”

However, “it took awhile to go through all of the tickets” because Kai’s two friends weren’t able to make it to the game.

Kai said he was “stunned and shaking” when his girlfriend pointed out he had the winning number.

“[I] didn’t know what to do, so we stepped outside to the concourse and staff said they would send me a cheque in a couple of weeks.”

Asked what his plans are for his winnings, Kai said he “can’t speak for the others, but the money is significant to me. I will be sitting down with the two other friends this weekend to discuss more what we are doing.”

For his part, Kai said this includes celebrating with his family and friends and “supporting various causes that we are a part of, including Lions Gate Hospital Foundation.”

He’s also planning to take a vacation with his girlfriend “when I can get some time off work.”

Beyond that, Kai said he will “take some time to make sure I invest the rest wisely.”

Thursday’s pot was boosted by $400,000 of unclaimed winnings being added to the total. A grand total of $3,840,125 was collected by Canucks 50/50 this season, with 50% going to lottery winners and the other half going to the Canucks For Kids Fund charity.