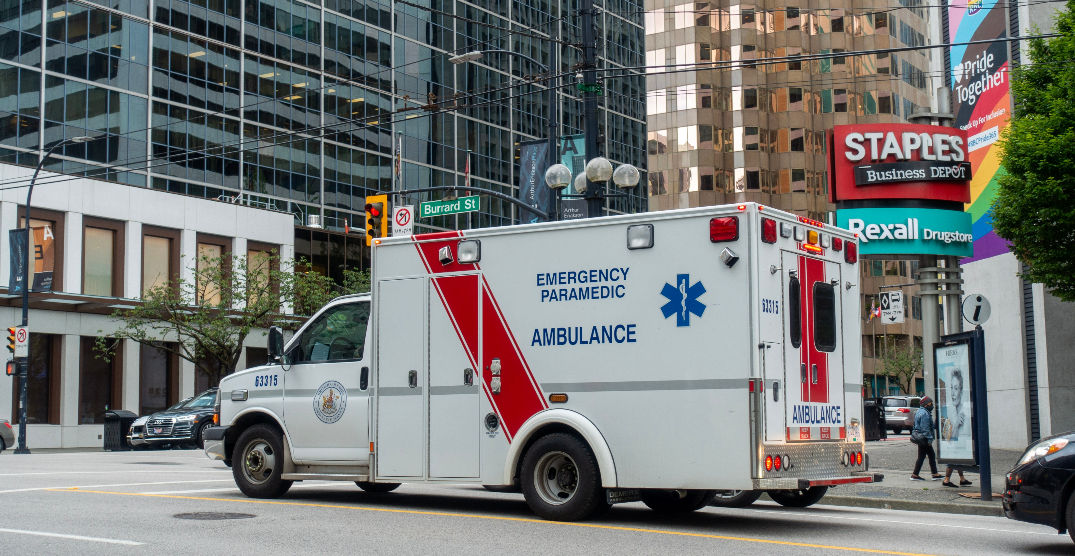 A Vancouver woman is chronicling her troubled experience with 911 emergency response after she took a fall on the street on July 20.

Katherine Dennis emailed Daily Hive Vancouver to describe the response she got after trying to get help by calling 911 after she “took a tumble.” She also emailed Vancouver Mayor Kennedy Stewart and Health Minister Adrian Dix about her experience.

She told Daily Hive that she knew something was broken as soon as she fell and called 911 to get help. She made that call at 1 pm, but things didn’t go very smoothly following that call.

After Dennis made her first call, she waited on the curb in the hot sun for 15 minutes. She called 911 again and asked if help was on the way. The 911 operator told her that no one had been dispatched, and that she should wait and not move if possible.

One hour later, she called back again.

“I explained that I was a 71-year-old woman, sitting on the curb, with no shade and no water and couldn’t move. I asked for an update on the ambulance,” she said.

Unfortunately for Dennis, the dispatcher couldn’t give her an answer on where she was in the queue. They told her that they would try and get Vancouver Fire and Rescue to assess the situation.

Finally, after an hour and 20 minutes fire rescue personnel showed up.

“They were wonderful. They moved me out of the sun and gave me water to sip.”

At 3 pm, two hours after her first call, there was still no word on the ambulance, so a member of the fire crew asked a supervisor for an update.

“At that point there were six code reds ahead of me and I was classed somewhere below Code Red.”

Daily Hive got a statement from BC Emergency Health Services (BCEHS) about the situation, and they confirmed that Dennis was classified as a Code Yellow, which means not life-threatening and not requiring a lights-and-sirens response. BCEHS also said that paramedics arrived at 3:57 pm.

By then it was too late for Dennis, whose daughter had left work to pick up Dennis’ car. Her daughter drove to the scene to eventually transport her to the hospital herself.

Dennis said that sitting in the hospital bed with a fractured pelvis left her a lot of time to think. She wondered if overdose calls were prioritized over her injury. A statement from BCEHS seemed to confirm that this may have likely been the case.

“Over the past few years, BCEHS has been responding to more 911 calls than ever as the result of the pandemic, a growing and aging population, and because of the toxic drug supply crisis,” reads the statement.

An overdose call that involves a life-threatening situation would be a Code Red.

Dennis isn’t asking for a lot, she just feels like her tax dollars should be paying into a system that helps someone like her in the situation she found herself in.

“I’m not special. And I don’t value my life more than others. But I do feel that what happened to me was not right. I’ve worked all my life and still pay taxes into a system that is failing me.”

Daily Hive reached out to the BC Ministry of Health about the situation, but has yet to receive a response.