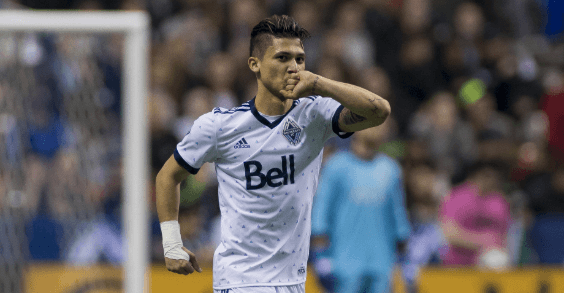 Montero, who has agreed to a two-year contract through 2020, holds a United States Green Card and will not occupy an international roster spot.

“We’re happy to have Fredy back in Vancouver. He’s returning to a city and a club he knows very well, and to a league where he’s had incredible success,” said Whitecaps FC head coach Marc Dos Santos. “He gives us a proven goalscorer and an important presence in our locker room.”

Dos Santos said the question as to whether Fredy will be a Designated Player or “whether we will use Targeted Allocation Money on his contract will be determined prior to the MLS Roster Compliance Date on March 1.”

In the meantime, he said, “we’re looking forward to having him join the group as we start the next phase of our training camp in Los Angeles.”

The 31-year-old is one of only 20 players in MLS history to record at least 60 goals and 40 assists in league play.

“Vancouver is a special place for my family and me,” said Montero. “I’m blessed and excited to be back. The city and fans welcomed us in 2017, and I’m ready to score goals and give my all to the club once again. I just want to say thank you to the coaching staff for giving me this opportunity.”

Whitecaps FC originally acquired Montero via the MLS Allocation Process two years ago to the day, securing the #1 spot in the Allocation Ranking Order from Minnesota United FC in exchange for $100,000 in General Allocation Money, $125,000 in Targeted Allocation Money, and a 2017 international roster spot.

Montero began his MLS career spending four years with Seattle Sounders FC, where he still holds the all-time record with 60 goals, in addition to his 42 assists in 160 matches across all competitions. Along the way, he helped Seattle win three US Open Cup titles, while collecting three MLS All-Star nods and the 2009 MLS Newcomer of the Year award.

Since rejoining Sporting CP in January 2018, Montero started 18 of 37 appearances, helping Leões hoist the 2018 and 2019 Taça da Liga (Portuguese League Cup). Montero scored nine goals across all competitions, including five in the UEFA Europa League. It was his second stint with Sporting, after having also spent 2014-16 with the Portuguese Primeira Liga giants, helping them win the Taça de Portugal and the Supertaça Cândido de Oliveira in 2015.

Besides MLS and Portuguese Primeira Liga, Montero played in the Chinese Super League with Tianjin Teda in 2016. The Barranquilla, Colombia native also played for three clubs in the Colombian Primera A, beginning his professional career with Deportivo Cali from 2005-08, a loan stint to Atlético Huila in 2006, and with Millonarios FC while on loan from the Sounders in 2013.

At the international level, Montero has made four appearances for the Colombian national team.