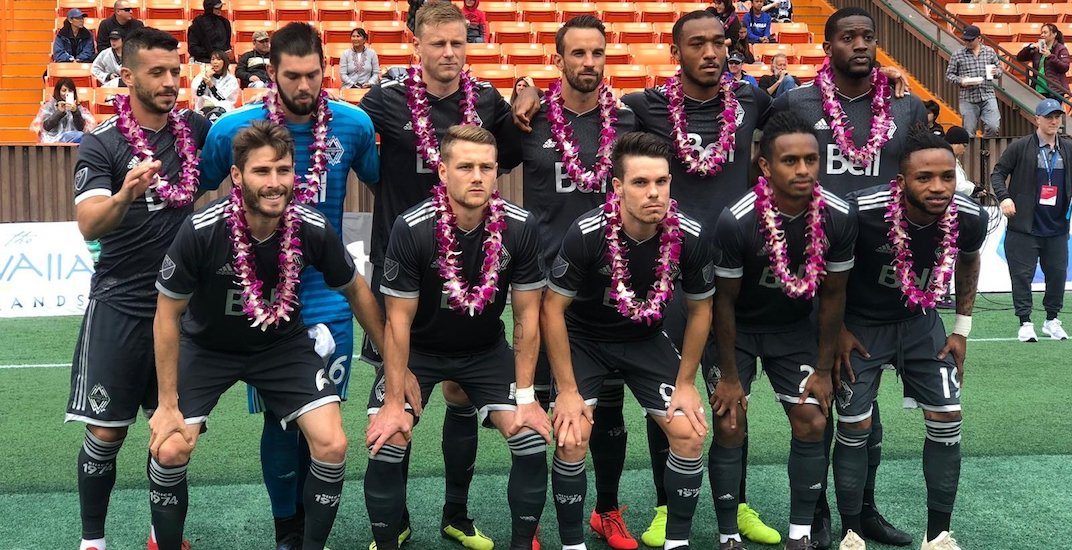 After a 10-day pre-season trip to Hawaii, the Vancouver Whitecaps returned to the National Soccer Development Centre at UBC this week to continue training for the start of the 2019 MLS season. While Vancouver didn’t bring warm temperatures back, the organization has continued to build their roster for the season opener on March 2.

Thirteen new players have been added, including players at key positions.

The rumour mill has continued to be busy, with former Whitecaps striker Fredy Montero the latest player expected to join the team.

“I said it before, I like Fredy,” Dos Santos told reporters this week. “He would fit with what I want to do, but today he belongs to [Portuguese club Sporting CP].”

Montero, 31, spent one season with the Whitecaps in 2017, scoring 13 goals and six assists.

The Whitecaps have also been linked to 33-year-old Costa Rican international Bryan Ruiz, though Dos Santos shot down those rumours rather emphatically.

“Bryan Ruiz, I’ll say this. If he was mentioned, congrats to the agent because he’s trying to  finally to do something with Bryan in MLS, probably,” Dos Santos said when asked by Daily Hive. “I never spoke with the agent, and I never spoke with Bryan, and only if somebody in the club spoke without me knowing, but I don’t think it’s the case. That’s a total lie. It’s not true.”

Here’s a look at the players that will suit up for is essentially a brand new Vancouver Whitecaps team in 2019.

The most significant offseason acquisition by Dos Santos this offseason paying a $1.8 million transfer fee to acquire midfielder Hwang In-beom.

The Young Designated Player had interest throughout Europe, but the Korean international felt Vancouver could help him develop like Alphonso Davies. In-beom has the making to be an electrifying player. He is a star acquisition for Whitecaps FC, and has the potential to put on a show at BC Place.

As an up-and-coming Uruguayan soccer player, Joaquin Ardaiz has been compared to fellow countrymen Edinson Cavani and Luis Suárez in the past.

The 20-year-old Young Designated Player is on a year-long loan, with an option to purchase, from Swiss Super League club FC Chiasso. If he has a breakout MLS first-season, his purchase price could be a great problem to have.

After getting his visa and international transfer certificate sorted this week Erik Godoy will join Whitecaps FC when they travel to Los Angeles for a preseason match on Saturday.

The 25-year-old is on a one-year loan with an option to purchase from Argentina’s Club Atlético Colón. Godoy will provide depth on the back-line as he fights for playing time.

The first Tunisian born player in MLS has the potential to anchor the Whitecaps FC back-line for years to come.

The 6-foot-4 towering Tunisian has a lot of raw talent that could blossom. He could be the next Kendall Waston for Vancouver.

Born in London, Scott Sutter left England at the age of 16 to play football in Switzerland.

The 32-year-old spent 14 seasons playing in the Swiss Super League. He made over 200 league appearances, and played 65 matches in the UEFA Champions League, Europa League, and UEFA Cup competition. In the past two seasons with Orlando City SC, Sutter made 51 appearances.

The 26-year-old has spent the majority of his career in Spain, as well as a loan stint in France’s Ligue 1.

Every top team needs a number six who can play in front of the back-four and link up with the midfield. Jon Erice has that in his locker and will be asked to carry a huge workload in the middle of the pitch.

The 32-year-old has made over 300 appearances in Spanish football, and has also spent time playing in Cyprus and Greece.

A 21-year-old promising Canadian centre-back with two international caps, Derek Cornelius is aggressive and has pace for days. Cornelius and Canadian international Doneil Henry will battle Khmiri and Godoy for playing time.

Born in Australia and raised in England, Andy Rose brings versatility to Vancouver’s midfield. He can play out wide, in the middle, or as a holding defensive midfielder. The 28-year-old brings MLS experience with 82 appearances for Seattle Sounders FC from 2012-2015.

The man known simply as “PC” is one of three Brazilians on the roster this season, along with Felipe and Venuto. The 24-year-old former Orlando City SC product will bring depth on the left-side as he can play on the wing, or at left back.

Zac MacMath is going to compete for the No. 1 spot in net. While he has more MLS experience than Maxime Crépeau does, MacMath only appeared in 11 matches in the last two seasons with the Colorado Rapids.

Crepeau was previously with Marc Dos Santos in Montreal, so he may have an inside track on the starter’s job.