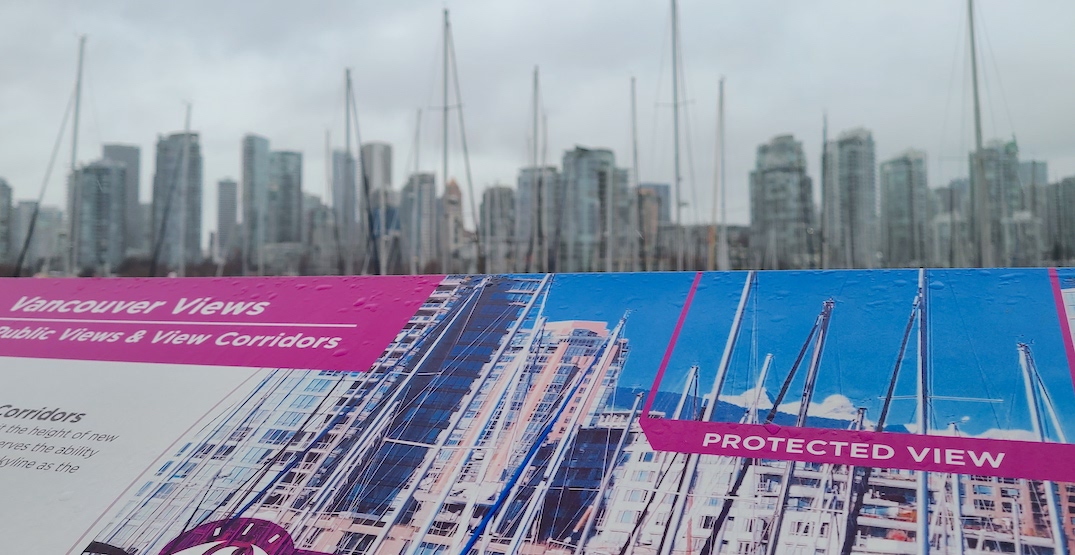 Views of the mountains through this view cone from South False Creek are absent on this rainy day in Vancouver. The City of Vancouver's view cone propaganda signs will soon be removed following Vancouver City Council's decision! (Daily Hive)

For over a century, the City of Vancouver has continued to evolve, growing from a sleepy industrial town into an international cosmopolitan destination.

During this time, the population has relentlessly grown, placing immense pressure on infrastructure and affordability. The last few years have especially witnessed housing prices skyrocket, as Vancouver’s residential stock has surpassed its saturation point under the city’s convoluted and draconian zoning regulations.

Large portions of the general population are now completely priced out of not just owning a home, but even the ability to rent the most basic accommodations.

It goes without saying that this has become a crisis for the Metro Vancouver region’s social well-being and the economy.

That is why today it is with great pleasure to report that the City of Vancouver has officially removed its more limiting development regulations, and not a moment too soon!

This includes, but is not limited to, the removal of all arbitrary height restrictions, such as the mountain view cones, shadowing, and all zoning restricted to low-density housing!

City councillor Terry Reasonable was behind this movement, and Daily Hive Urbanized was lucky enough to have a one-on-one interview with him at Vancouver City Hall. 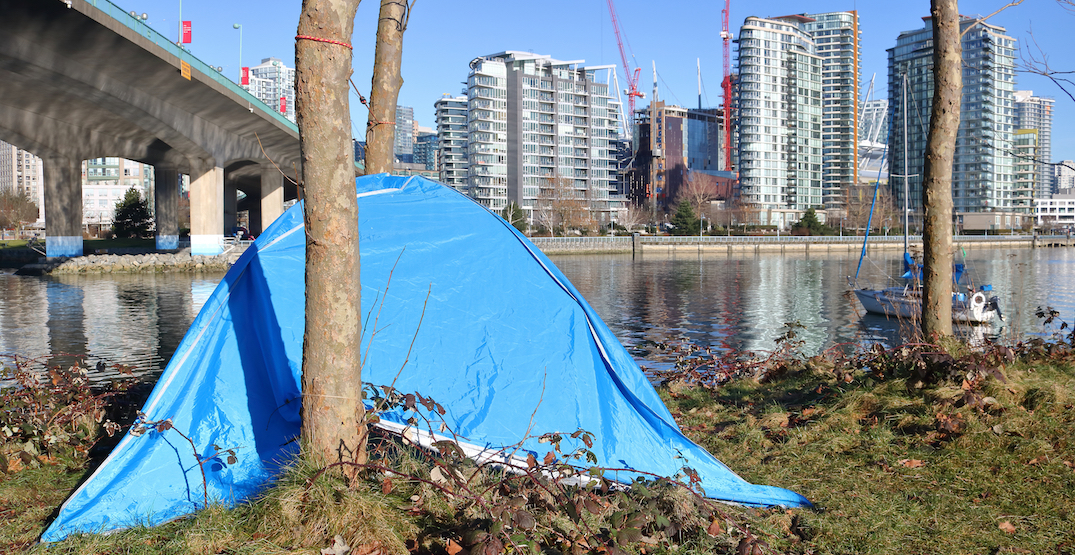 Homeless tent on the False Creek waterfront with the downtown Vancouver skyline in the background. (Shutterstock) 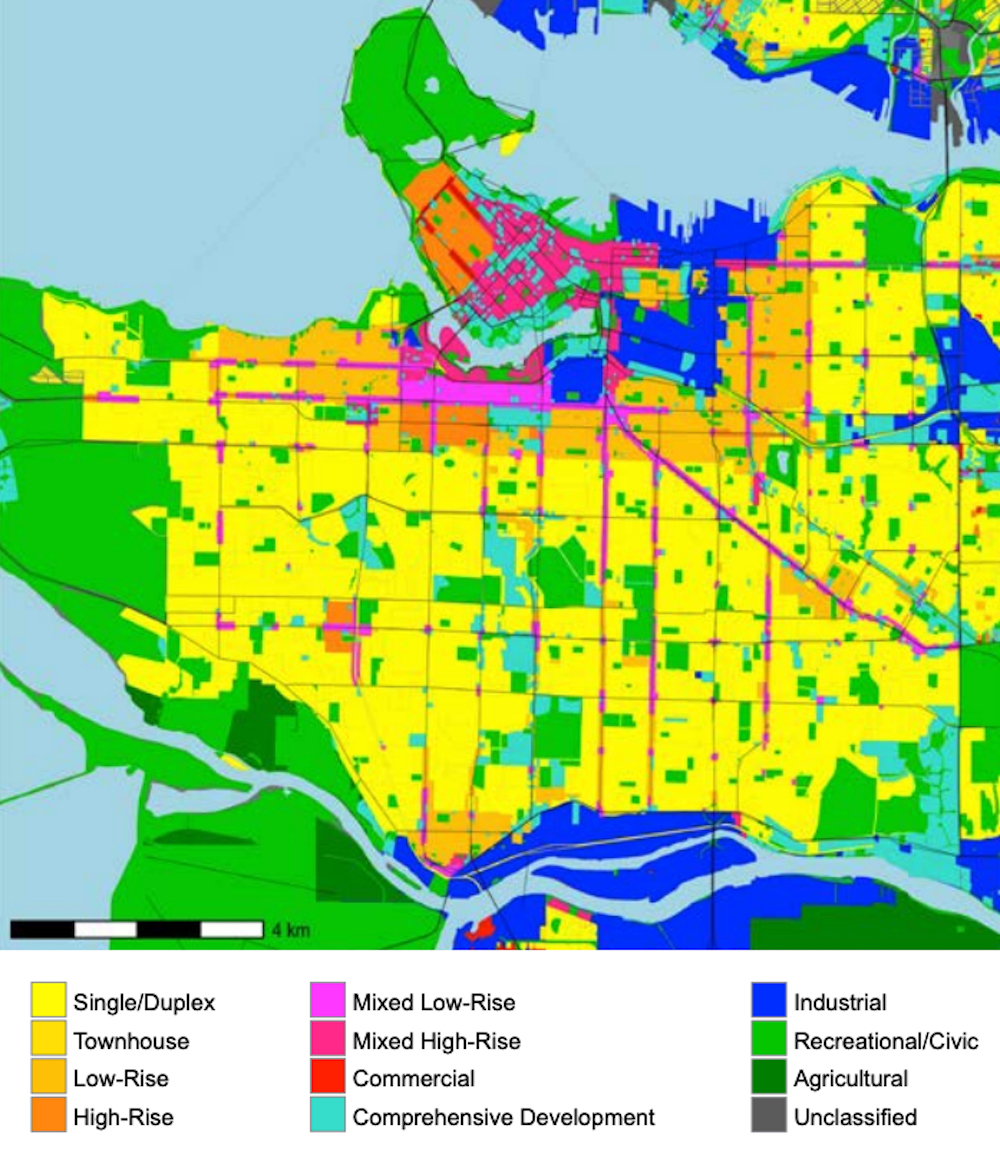 “A new era has dawned on Vancouver!” Terry Reasonable proudly proclaimed, looking out on the skyline from his office.

“City council could no longer allow the farce that the development process had become to continue. For me, the straw that broke the camel’s back was the endless process for moving forward the Broadway Plan.”

“Just think about this,” Terry Reasonable continued, “the Broadway Corridor is Vancouver’s second largest employment centre and has a $2.8 billion subway project underway. Despite this, the relatively modest density increases put forward within that plan were fought against tooth and nail. Even directly on top of the future South Granville Station, a mere 39-storey tower took days of city council’s time to pass.”

“Judging from the NIMBY outcry you would have thought that the Empire State Building had been proposed! The truly sad thing though was that most areas along the Broadway corridor were to be far more limited in height and density than that! Can you believe such hubris?” 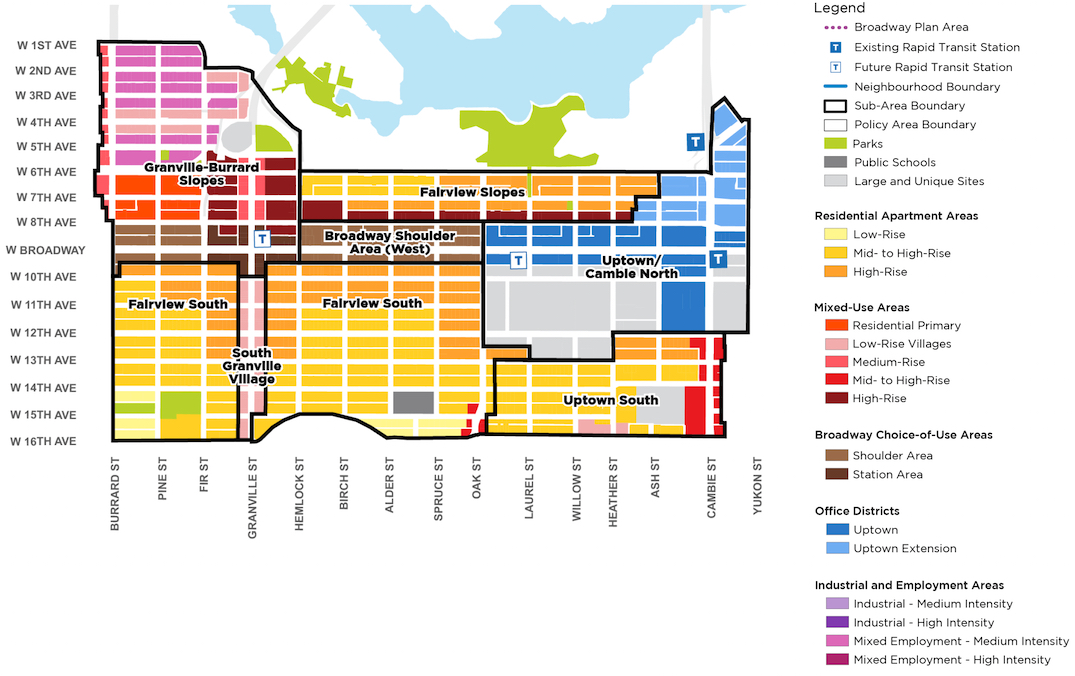 New uses and densities under the Broadway Plan’s core area. (City of Vancouver) 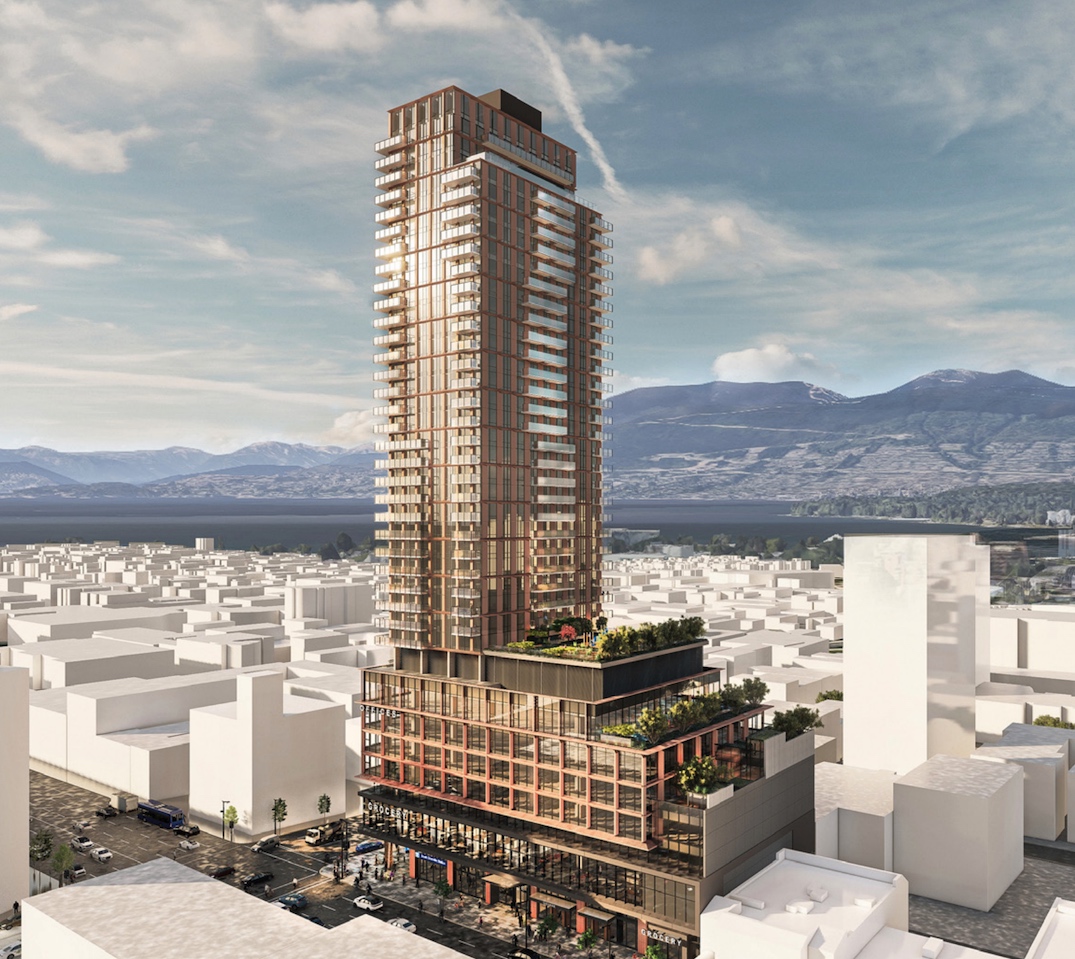 Artistic rendering of the tower concept above the future South Granville Station at 1477 West Broadway, Vancouver. Potentially to be the tallest allowed along Broadway (Musson Cattell Mackey Partnership/PCI Developments)

At this point you could see the frustration building in Terry Reasonable’s eyes!

“It’s head scratching really. Here is a primary urban corridor with a multi-billion dollar transit investment under construction within a city in the midst of a housing affordability crisis,” said Terry Reasonable.

“Yet, we allowed ourselves to waste time slowly shaving off thousands of desperately needed housing units and job space from an already conservative and limited plan. However, in Burnaby, Coquitlam, Surrey, and even New Westminster, towers soaring between 50 to 70 floors are becoming common place near public transit nodes.”

Terry Reasonable continued: “Vancouver talks a big game about being green and sustainable, but then you had the view cones restricting building heights around our region’s busiest transit hubs to low-rise density. Now that’s talking out of both side’s of one’s mouth: Nearly the entire downtown Vancouver peninsula was suffocated with view cones, the most limiting of all blanketing our major transit hubs.” 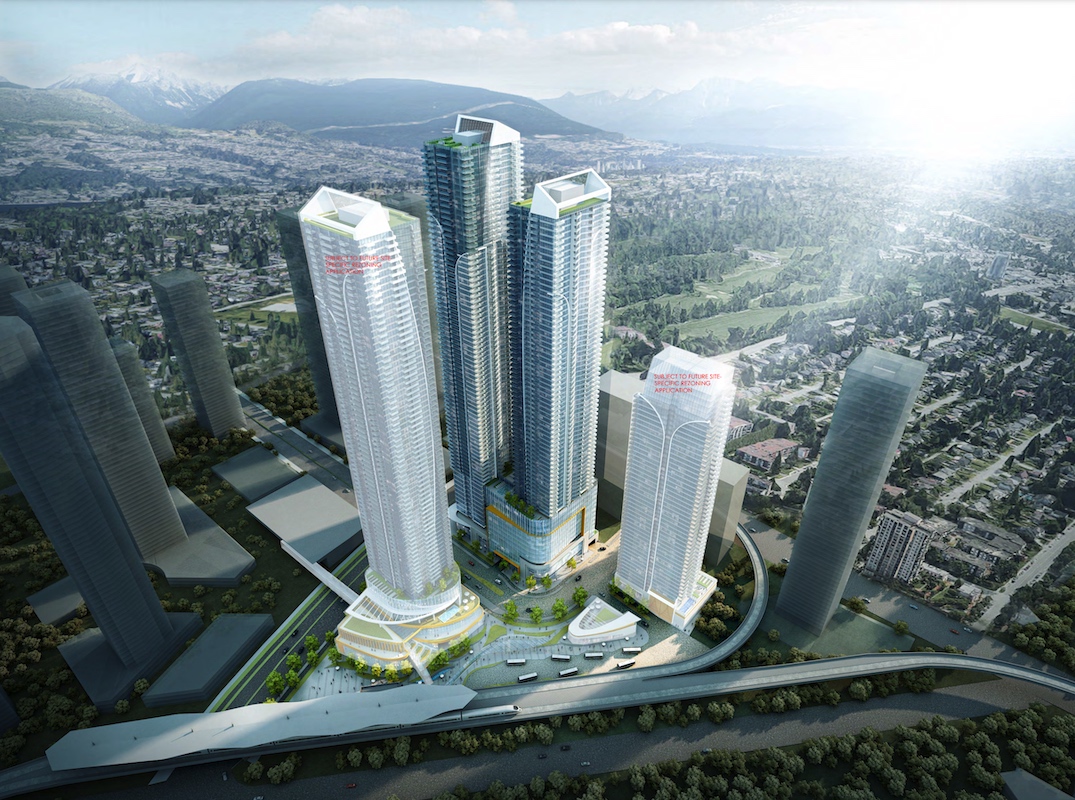 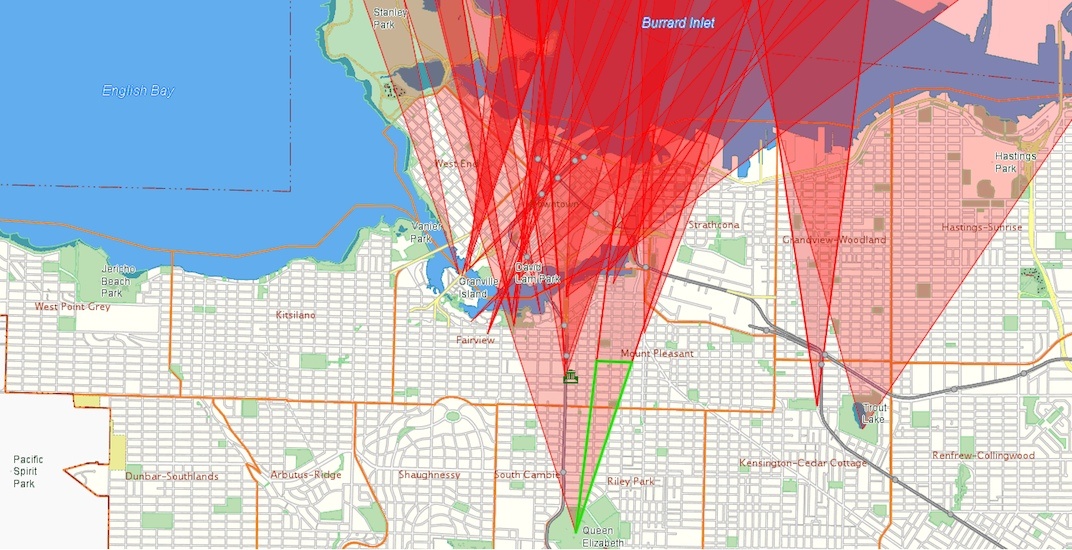 The few areas where relatively taller towers were permitted were chosen simply for the desire to create a “dome-shaped skyline,” and had little to do with transit access.

How bizarre was that?

That’s why it is such a great relief to have the view cones eliminated, finally we can allow the tallest towers in Vancouver to rise directly above and near our busiest transit hubs; Waterfront, Burrard, Granville, Yaletown, Commercial-Broadway, and now the soon to be Broadway-City Hall hub.

The last location Terry Reasonable mentioned surprised me, so I asked him the following: “Terry Reasonable, if tall towers are allowed to soar above the future Broadway-City Hall Station hub just a block away from city hall, won’t you lose the very view of the North Shore mountains you are gazing upon now?”

Terry Reasonable was silent for a moment, before giving a gentle smile!

“I would be much happier to be looking at 70-floor towers with direct SkyTrain access, than the mountains I see now, knowing that this view has come at the expense of thousands of displaced homes,” said Terry Reasonable.

“Fortunately, we are now correcting those misguided actions of the past. We have finally put affordability and transit access before arbitrary aesthetics and the selfish howl of NIMBYs. This simultaneously speeds up the approval process with less bureaucratic red tape in the way for developments, and frees up valuable time for the city to focus on far more serious issues, such as waste management, homelessness and crime.” 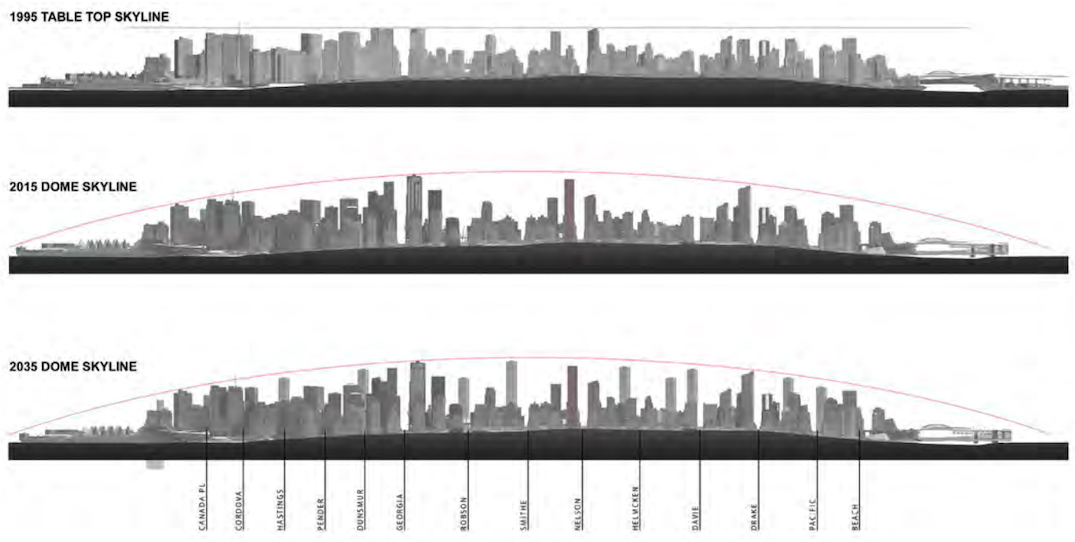 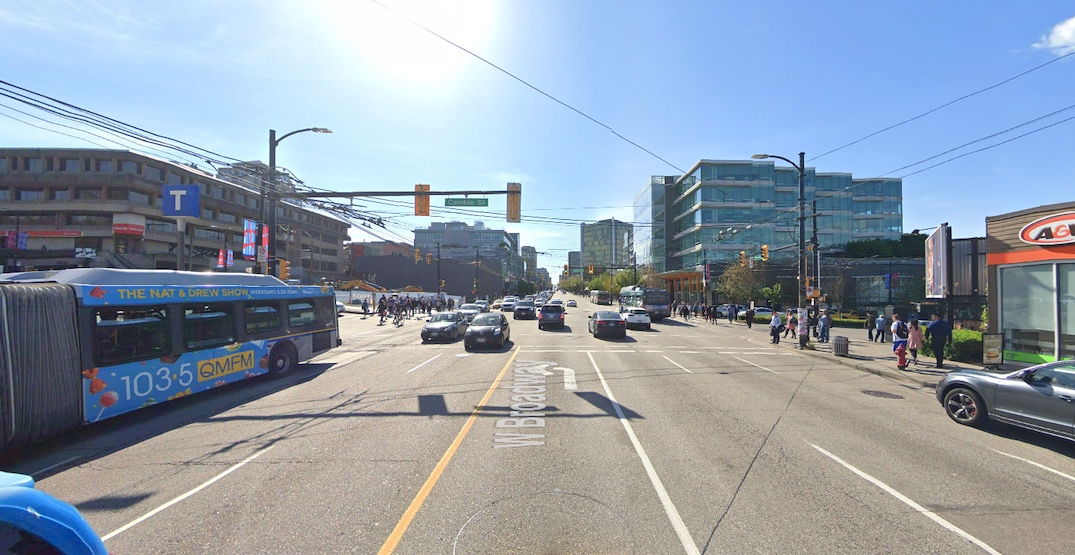 The existing condition of Broadway looking west from the intersection with Cambie Street, outside Broadway-City Hall Station. (Google Maps)

And Terry Reasonable had even more to say!

“View cones don’t matter if the only view you can afford is of the dumpster in your back laneway anyway, as they protect the privilege over the needs of the many. The argument of democratizing access to beauty from those arbitrary legacy locations assumes the city is rooted in a forgone understanding of the city that people go to those areas in their off hours, people can afford to even get there all the time if they even wanted to considering transportation costs are now climbing, and arbitrary beauty overtaking care of all of our citizens is the definition of responsible socioeconomic policy,” said Terry Reasonable.

My interview with Terry Reasonable left me feeling very hopeful for the future of Vancouver, but not everyone is onboard with these changes.

City councillor Karen Grumble had this to say: “Tall buildings scare me. I don’t like change. Why should I expect the neighbourhood that I represent to share any of the burden of a growing region? That’s for everywhere else to handle! We only want the benefits, like a shiny new subway footsteps away from our quiet front lawns!”

Indeed, many residents I interviewed shared Karen Grumble’s opinion. Some of those who are living in detached housing fear the construction of multiplexes.

For those living in multiplexes, the fear is of towers.

For those in towers, it is skyscrapers.

The pattern was hard to ignore — all these residents seem to be against anything larger than what they currently own.

I started to wonder if these residents believed that their neighbourhoods have existed in their current state since the dawn of time.

After a little more research, I discovered that is indeed not the case, but instead is nothing more than a classic case of, “I was here first, and I’m closing the door behind me.” 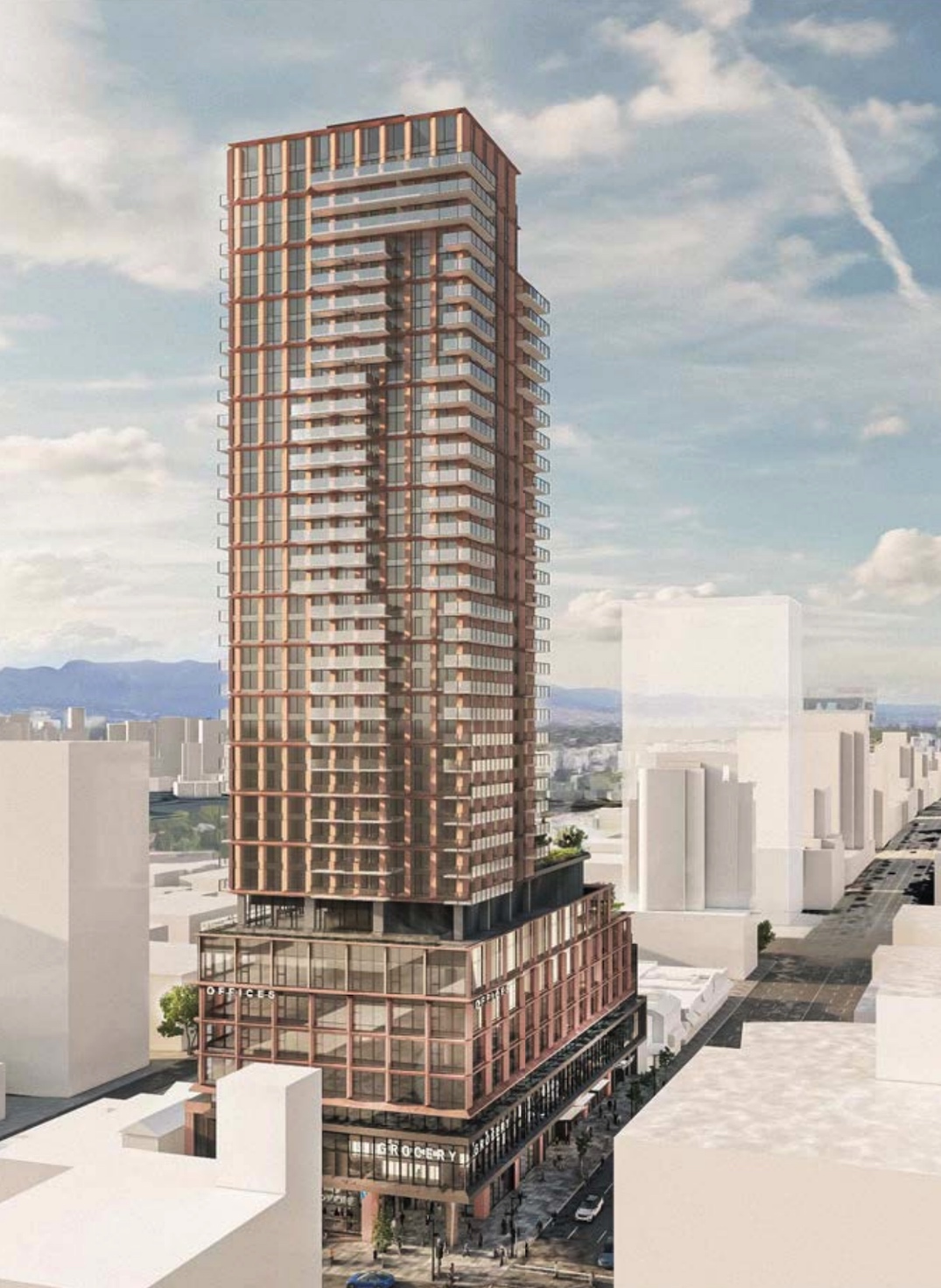 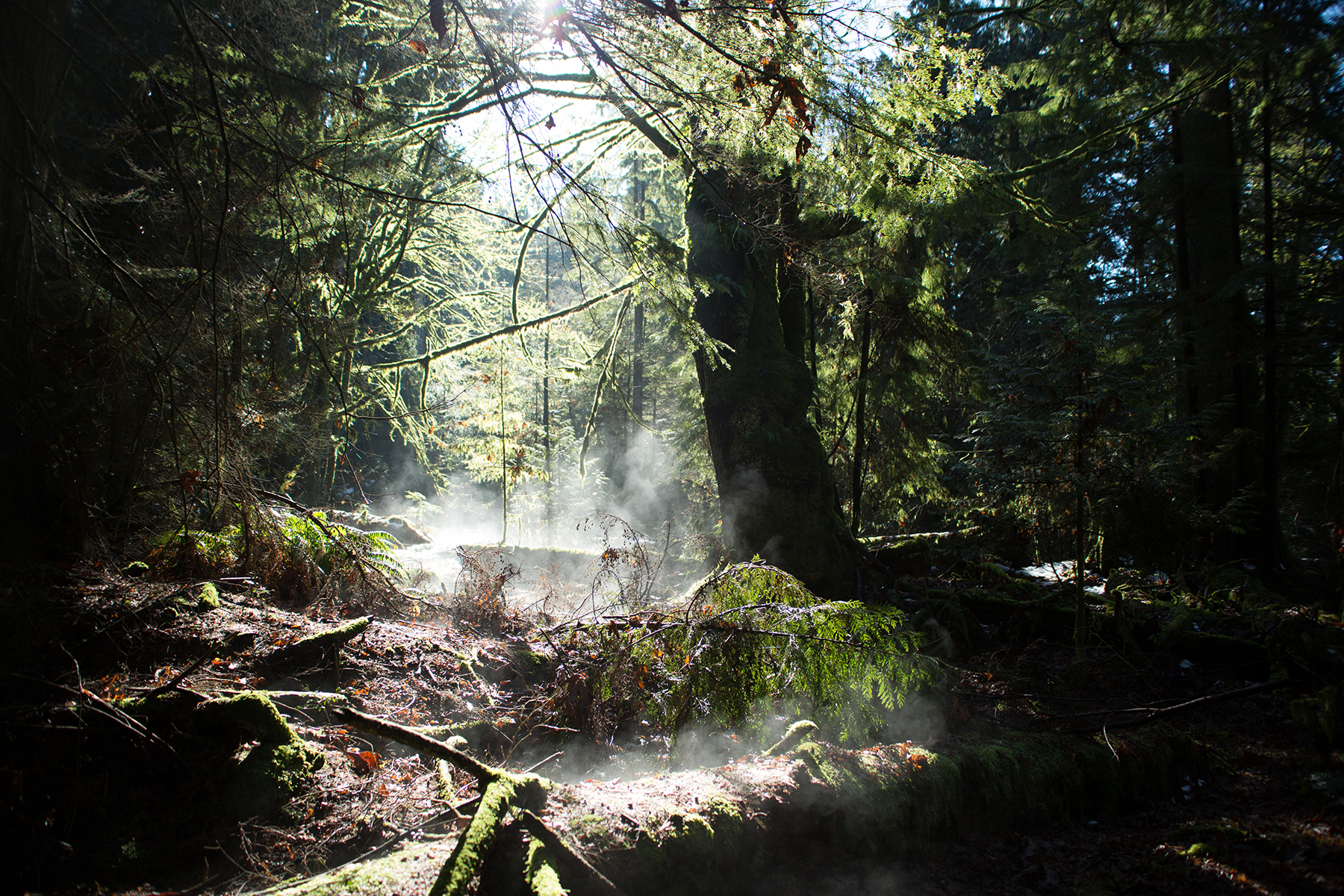 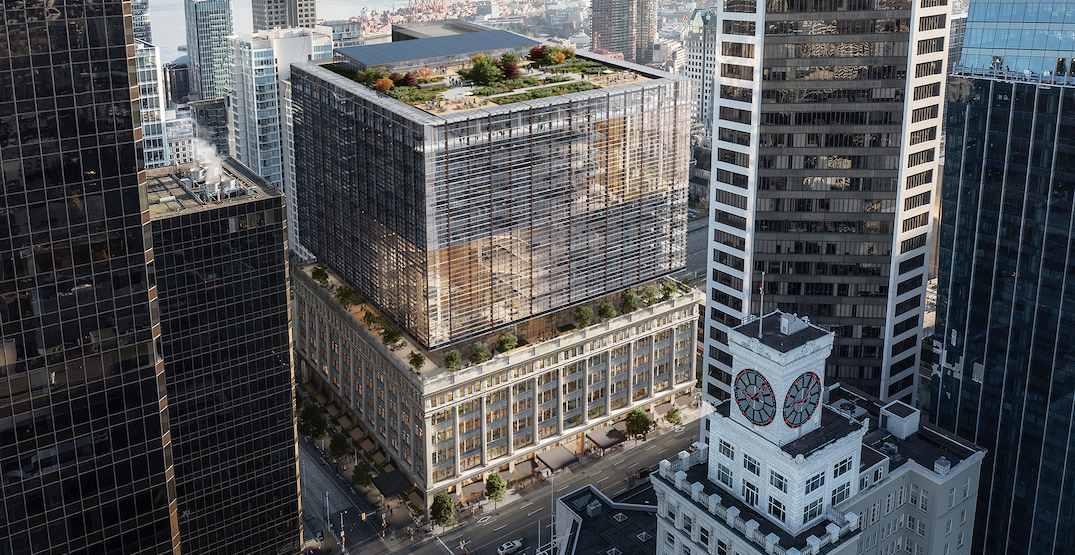 Despite this opposition, city councillor Terry Reasonable and many others like him finally took the bold step that Vancouver has needed for years, and the city will be far better off for it.

Proposals are already flooding in, now that the city’s transit hubs — investments of billions of dollars — can be properly exploited to their full potential!

The design of a 12-floor addition to downtown Vancouver’s Hudson’s Bay flagship store building has been revamped to an appropriate tower height of 55 floors, taking full advantage of its location directly above Granville Station and adjacent to Vancouver City Centre Station.

Perhaps even more encouraging is the complete redesign of the three towers replacing the Safeway grocery store and parking lot right next to Commercial-Broadway Station — arguably the geographical heart of the SkyTrain system.

Originally stuck in development purgatory with notably low floor counts, the Safeway redevelopment at Commercial-Broadway Station has now been revamped to more appropriate tower heights of 65, 55 and 45 floors.

Finally, Vancouver is accepting the important role it must play in our region’s future! 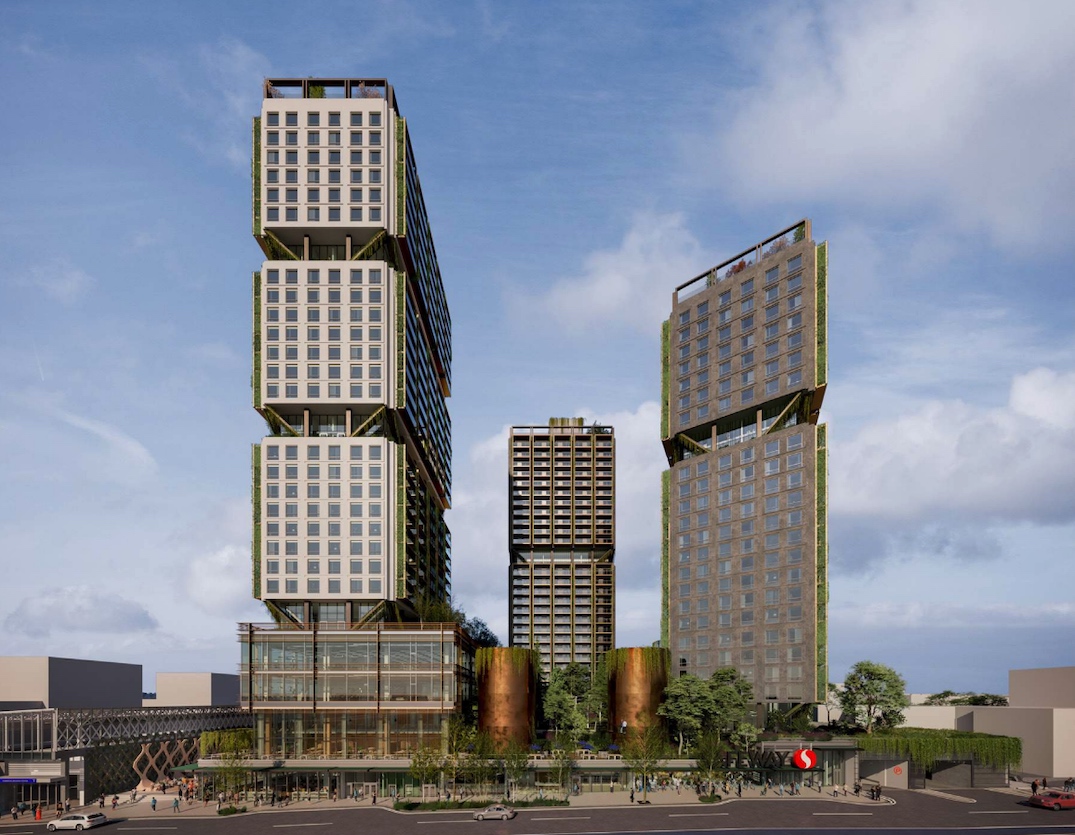 Disclaimer: This is a satirical opinion piece written to highlight some of the self-inflicted housing affordability and supply challenges that are the direct result of the City of Vancouver’s unrelenting arbitrary policies that limit building heights through mountain view cones, restrictive zoning and community plans, and increasingly shadowing considerations. In the process, Vancouver is also redirecting economic growth and tax dollars into the suburban municipalities.