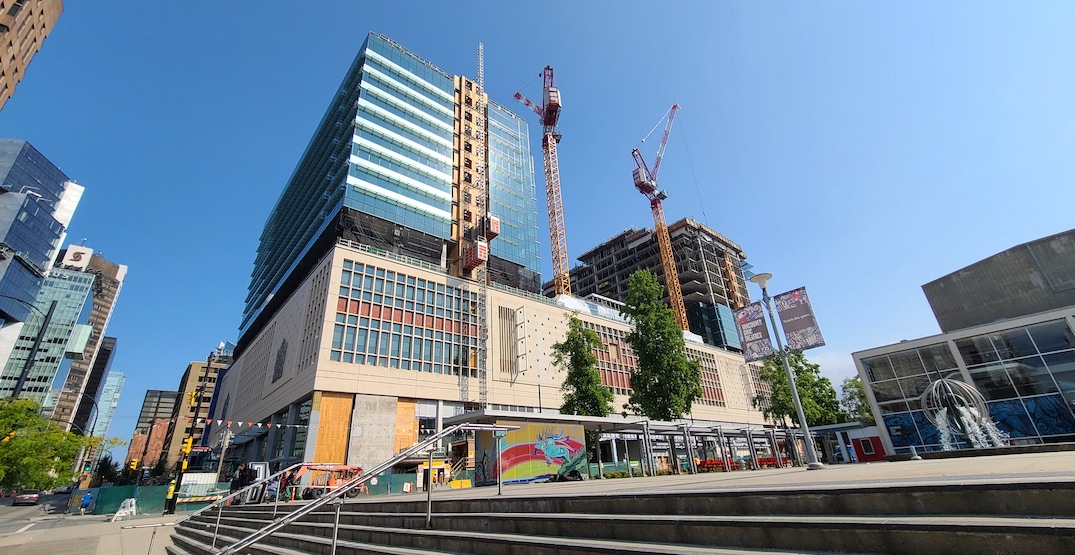 Construction progress of The Post redevelopment in downtown Vancouver, as of June 29, 2021. Upon completion in 2023, it will be home to over 6,000 Amazon office workers. (Kenneth Chan/Daily Hive)

Vancouver’s tech ecosystem continues to make inroads in growing its presence, as its tech talent is now ranked 11th in North America, based on the latest tech talent report by CBRE. This moves the city up by one spot compared to the commercial real estate firm’s previous annual ranking.

Within Canada, Vancouver is only outranked by Toronto (4th) and Ottawa (10th), which is seeing its tech sector being propelled by Shopify’s headquarters. The ranking of 50 top tech cities in North America is topped by the San Francisco Bay Area, followed by Seattle and Washington, DC.

CBRE’s ranking is based on 13 measures on the ability of a city to attract and develop tech talent, including tech graduation rates, tech-job concentration, tech labour pool size, and labour and real estate costs.

There are now 91,200 tech employees in Vancouver, representing a 36% increase over the past five years, and growing to a share of 8% of all jobs in the city.

Post-secondary institutions in Vancouver issued 12,944 tech degrees between 2015 and 2019, and 24,200 tech jobs were added in the city from 2016 to 2020, which represents a net “brain gain” of 11,256 tech workers — from both homegrown and locally educated talent, and those who moved to the city in search of opportunities. Much of the city’s current momentum is driven by Amazon’s big expansion in downtown Vancouver.

Toronto was an outlier amongst all cities evaluated, with a net gain of 54,862 tech workers — about 10 times more than the San Francisco Bay Area — from issuing 26,338 tech degrees and seeing 81,200 tech jobs added.

“Many factors already are in place to fuel strong tech-talent job growth this year and beyond, including demand for tech to facilitate continued remote work, robust e-commerce growth and streaming services,” said Todd Husak, managing director of CBRE’s tech and media practice group.

“Big tech markets will gain from their established pipelines of tech graduates and many workers’ return to city centres. Smaller markets will reap benefits from their cost advantages in labor and real estate as well as the tech industry’s embrace of remote work for certain employees.”

Vancouver’s average tech wage is 65% of the average in US cities, but its five-year average salary growth of 18% over a five-year period was amongst the highest of all cities — partially due to increased competition for top local tech talent by big players such as Amazon.

The strength of Vancouver’s tech industry is also reflected by the city having the lowest office vacancy rate in North America, now hovering at 6.6% as of June 2021.

Unlike other professions, the tech industry in North America has been relatively unscathed by the economic impacts of the pandemic. Nearly five million sq ft of office space is currently under construction in downtown Vancouver, and more space was proposed or approved over the past year during the pandemic, a strong sign of long-term investor confidence in the city’s office market. 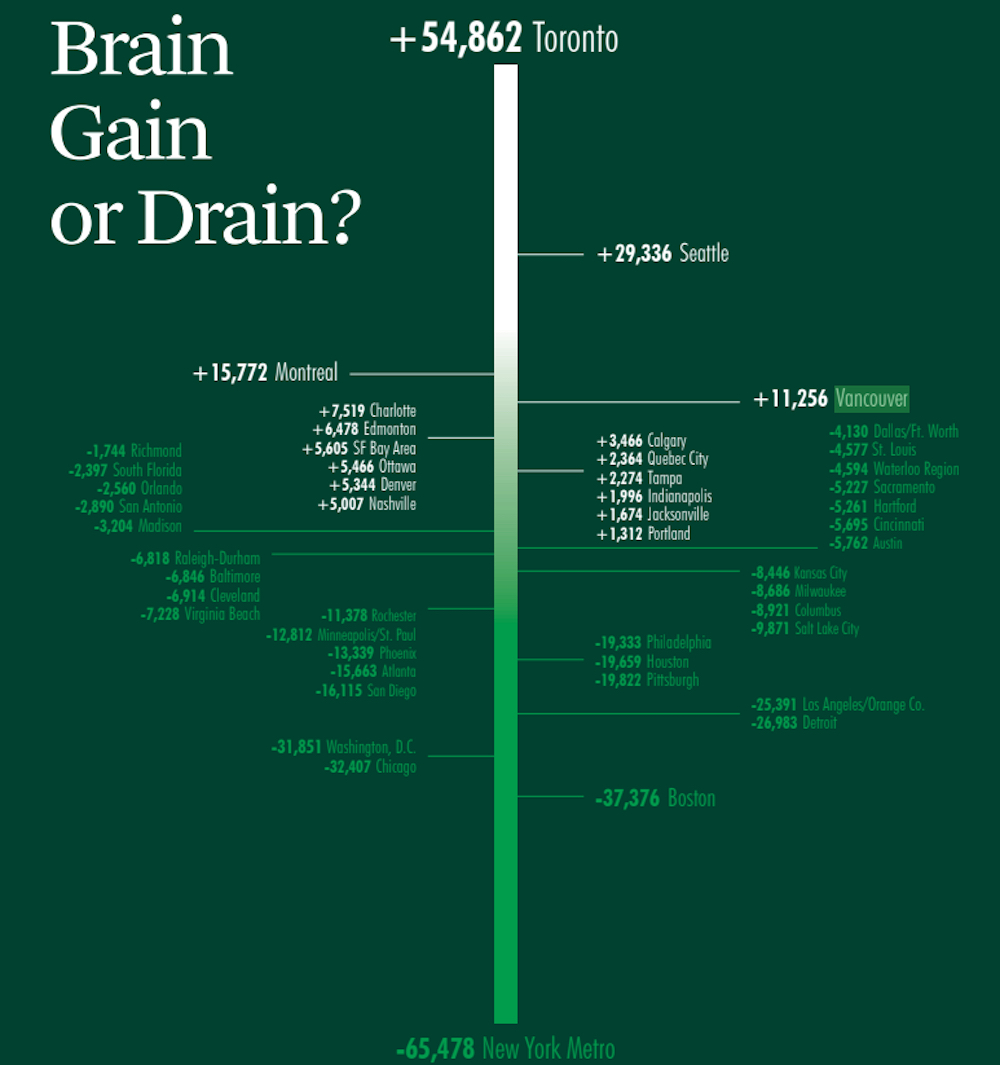 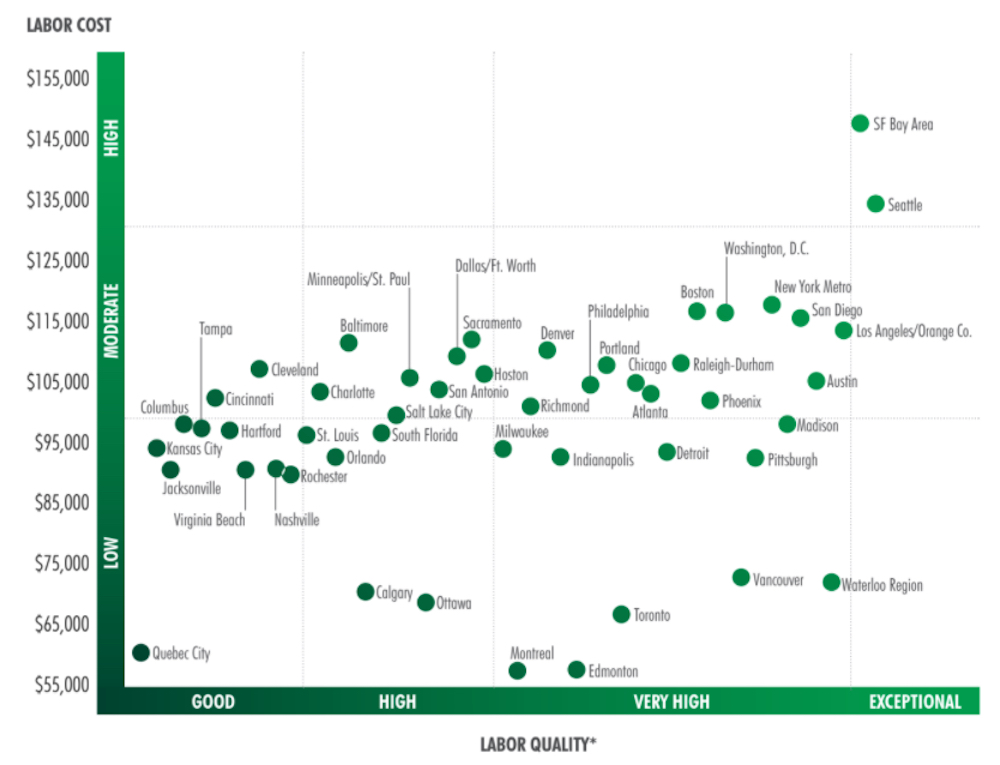