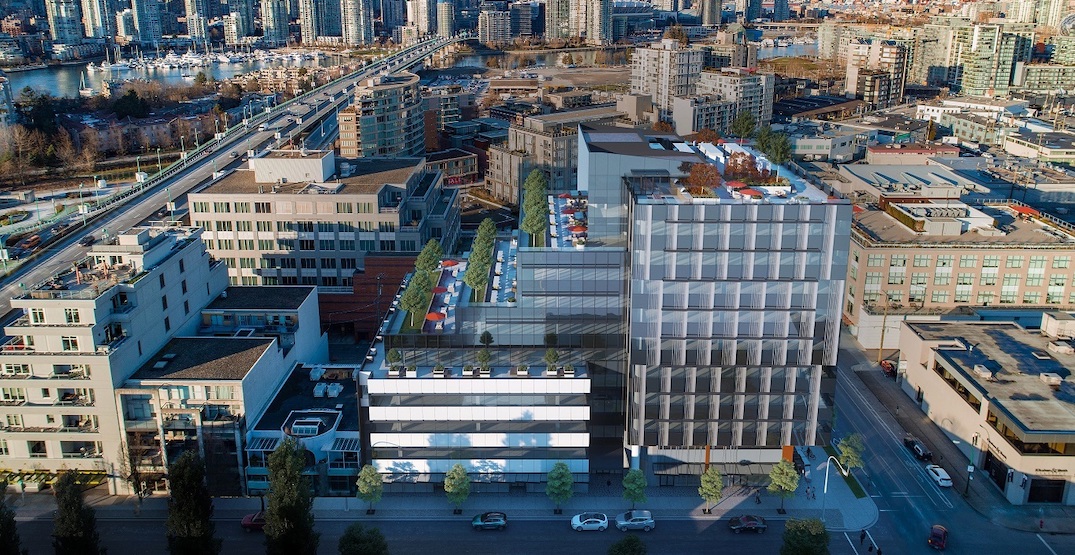 A major corporate office employer in Metro Vancouver is making a big shift in its workplace format, and in the process, it will be moving its headquarters to Vancouver.

In early 2022, Best Buy will open a new Canadian headquarters office at 425 West 6th Avenue on the westernmost edge of Mount Pleasant. It is a new 10-storey office building currently under construction at the northwest corner of the intersection of Yukon Street and East 6th Avenue.

Best Buy will occupy the top five floors — about 77,500 sq ft of the 177,500-sq-ft office space being built. This completely replaces the company’s sprawling business park office campus at 8800 Glenlyon Parkway in the Big Bend industrial area of South Burnaby, where the company has occupied about 140,000 sq ft of space for the past 25 years. 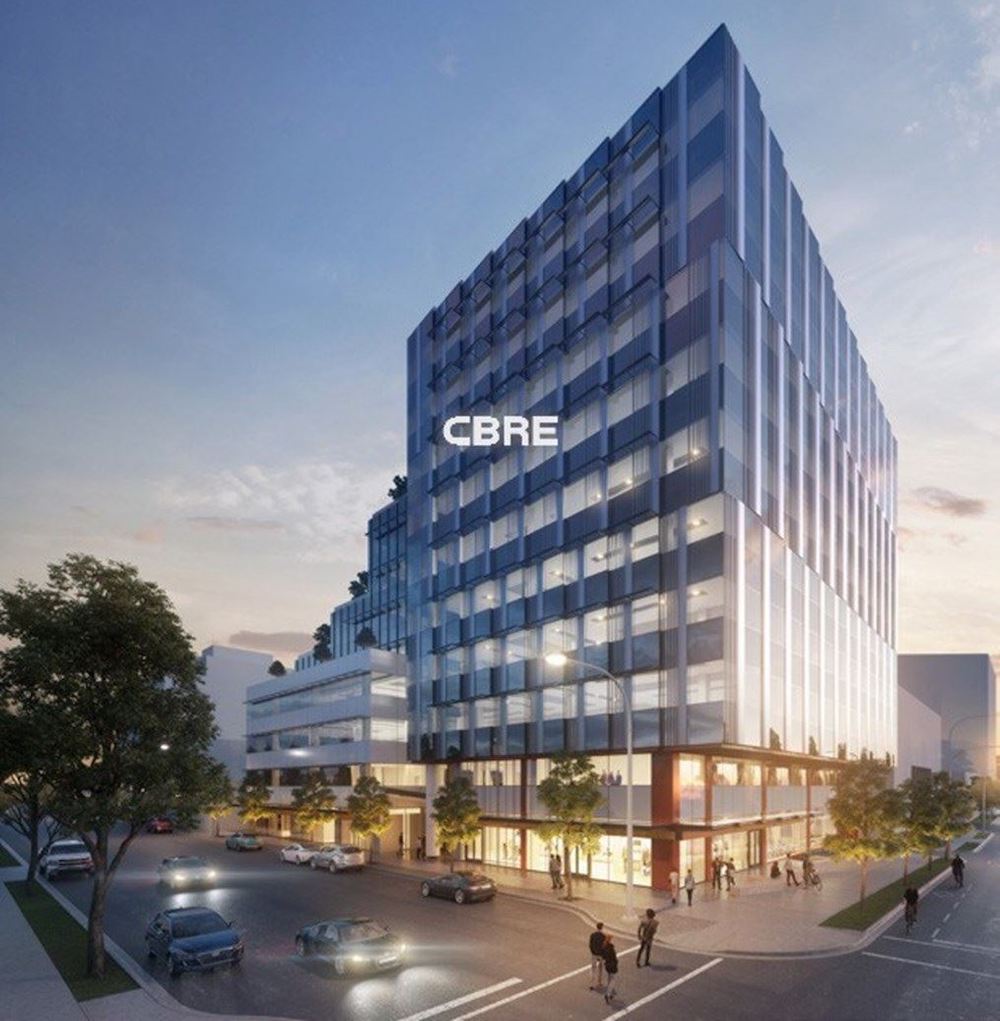 The current Burnaby office has a capacity to accommodate all 1,200 workers with the company, but the new Vancouver office, at only half the size, has the capacity for just half at 600.

In an interview with Daily Hive Urbanized, Chris Taylor, the CHRO for Best Buy Canada, explained that the new office would revolve around a hot-desking format where staff book desks, rooms, and parking spaces to use, as opposed to the current configuration of providing everyone with a desk.

As only 300 desks will be outfitted into the new space, the future of the Best Buy headquarters will depend on the continuation of flexible, semi-remote work as a permanent change installed by the pandemic.

“We are designing a space that can adapt to the needs of both groups and individuals when they visit. The environment will be built for working groups, and when we ask people to come in, it’ll be in a team setting. It won’t be just to come in and sit in a cubicle,” said Taylor.

“We’ve become so productive at remote work that we want to make sure the invitation and reasons for being at the office are very purposeful because we’re only going to have about half the space.”

On-site work will be an option when needed and available for those who prefer or need an office to work from, but on an intermittent basis. Based on job function and technology, the teams required to be on-site, full time include information technology, customer experience, loss prevention, building services, and receiving and shipping. 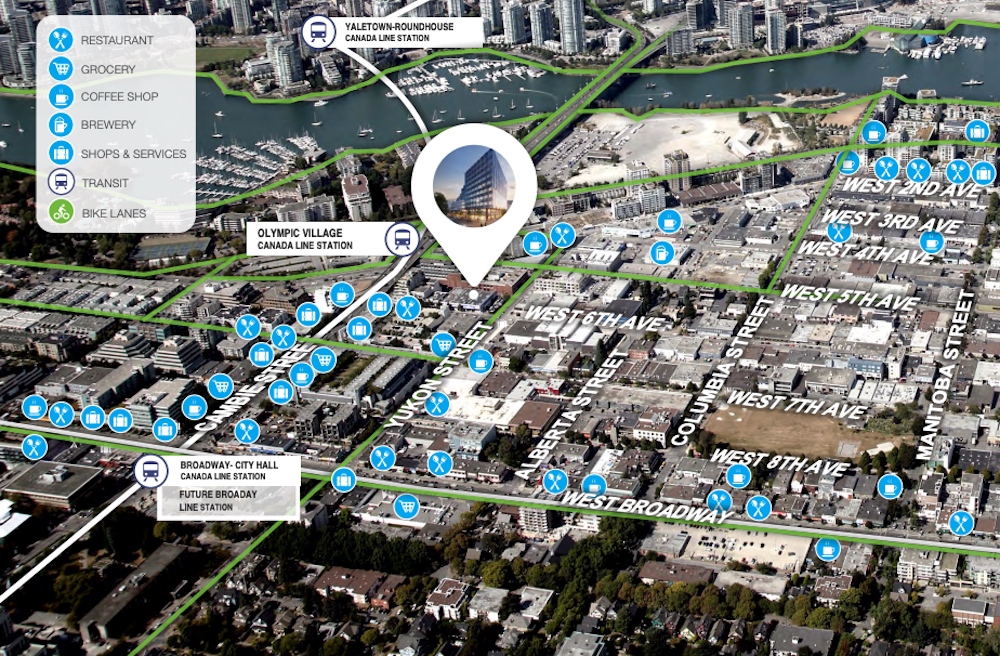 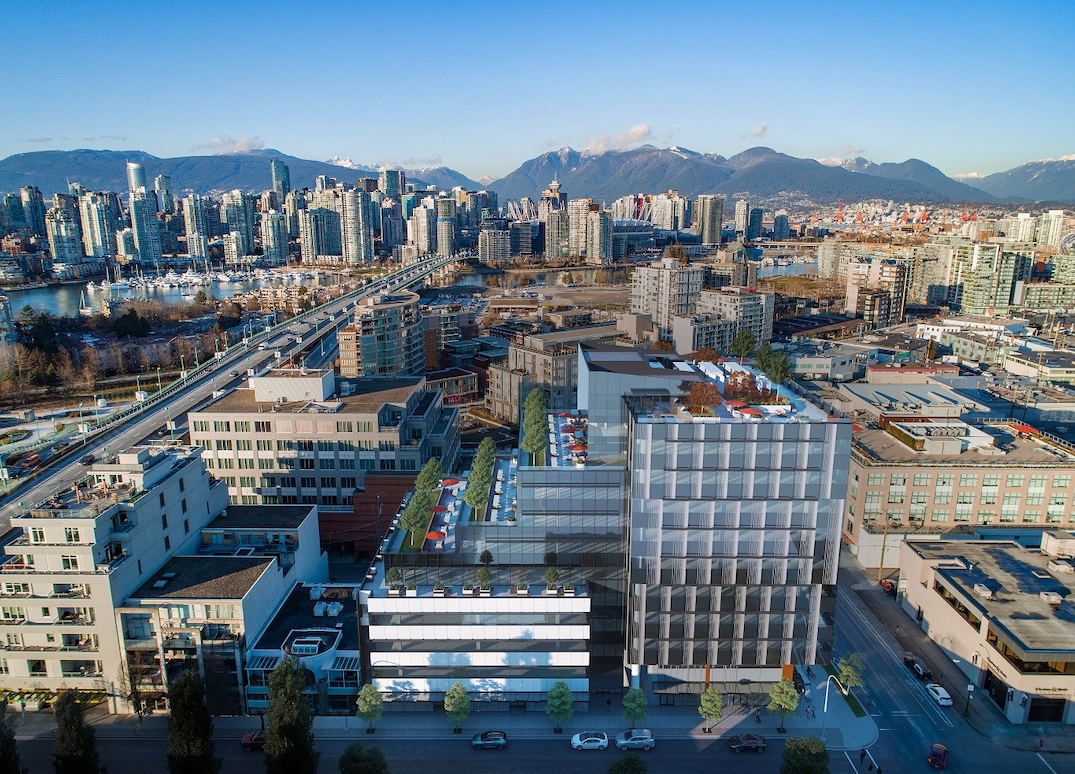 The highly central location of the new office, coupled with the downscaled on-site worker presence, also allows Best Buy to adjust the amenities it provides to its workers.

As the Burnaby office is in an isolated industrial location that is a considerable distance away from restaurants and amenities, Best Buy has been operating a large cafeteria and fitness gym.

This will not be a necessity for the new location with the ample dining options that are available in the area. Instead of replicating full food service, there will be a dynamic meeting, and social space with a “really cool coffee shop feel” where people can congregate and collaborate. A partnership will be established with the private fitness gym planned for the ground floor of the building.

Best Buy staff also have access to several large private patio areas on the west side of the terraced upper floors of the building. As well, all building tenants will share a common indoor and amenity space on the rooftop.

“It’s a very different way of working, but we think it’s going to be really fun and collaborative, so that’s the way we’re doing the design work. The individual work is not the primary starting point, but we’ll have options for people who need to get out of their small condo, want to get away and get some quiet time in an office setting, then we’ll have that as an option as well,” he said.

“So we feel like we have people’s needs where it’s most needed, and I think it’s going to take some time once we’re up and running in there to see if we hit the configuration beautifully on target or if we need to make some modifications. We’ll make sure we’re flexible that way.”

This new location is also within very close walking distance to both SkyTrain’s Olympic Village Station to the north and Broadway-City Hall Station to the south, which will become a major regional interchange hub when the Millennium Line Broadway Extension opens in 2025.

As the current office in the industrial area lacks optimal public transit connectivity, Best Buy has been operating a frequent free shuttle service from Metrotown Station that runs every 15 minutes over six hours at the start and end of the workdays. This costly expense will, of course, be discontinued upon the relaunch of the Canadian headquarters.

Taylor adds that the idea to move the office began before the pandemic for the desire to be in a more urban area that allows Best Buy to attract top tech talent.

Mount Pleasant is not only a regional cluster for tech and creative industry businesses, but this particular site is also immediately adjacent to the Best Buy store at 2220 Cambie Street.

“We wanted to make sure being suburban was not blocking any talent or putting up any kind of barriers for talent that might join us due to location, so we had started to look at a number of locations prior to COVID-19. Certainly, the size of the location and the style changed somewhat dramatically as we went into COVID-19 and work styles changed,” he said.

“When this site came up and the fact that it was directly beside the Cambie Store, it absolutely became one of the major attraction points for us, along with the location in general. It’s just fantastic for our merchants and anybody in the office who can just walk over and go look at the store to see what’s going on.”

The new building at 425 West 6th Avenue is developed by Cressey Development Group and designed by IBI Group. 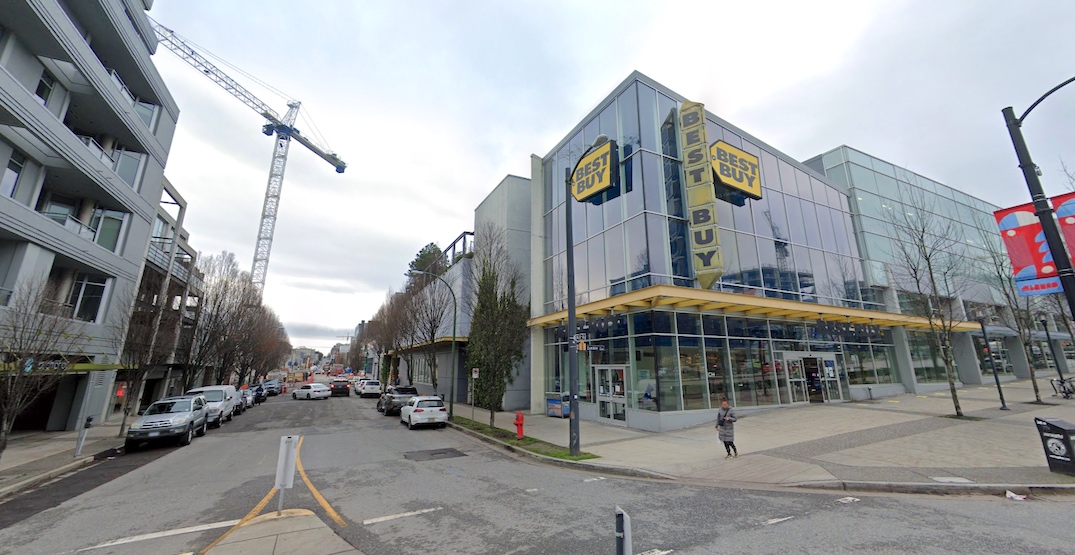 Construction site of the 425 West 6th Avenue office building that will be the future Best Buy Canada headquarters office (left), and the exterior of the Best Buy store at 2220 Cambie Street (right) in Vancouver. (Google Maps) 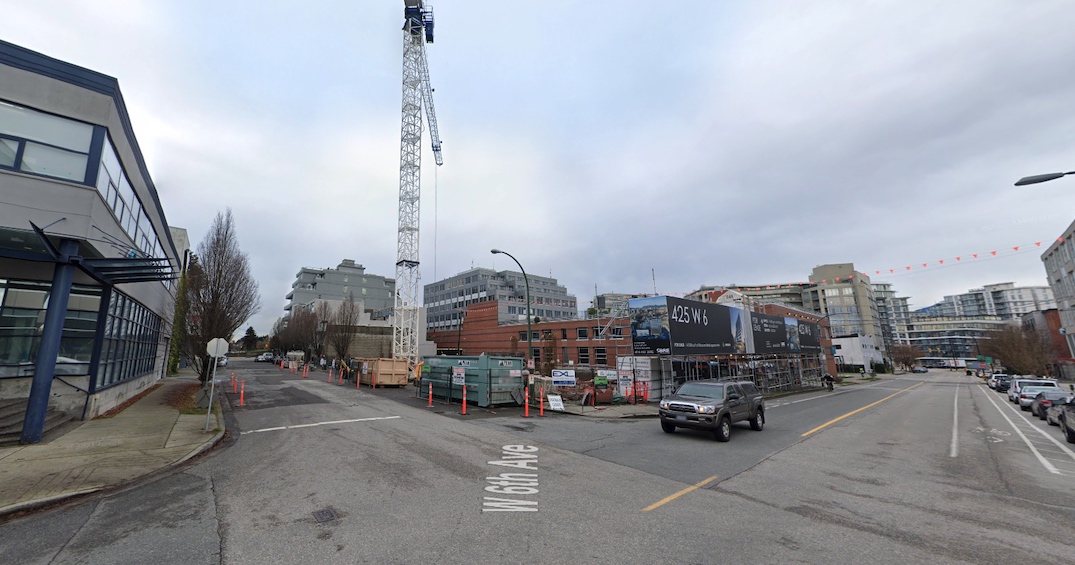