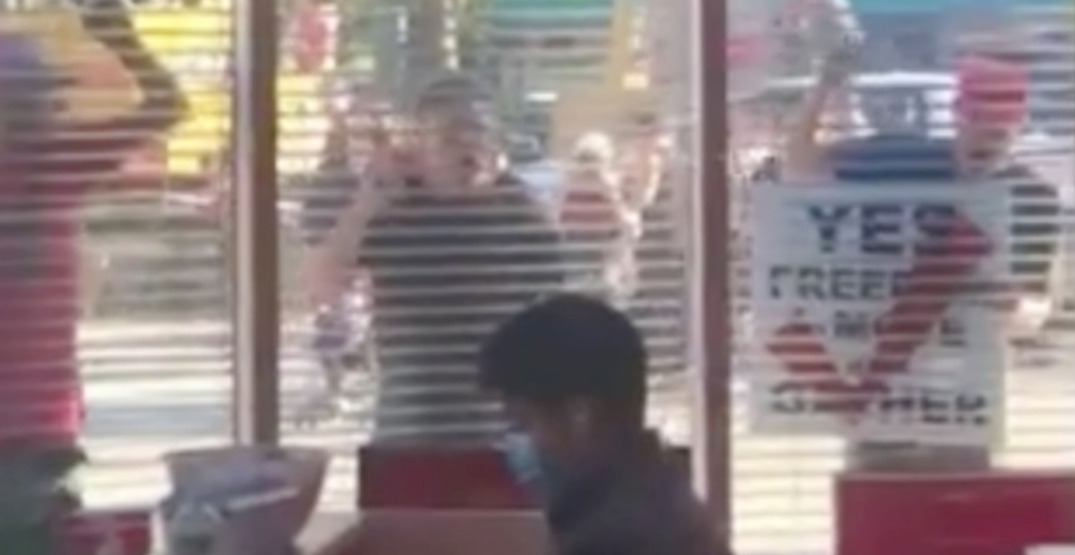 Vancouver federal Liberal candidate Taleeb Noormohamed has been mired in controversy recently regarding alleged house flipping, and on Wednesday, his Vancouver office was stormed by angry citizens.

Running in the Vancouver Granville riding, Noormohamed posted a video on Twitter showing a group of angry people banging on the glass doors of his political office, located at 1401 West Broadway, near Granville Street, where volunteers calmly sat at their desks, trying to continue their work.

He called the behaviour unacceptable.

In Canada, we solve our issues through dialogue, not threats and intimidation.

Banging on our office windows, spewing hate, and intimidating our team, including young volunteers, is unacceptable. #Vancouver #VanGran pic.twitter.com/29CGKuyiUg

In the video, five or six people can be seen loudly knocking and banging on his office windows and door, with one person standing behind a megaphone.

Very upsetting to have to ask a 13-year-old girl – for the second time this campaign – if she is ok after facing abuse from angry adults. No one on a political campaign, especially volunteers, should be threatened simply for participating in their democracy. #Elxn44 https://t.co/z2zmravICP

It is not known if the demonstration had any connection to the large-scale protest that occurred near Vancouver City Hall and Vancouver General Hospital, but his video was posted around the same time.

Noormohamed says his team was “intimidated” by the unprovoked onslaught.

The federal NDP party alleges that Noormohamed has made nearly $5 million since 2005 from flipping homes.

The riding of Vancouver Granville is a target for the Liberals in the upcoming election.

Daily Hive has reached out to Noormohamed for additional comment.