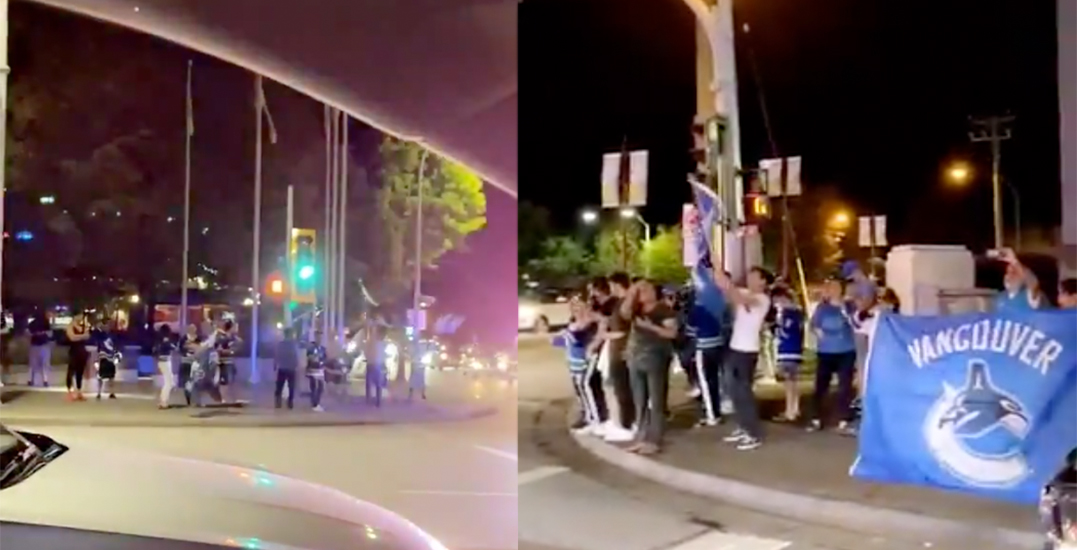 The Vancouver Canucks have a shot at clinching the series against the St. Louis Blues tonight, and police say they’ll be monitoring Scott Road in case they do.

The corner of Scott Road and 72 Avenue has long been a tradition for Canucks fans. After a playoff win earlier this week, large crowds were seen cheering, waving flags, and playing musical instruments while Canucks fans driving by honked in support.

In the event of a win, Friday night will be no different. In fact, clinching the series means the Canucks will advance to the second round of the Stanley Cup playoffs for the first time since 2011 — which is even more cause for celebration.

The Surrey RCMP and Delta Police Department, however, are reminding fans to “celebrate safely” and to “stay out of the COVID-19 penalty box.”

In an effort of “ensuring the celebrations remain safe,” police say that they’ll be in attendance of any future celebrations to ensure public safety and manage traffic. Specifically, they’ll be enforcing the liquor act and current COVID-19 health orders.

And although crowds “have not caused significant issues” so far, Surrey RCMP Staff Sergeant Winston Shorey says that they’re “concerned” about the potential transmission of coronavirus.

“Celebrations during previous play-off runs have been peaceful and, apart from traffic concerns, crowds have not caused significant issues,” he said in a statement.

“This year, however, we are concerned about the risk of COVID-19 transmission among those who attend the gathering. We are asking everyone to ensure that they are complying with COVID-19 public health orders while celebrating.”

Fans should, of course, make sure they’re remaining physically distant from others, even when outside, and Surrey RCMP recommends that everyone attending considers wearing a mask, especially when physical distancing isn’t possible.