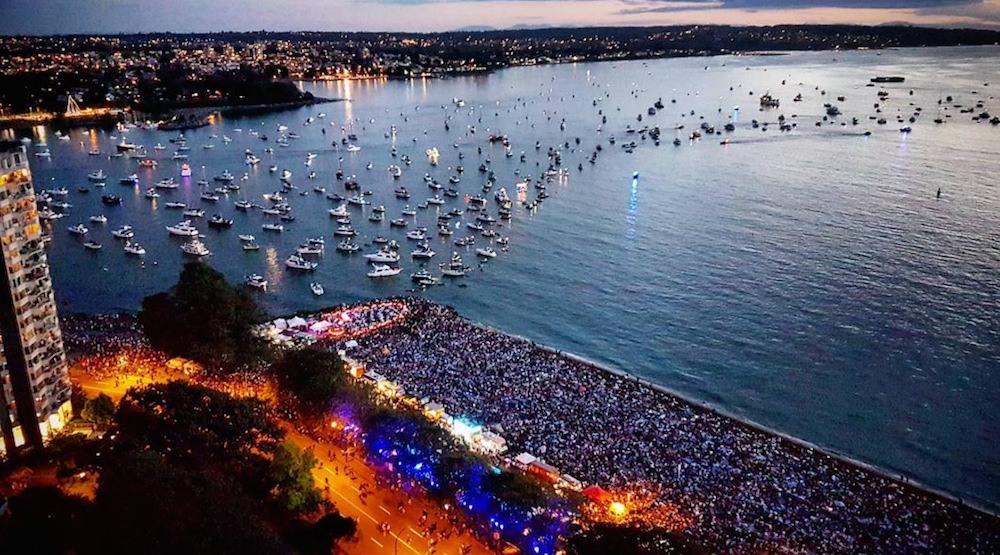 Last night’s attendance for the final Honda Celebration of Light fireworks show of the year likely broke records by a wide margin, to the extent that the Vancouver Police Department were forced to close English Bay Beach in downtown Vancouver’s West End just before the show began over capacity concerns.

This has never happened before in the 26 years of Celebration of Light history.

VPD Constable Brian Montague told Daily Hive that officers were forced to close all access to the beach at approximately 9:30 pm, about 30 minutes before the show began, because “there was simply no more room.” Instead, the crowds that were still pouring in were directed to the east and west along the seawall and Beach Avenue for viewing.

There were no incidents, apart from the usual liquor pours and two medical condition emergencies.

Event organizers and police are still compiling data for a final report on attendance figures, but Montague says it was easily 500,000 people for the area around English Bay. There were also nearly 1,000 boats in the water.

By 6:30 pm, about three and a half hours before the show, English Bay Beach was already packed with revellers – something that usually doesn’t happen until around 9 pm.

I decided to do some mingling at the beach with friends about 4 hours before the #CelebOfLight show, before I have to get ready to judge. It normally doesn’t get this busy until 9 pm, one hour before showtime. This is #Disney’s magic. #Vancouver #EnglishBay

Optimal weather, the long weekend, the night being the last show, and most importantly the Disney draw were all factors for the surge in attendance.

Typically, the Celebration of Light sees a maximum of 400,000 people for any show. For the first two shows, the Netherlands on Saturday, July 23 and Australia on Wednesday, July 27, an estimated 300,000 people attended both.

The winner for this year’s competition will be announced on Monday morning on Daily Hive.