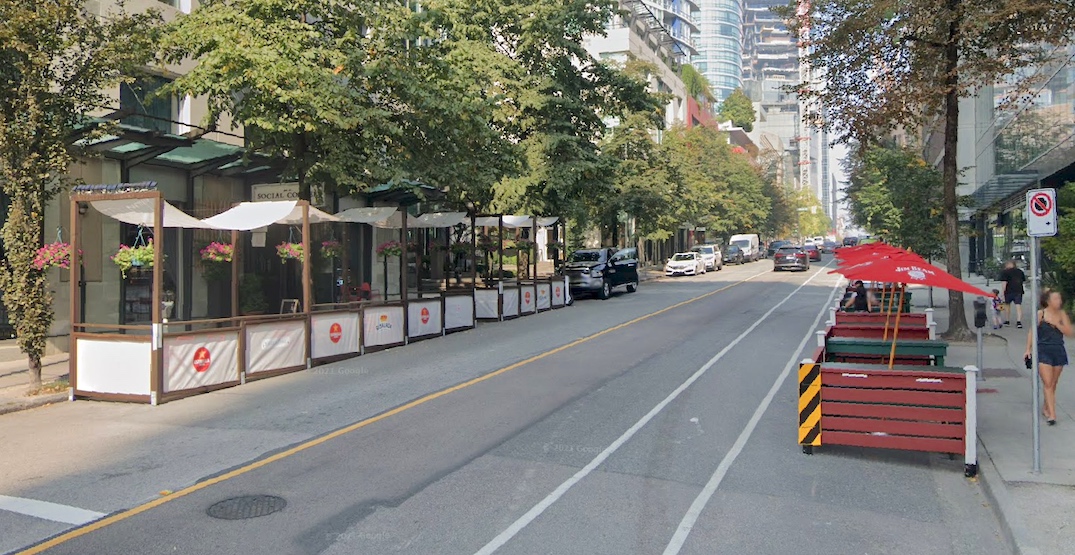 Curbside restaurant patios near the intersection of Homer and Smithe streets in downtown Vancouver. (Google Maps)

The Temporary Expedited Patio Program (TEPP) first launched in June 2020 as an urgent measure to help support struggling restaurants from strict indoor dining capacity restrictions will transition into a permanent program, following its repeated proven success and popularity with both businesses and the general public.

Not only did it save businesses and support employment during the pandemic’s peak economic fallout, but it provided for a more vibrant streetscape.

For the 2020 summer season, the city approved 421 patios under TEPP. This figure grew to 692 total patios for the 2021 season, including 516 patios in public spaces — 128 on sidewalks and 388 on curbside parking spaces. There were 176 patios in private spaces, such as street sidewalks that are technically on private property, and parking lots. Many of these businesses are small family-owned operations.

“I think we all heard very consistently from members of council and residents of the city, it shouldn’t have taken a pandemic, people love the patios. We’ve created a patio culture,” said independent councillor Sarah Kirby-Yung during the deliberations.

“I also recognize that it gave people a safe way to be outside, and quite honestly sustained many of our beloved local restaurants that I don’t think would have their doors open today if council had not enthusiastically supported the patio program and staff had not been able to pivot on the dime moving forward.”

TEPP’s current season is set to end at the end of next month. Moving ahead with a permanent program, the plan is to have a recurring summer patio season continue from April 1 to October 31 each year, with flexibility for increased capacity during the summer months.

But the one major change for the permanent program starting in 2022 is the instatement of patio fees, using the existing framework in place before the pandemic. TEPP in 2020 and 2021 was a free program, with all permit and application fees waived to support businesses at a time when they saw diminished cash flow.

The city intends to make a profit above the recovery of its administration costs of its overall patio program, continuing the pre-pandemic practice.

The new permanent summertime patio program is expected to increase the city’s costs each year by $682,000, including setting aside five full-time staff from the building and licensing department, and allocating traffic management equipment such as concrete barriers to ensure curbside patios on arterial roads are safe.

The fees collected from the new permanent program are estimated at $641,000, below the city’s budget, but this would be more than offset by the existing patio program’s revenues of $1.2 million — nearly three times the city’s cost of $468,000. Altogether, the city stands to see nearly a $700,000 profit, with combined city costs at $1.15 million and combined revenues at $1.841 million.

According to the city, a typical permit fee for a patio in a public street right-of-way ranges from about $450 for a small patio to an average of $2,800 for a large patio, varying in size and duration.

The city warns that it may no longer be able to approve the continued operation of some of the existing patios under TEPP, such as limited food establishments without public washrooms, “given their occupant capacity or patios on some arterial streets may not be viable as traffic volumes resume.” This is determined on a case-to-case basis when the city reviews application submissions.

City staff plan on launching consultation with the public and businesses on potential refined patio design guidelines in 2022. A review of the patio program and fee structure would also be conducted in 2022 to determine the fees for 2023.

During today’s deliberations prior to the final vote, city council also approved an amendment moved by Green Party councillor Pete Fry to have city staff develop guidelines that “ensure and enforce” accessibility for patios, given that many of the patios are on public spaces.