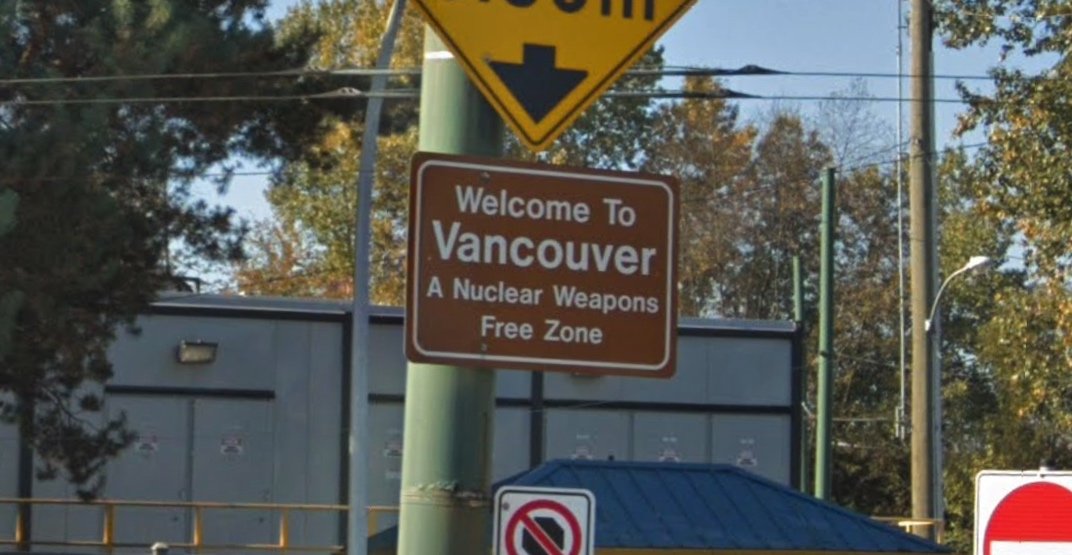 One of the City of Vancouver's remaining "Nuclear Weapons Free Zone" signs near the northwest corner of the intersection of East Broadway and Boundary Road. (Google Maps)

If one Vancouver city councillor has his way, the city could soon have a new stance on the global proliferation of nuclear weapons.

Next Tuesday’s Vancouver city council meeting is scheduled to include a deliberation of Green Party councillor Pete Fry’s motion of the municipal government placing “itself on record as endorsing the Treaty on the Prohibition of Nuclear Weapons” and calling on the federal government to sign and ratify the United Nations treaty.

Numerous countries including Canada, United States, Australia, Russia, China, Britain, India, and Pakistan have not agreed to the treaty.

But Fry wants the city’s voice to be heard on the matter, continuing Vancouver’s “long history of local peace and anti-war activism” that emerged during the Cold War, particularly during the 1970s and 1980s when longer-range ballistic missiles capable of carrying nuclear warheads were developed.

This was an era when fears over a nuclear winter were on the same level as today’s concerns for industrialization-induced climate change.

The city council that was around in 1983 approved a policy to designate Vancouver as a “nuclear weapon-free zone,” and this policy was even symbolically visible with the installation of signs at the entrances into the city.

Some of the signs were removed ahead of the Olympics; one sign that still remains is located near the northwest corner of the intersection of East Broadway and Boundary Road, just outside the McDonalds.

“The City of Vancouver has consistently supported citizens’ initiatives for a more peaceful world grounded in the principles of non-violence and the peaceful resolution of conflict within communities and internationally,” wrote Fry.

“Throughout the 1980s, the City of Vancouver was a title sponsor for the ‘Walks for Peace’ drawing up to 100,000 participants.”

In the book Canadian Nuclear Weapons: The Untold Story of Canada’s Cold War Arsenal, by historian John Clearwater, Canada during the peak of the Cold War was in possession of hundreds of nuclear weapons, built and operated by the US, that acted as a defence against the Soviet Union. These ranged from surface-to-air ballistic missiles, short-range ballistic missiles launched from trailers, tactical thermonuclear bombers, and the VooDoo-Genie air defence system.

No nuclear weapons were ever produced by the federal government, but Canada clearly had the resources to conduct its own nuclear program given that the country has the technological know-how and the world’s largest uranium deposits. Canada’s weapons systems were armed by US nuclear warheads between 1963 and 1984.

“We are thus not only the first country in the world with the capability to produce nuclear weapons that chose not to do so, we are also the first nuclear-armed country to have chosen to divest itself of nuclear weapons,” said Prime Minister Pierre Elliott Trudeau in 1978.

In 1984, Canada sent back the remaining nuclear warheads, approximately 50 bombs, to the US, ending the country’s nuclear weapons defence era.

While nuclear weapons are certainly not absent from Canada, they are not far away, especially from Vancouver.

According to the Seattle Times, US Naval Base Kitsap (formerly known as Bangor) — located west of downtown Seattle on the Olympic Peninsula in Puget Sound — is home to as many as a quarter of America’s roughly 10,000 nuclear weapons, with the base’s weapons located within storage and armed on nuclear-capable submarines.

“Bangor’s submarines and its heavily guarded SWFPAC storage facility make it perhaps the largest single repository of active nuclear weapons in the world.

“At any given time, depending on sub deployment, nuclear weapons sufficient to wipe out much of humanity are located 20 miles northwest of Ivar’s Acres of Clams. If existing political lines were erased from the global map, the Puget Sound area would likely be among the world’s three largest nuclear powers.”

To get a sense of the impact a single nuclear weapon could have on Vancouver, here are three examples of a surface detonation at the intersection of Homer Street and Nelson Street in downtown, based on three historical yields (click on each map for further details on the very rough scientific estimate of the impact and fallout): 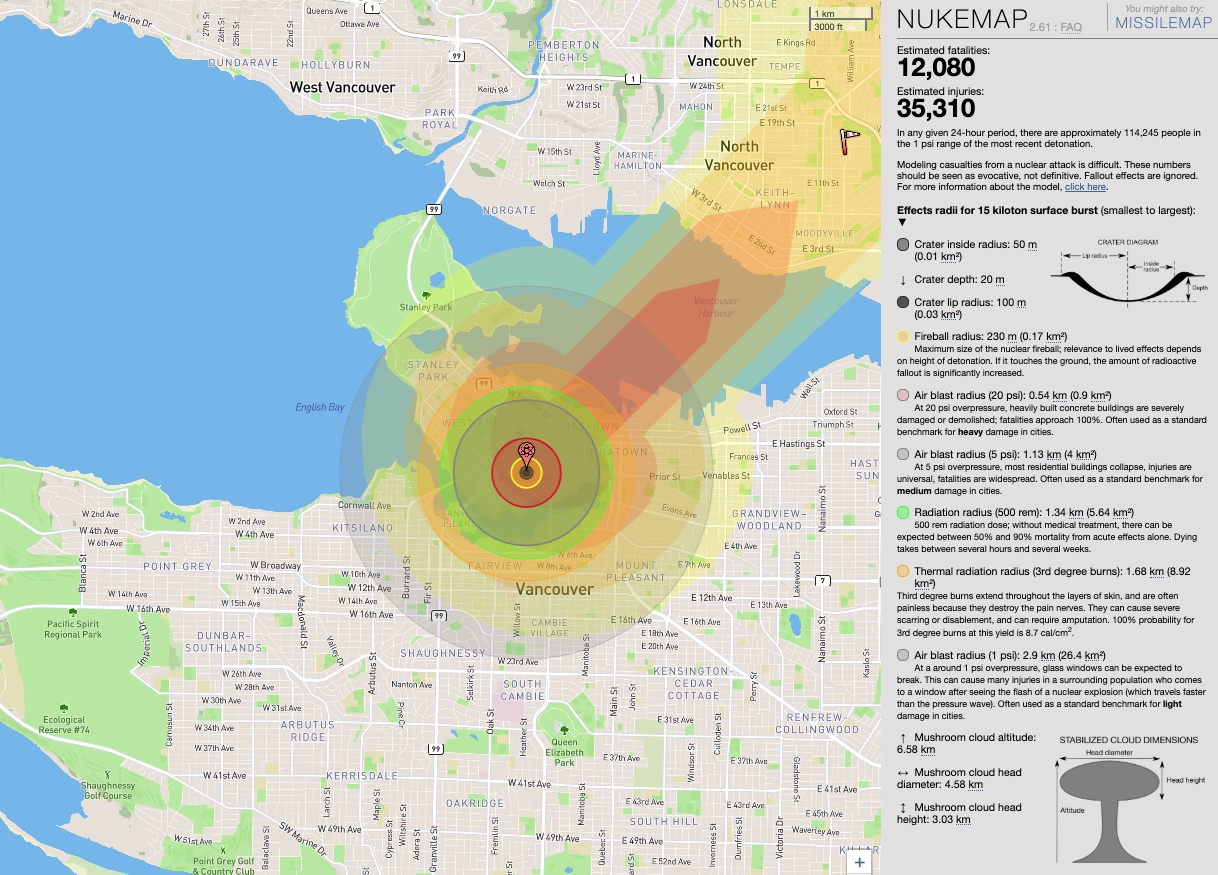 Impact of a 15 KT nuclear bomb exploding at the surface of the intersection of Homer Street and Nelson Street in downtown Vancouver. Click on the map for enlarged details. (Nuke Map) 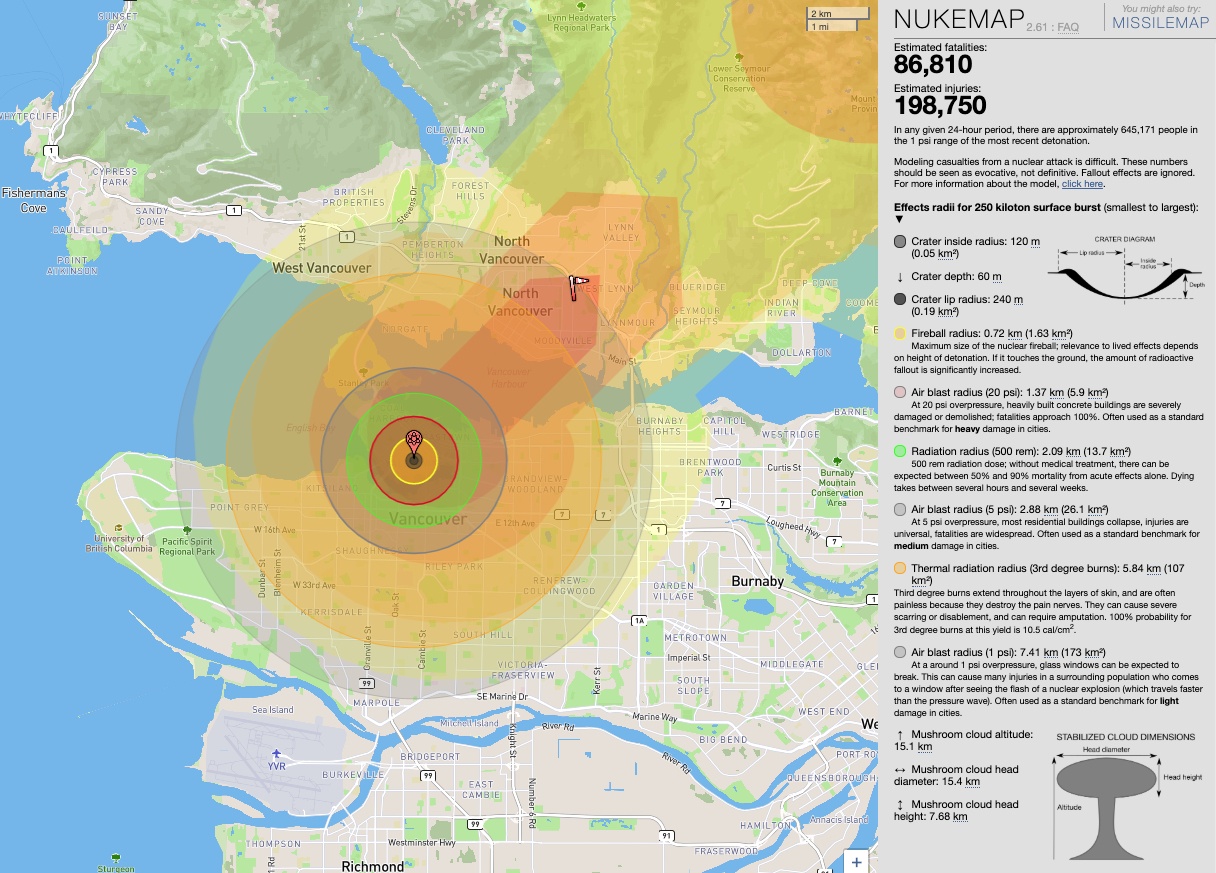 Impact of a 250 KT nuclear bomb exploding at the surface of the intersection of Homer Street and Nelson Street in downtown Vancouver. Click on the map for enlarged details. (Nuke Map) 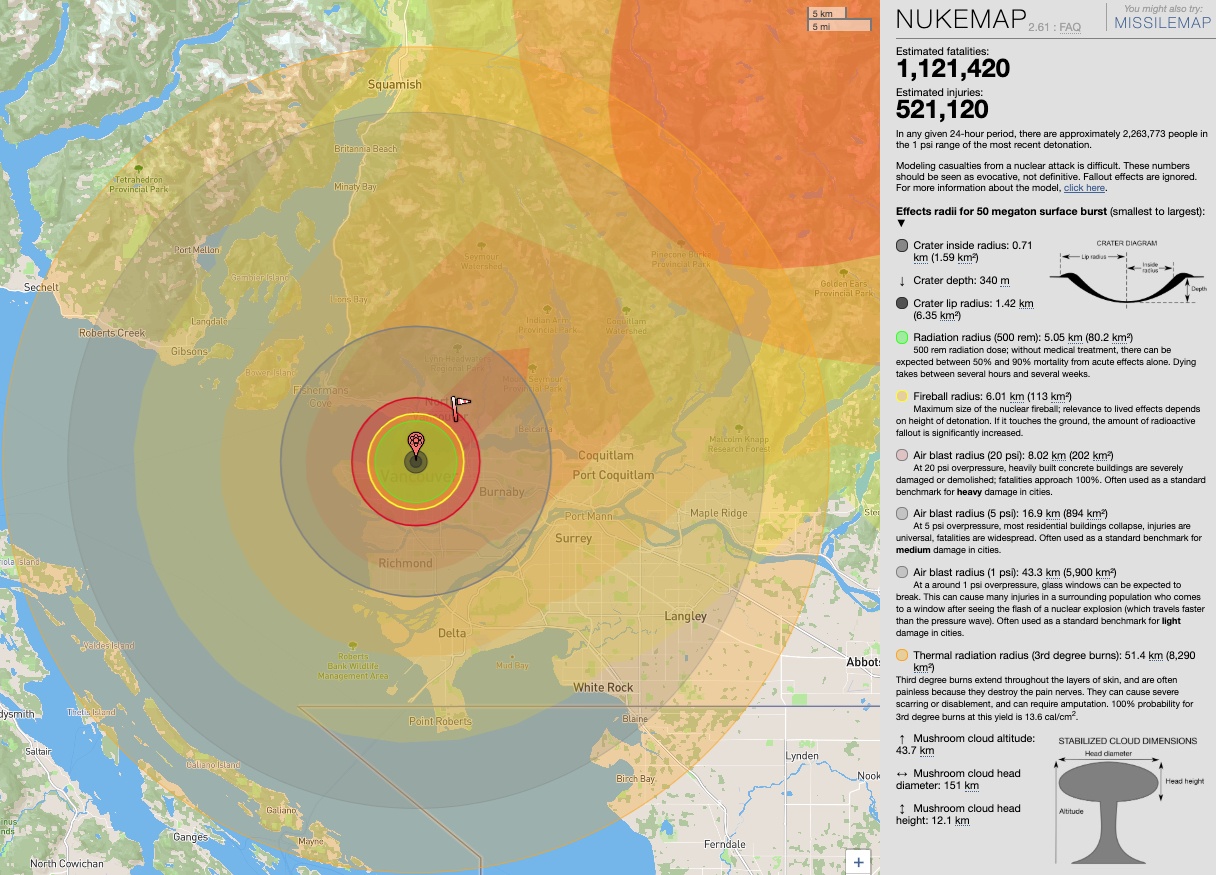 Impact of a 50,000 KT Tsar bomb exploding at the surface of the intersection of Homer Street and Nelson Street in downtown Vancouver. Click on the map for enlarged details. (Nuke Map)