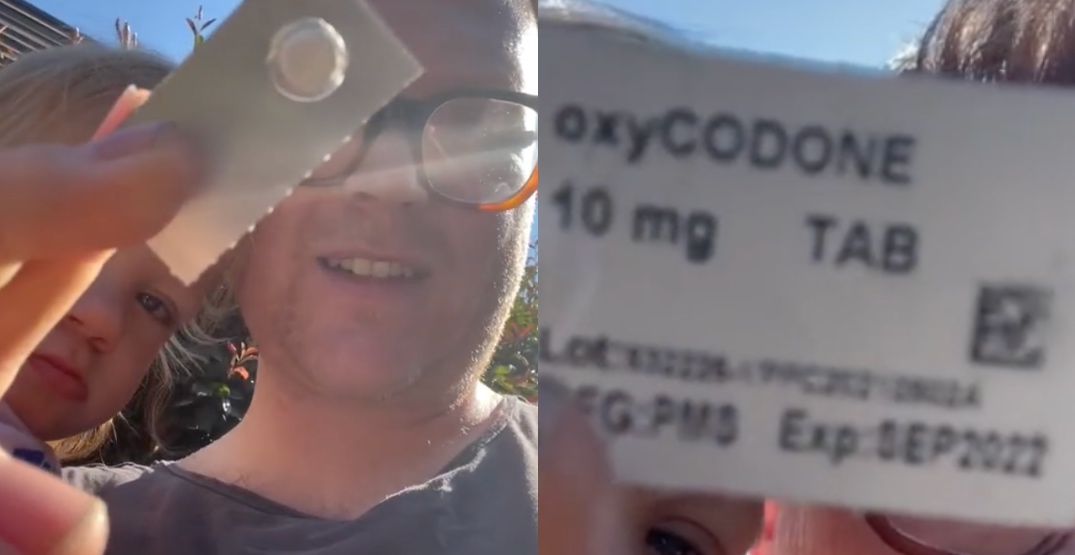 A TikTok is sparking a conversation about drug use in Vancouver neighbourhoods after a Vancouver dad snatched an oxycodone tablet from his young child.

Rob Trendiak, a photographer living in Mount Pleasant, was walking their dog with their 16-month-old daughter.

“I was letting her walk around while my dog was doing his business and I noticed my daughter reaching for some garbage. However it wasn’t garbage, it was a tab of Oxy,” he told Daily Hive.

“Oxy”, or Oxycodone, a prescription opioid, is used to manage pain. It can become habit-forming and lead to dependence.

“It was a scary moment for me as my daughter picked up drugs that could make her seriously ill or even worse could have killed her.”

Trendiak made a TikTok explaining how he feels as a parent in his neighbourhood following the incident.

According to Trendiak, his daughter found the drugs at a city park at Main Street and East 7th Avenue, which has been “piling up” with garbage since it opened.

“We’ve tried to contact the city about it but with no success. Either no one responds through the app or the phone lines are too backed up for them to take our calls.”

According to the City, the site at Main and 7th will be a future permanent park, but it’s current condition is temporary until summer 2023 until the final design is found.

“Park Board staff assess the site weekly and check up on conditions of the park space and respond quickly to any comments or concerns that are received,” said a rep.

“Recently, we started to see litter build up and have already ordered garbage receptacles to be placed on site. They will arrive this week.”

The City said that they have crews working 24/7 to empty waste bins and in the summer they are especially busy.

“If the public does see an overflowing waste bin, please report it via the Vanconnect app or call 311 and we’ll send a crew to empty it as soon as possible,” said the City.

“I truly do feel torn between loving this city and wanting to raise my kids here, but also feeling helpless when it comes to certain social issues,” said Trendiak.

“Creating this video has caused some intense conversations on TikTok and I think that’s a good thing.”

“It has even taught me a few things like I can take found drugs to a pharmacy to be properly disposed of.”

“Ultimately I love Vancouver and want to actively help make my community better.”

Trendiak also apologized for any assumptions made about drug users in his initial video.

“If I made anyone feel marginalized by my comments I am truly sorry. I just know that the opioid crisis in Vancouver is real and that every community is being affected by it.”

“Conversations are a great way to educate people and gain the attention of officials to take steps in the right direction to start the complex process of solving this issue. If nothing else, my video started a conversation.”

Vancouver has been in a state of emergency since April 2016 due to an unregulated, toxic supply of drugs causing preventable deaths in the city. In October 2021, at least 200 deaths were attributed to toxic drugs.