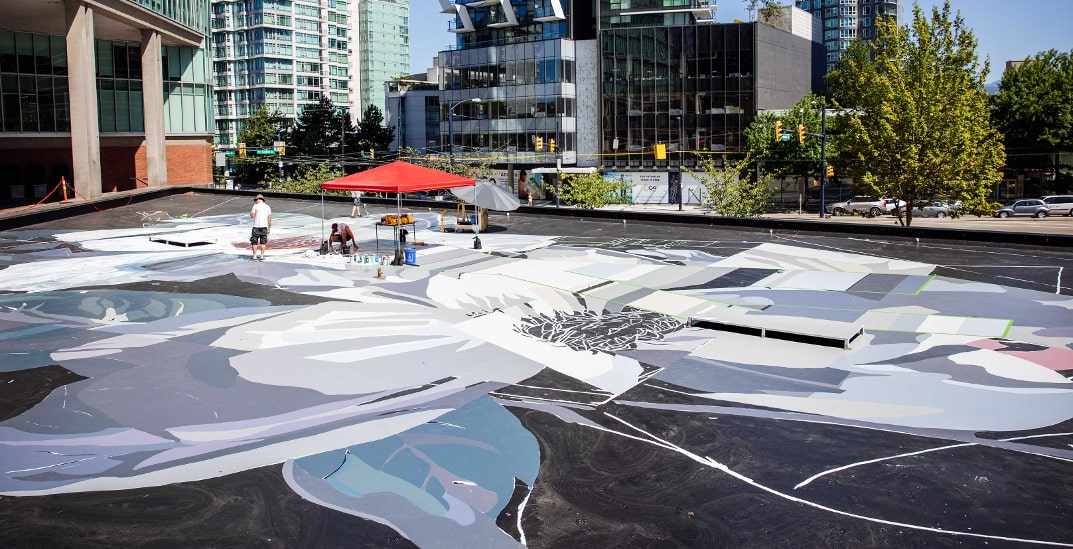 The final week of Vancouver Mural Fest (VMF) 2021 is upon us and there is still so much to see and do! Eclectic live performances at an open-air, pop-up patio, interactive tours, insightful artist talks, and more. Plus there are over dozens of new murals to discover.

Over 60 murals are being painted and unveiled in 11 different neighbourhoods this year, from East Vancouver, West End, and even North Vancouver, the first time in festival history that VMF has expanded outside of the City of Vancouver. 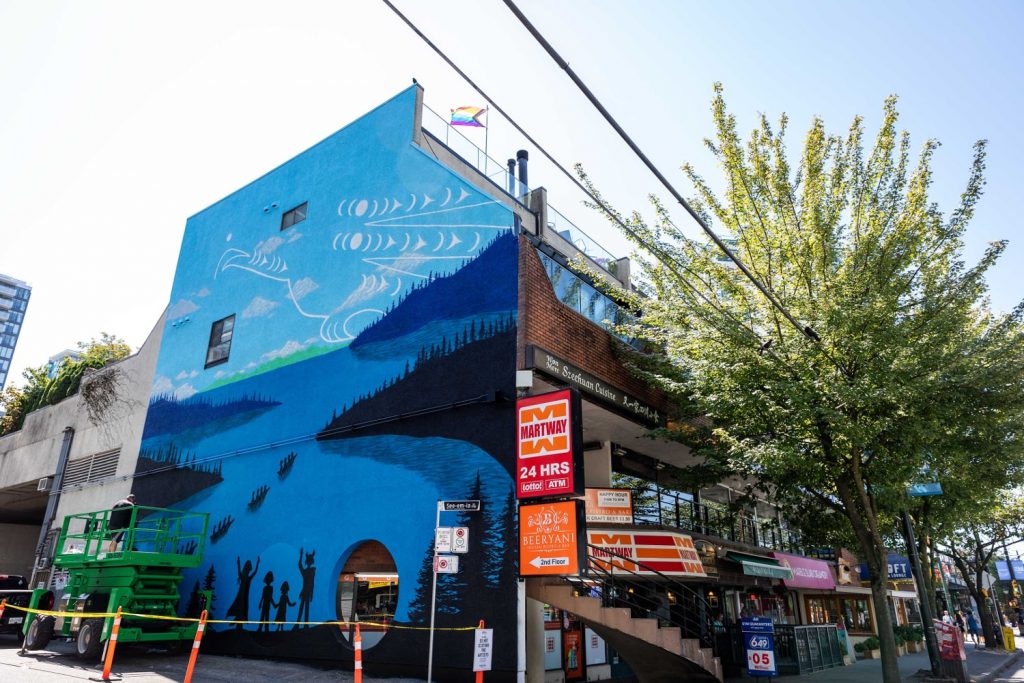 VMF is also offering a range of contest prizes from many of the festival neighbourhoods. Learn how you can enter on the VMF Blog. And after seeing the massive murals, make sure to explore the different neighbourhoods. Each has many unique places to discover while on your public art adventure.

Cambie Village is a new neighbourhood to VMF and can be accessed via three Canada Line stations. The “Heart of Vancouver” is located on Cambie Street from West 5th to King Edward Avenue, and is home to Vancouver City Hall, big-box retailers and local merchants, and more. You can also follow Cambie south to find Queen Elizabeth Park, the highest point of Vancouver and home to the Love Locks Structure. Supported by the Cambie Village BIA.

Downtown Vancouver is well known for transforming and reimagining public space.  Locations such as Alley Oop, Ackery’s Alley, and Canvas Corridor in Eihu Lane are all great examples of how public art can be integrated into the city. For more artistic explorations, visit the Vancouver Art Gallery and the eighteen VMF murals located Downtown, five of which are part of the 2021 festival. Supported by the Downtown Vancouver BIA.

Just minutes away from the Capilano Suspension Bridge, Edgemont Village is described as having a mountain resort town vibe. It’s a great place to stop for lunch or dinner on your way to Grouse Mountain or the Salmon Hatchery and of course to see amazing murals. To continue getting your steps in, Edgemont Village is connected to the Murdo Frazer Park walk and the Mosquito Creek walk.

Hogan’s Alley is a historic neighbourhood that was originally situated between Union and Prior Streets from Main Street to Jackson Avenue. Learn more about Hogan’s Alley with Black Strathcona Resurgence Project (BSRP), VMF’s community project that sees the festival partnering with local Black artists, curators, businesses and communities to reclaim visibility and reconcile the erasure and systemic racism endured over time by Black people in Vancouver.

Marpole is one of Vancouver’s oldest neighbourhoods. Visitors can see the Musqueam Midden cairn at Marpole Park, deemed a National Historic Site over 80 years ago and now under the protection of the Musqueam people. The area is also home to many modern shops, including helpful retailers and delicious restaurants ready to serve you. Supported by the Marpole BIA

Mount Pleasant is the original home of VMF and spans False Creek southeast and up towards the Mount Pleasant shopping district, where Broadway, Kingsway, and Main Street intersect. The area is a popular destination for its wide range of independent local businesses, cafes and craft breweries, and more. There are over 100 murals to check out in the area, as well as the VMF Pop-Up Patio presented by Granville Island Brewing at Main + 5th. Supported by the Mount Pleasant BIA.

Punjabi Market on Main Street between 48th and 51st Avenues was the first and largest South Asian Market in North America. It was home to the first Punjabi-language street signs outside of Asia and was home to over 300 shops at its Peak. Punjabi Market celebrated its 50th anniversary in 2020 and remains an important community hub. Murals in the Market is a partnership between Punjabi Market Regeneration Collective and VMF and aims to boost BIPOC artists as well as bring visitors back to the commercial district.

The River District in South Vancouver is a residential and commercial development that spans 130 acres of land. Along with amazing views of the Fraser River and shopping and dining, the area also features the Fraser Foreshore Trail and Riverfront Park. River District has added 11 new murals for VMF 2021 in a gallery titled, “Garden Path”.

South Granville has one of the highest concentrations of galleries in Vancouver, so it’s a great place to get your art on. The area is a beloved summertime hub, with a wide variety of shops and restaurants to enjoy while out on a mural gazing day. Supported by the South Granville BIA.

Strathcona is home to a vibrant Vancouver arts scene and is also one of the city’s key gallery districts. Along with exploring the neighbourhood to discover the many murals, make plans to check out the numerous craft breweries including Luppolo Brewing, Strathcona Beer and Container Brewing. Supported by the Strathcona BIA.

The West End is celebrated for its culture of celebratory inclusivity and prideful diversity. Davie Village has many exciting places to discover on your visit, including colourful laneways, unique eateries and shops, and an iconic rainbow crosswalk. The West End features eight VMF murals, four of which were created for this year’s festival. Supported by the West End BIA and Vancouver Pride Society.

DOWNLOAD THE VMF MOBILE APP to find and learn about over 300 murals, including 60+ new murals being painted across the city during Vancouver Mural Festival 2021, until August 22.

There are 11 neighbourhoods to discover, including Cambie Village, Downtown, Edgemont Village, Hogan’s Alley, Marpole, Mount Pleasant, Punjabi Market, River District, South Granville, Strathcona and the West End. You may even see the astounding artworks being created in real time.

Plus check out the neighbourhood pages at https://vanmuralfest.ca/ and @vanmuralfest on Instagram to discover how you can win amazing prizes from many of the mural neighbourhoods!