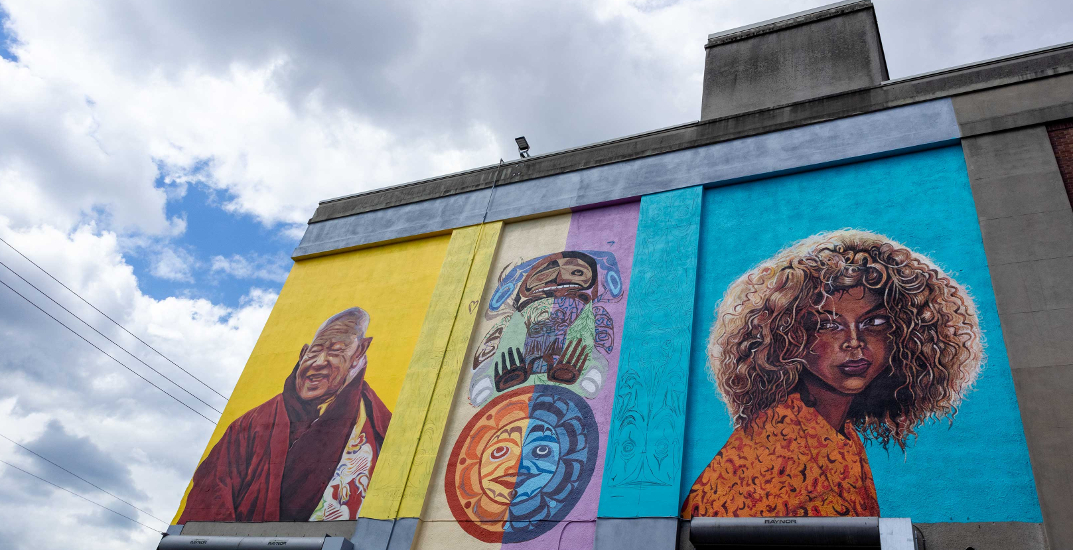 A massive trio of murals unveiled during Vancouver Mural Fest (VMF) is highlighting the importance of representation to the festival and the city.

The artwork is part of VMF’s Black Strathcona Resurgence Project and according to an Instagram post shared by BSRP Curator Krystal Paraboo, the mural “is intended for community healing and building towards our futures in solidarity in the city.”

“The location of this building is at the intersection of Chinatown and Hogan’s Alley, and is ultimately on the unsurrendered ancestral territories belonging to the Sḵwx̱wú7mesh (Squamish), Səl̓ílwətaʔ/Selilwitulh (Tsleil-Waututh) and xʷməθkʷəy̓əm (Musqueam) Nations,” Paraboo said in her Instagram post.

“The vision for this mural was to interweave Chinese, Black and Indigenous culture and presence in a vibrant and dynamic manner building towards a decolonized future collectively. In solidarity with one another, each panel depicts layers of storytelling from the aforementioned communities that reflect elders, youth, queer & 2-Spirit identities.”

“VMF treats public art projects a bit like a trojan horse. Art can cloak important social issues in celebration and creativity. Pieces like these are our vehicles to drive conversations forward in a positive way, and ensure a diversity of styles and expressions.”

In addition to BSRP, other VMF 2021 featured Community Projects include Blanketing The City IV: Cathedral Square and Punjabi Market: Murals In The Market.

“Diversity, inclusivity, and community-building are a fundamental commitment and an ongoing process for VMF both internally, and in the work we do in public spaces,” explained Curtis. “Not all organizations’ work shows up quite as publicly as ours does, and so the murals and events must take into account a reflection of the community that we’re operating in.

“We spend thousands of hours every year in communications and consultations with community groups in the areas in which we work, and they’re always rich in story, history, and varied cultural backgrounds. It’s an honour to represent these experiences and paint them large across the facades of our city.”

This year’s festival features over 50 percent female/non-binary and BIPOC artists, including many eye-catching murals created by Asian artists. These artworks include:

According to the mural statement, Resilient Chinatown is a celebration of today’s Chinatown community, while also honouring and acknowledging their solidarity with Hogan’s Alley and Musqueam, Squamish and Tsleil-Waututh communities.

“These faces represent both the younger and older generations of the Chinatown community, and their spirits of tenacity, resilience and joy. The orange trees, plum flowers and bright lanterns represent the community’s incredible perseverance, reclamation and cultural healing.”

Ripple was painted with the goal of producing a soothing, calming atmosphere, according to the mural statement.

“It faces a senior’s home in Strathcona and was created to be enjoyable for those who’ll see it most often. The waves and the lilies create a sense of tranquil rhythm, while the pops of colour lend the image its visual excitement. The viewer can note how the graphic shapes mirror the more highly rendered details and how the small fishing boat juxtaposed with the oversized koi fish creates an air of whimsy, sparking the imagination.”

Ripple can be found at 1001 Venables Street in Strathcona.

Grace Cho – In The Garden

The mural statement for In The Garden explains that the artwork was inspired by the importance of rest in a world that tries to measure people by how productive they are. In The Garden shows figures relaxing in a lush garden, and hopes to motivate people to find moments of peace, joy and rest during their busy day.

Ethereal Paradise speaks to Asian cultures through its design inspired by the floral motifs commonly found on rice cookers, according to the mural statement.

“Abstract florals create a dialogue between viewer and mural. It explores memory, heritage, nostalgia, and family through the lens of a first-generation Asian-Canadian. The unconscious movement of painting produces a learning experience for viewer and artist alike, as expressions in spray paint mechanics take the lead.”

Ethereal Paradise can be found at 4008 Cambie at W.23rd Ave in Cambie Village.

Be Like Water is a joyful celebration of fully appreciating your surroundings and finding magic every day, according to the mural statement.

“In this mural, humans, nature, and spirituality exist in harmony. The Marpole neighbourhood, being close to the Fraser River, is an area with great biodiversity. Certain elements of nature, such as fish, often take on different symbolic meanings to different cultures. In Chinese culture, fish represent abundance. In Mandarin “fish” and “luck” sound the same but have different meanings. Here, the person riding the fish finds happiness through the journey itself, as they move through the water.”

Be Like Water can be found at 8377 Granville Street in Marpole.

South Vancouver is also home to the River District’s expanded Mural Gallery, with a curated collection of 10 new murals with a “Garden Path” theme leading to the Fraser River walkway. Murals in this collection include works by Mariko Ando, Hyerim Yoon, Seeroro (Carolyn Wong) and more.

DOWNLOAD THE VMF MOBILE APP to find and learn about over 300 murals, including 60+ new murals being painted across the city during Vancouver Mural Festival 2021, until August 22.

There are 11 neighbourhoods to discover, including Cambie Village, Downtown, Edgemont Village, Hogan’s Alley, Marpole, Mount Pleasant, Punjabi Market, River District, South Granville, Strathcona and the West End. You may even see the astounding artworks being created in real time.

Plus check out the neighbourhood pages at https://vanmuralfest.ca/ and @vanmuralfest on Instagram to discover how you can win amazing prizes from many of the mural neighbourhoods!