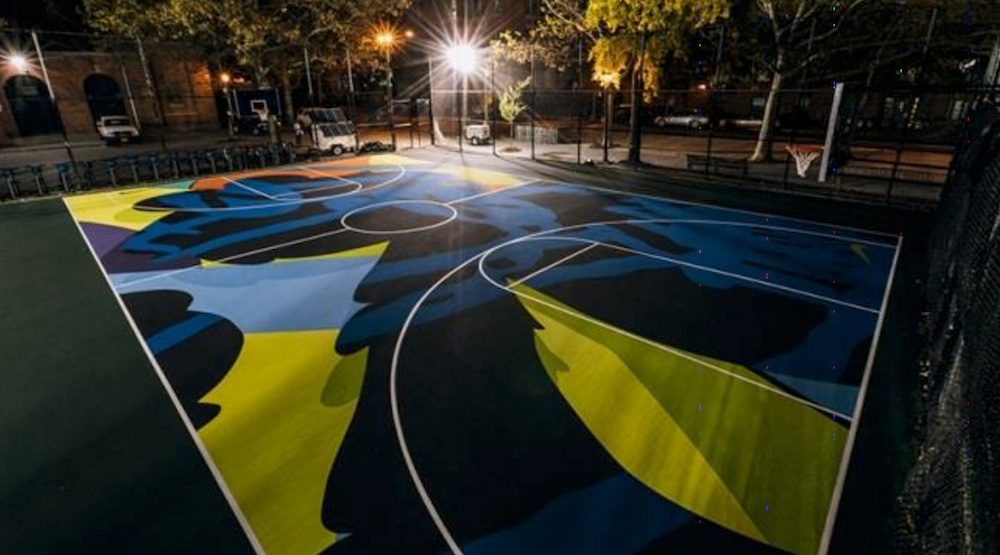 A basketball court mural in New York City's Manhattan East Side funded by Nike in partnership with the NYC Department of Parks and Recreation. (City of Vancouver)

A basketball court in Vancouver’s Mount Pleasant Park will become the canvas for a new mural art piece just in time for the Vancouver Mural Festival next month.

Last night, the Park Board approved a $35,000 fund to allow organizers to commission local artist Scott Sueme to paint a mural on the basketball court surface.

A staff report states the mural will be “an abstract in water tones of green and blue” with a theme of fluidity that reflects the history and current use of the site, including the movement in basketball, water and its relationship to the park, and as a constant of Sueme’s mural style.

“The mural will signal Park Board’s support of the arts and sports and the understanding that they are both participatory activities which can co-exist in the same spaces and places,” reads the staff report.

“This is a message which is appropriately located in a central location in a neighbourhood which is becoming known as Vancouver’s mural district.”

It is estimated the mural will have a lifespan of between five and 10 years with periodical maintenance, which will occur throughout the year. The cost of the mural includes the cost of ordering extra paint to conduct touch ups and graffiti removal.

“This project will be a source of ongoing pride due to the standard of maintenance which will be provided,” the report adds.

The Mount Pleasant basketball mural project takes inspiration from several similar installations around the world, including Nike’s ‘New York Made’ campaign last year in Manhattan’s Lower East Side in partnership with the NYC Department of Parks and Recreation.

The second annual Vancouver Mural Festival takes place from August 7 to 12 across the Mount Pleasant neighbourhood and involves 60 local and international artists. In addition to the new murals, there will also be markets, live music, and activities for the family.