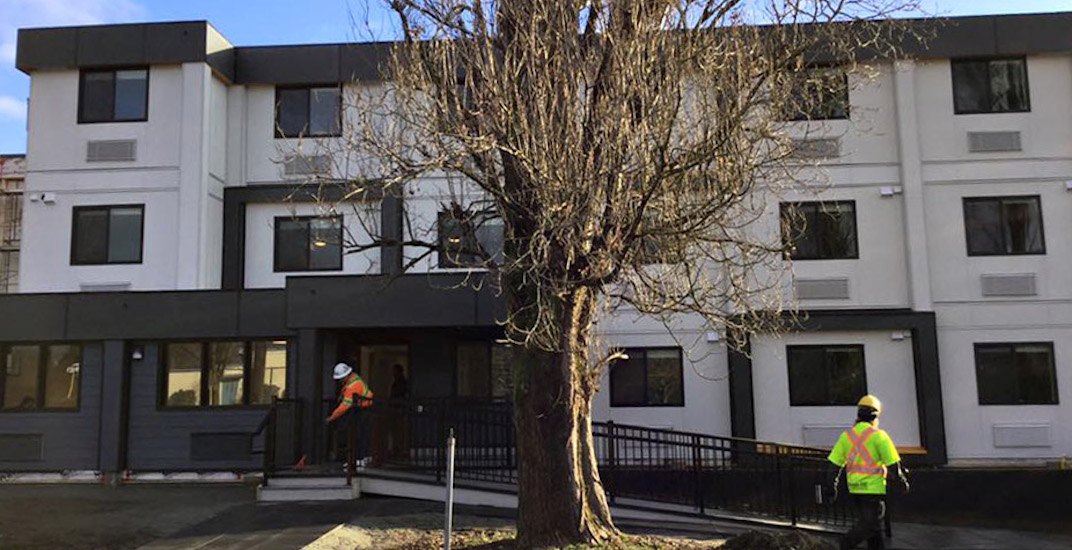 Construction on the modular housing buildings at the southwest corner of West 57th Avenue and Cambie Street – on the site of Onni Group’s redevelopment property at Pearson Dogwood – in the Marpole area is nearing completion.

There are two three-storey modular housing buildings with 78 single-occupancy units on the site, which can be used for modular housing for the homeless for a period of up to five years under the approved development permit. Each unit is about 250 sq. ft. in size, and includes its own bathroom and kitchen.

Like the municipality’s first modular housing project at the corner of Main Street and Terminal Avenue, it has communal amenity space and laundry facilities.

The housing development was initially set for completion in early-January 2018, but it was delayed due to fervent neighbourhood opposition that escalated into protests that blocked construction crews from entering the site.

Opposition was largely from local residents who did not want the social housing to be in their neighbourhood and within close proximity to schools in the area.

The impasse from the protests only ended after the City of Vancouver was granted an injunction in court in early-December.

Modular structures cost just a small fraction of a permanent conventional structure, can be built in a timeline of just a few weeks, and can be disassembled and reassembled at another site. They are usually constructed out of shipping containers or other prefabricated parts.

The project is funded by the provincial government’s $66-million budget to build 600 modular housing units in the city.

Five modular housing sites within Vancouver have now been announced, and 260 units of modular housing are currently in the development process. A modular housing project has been approved for the Downtown Eastside, and two other projects have been proposed for sites immediately adjacent to 29th Avenue Station and Olympic Village Station.