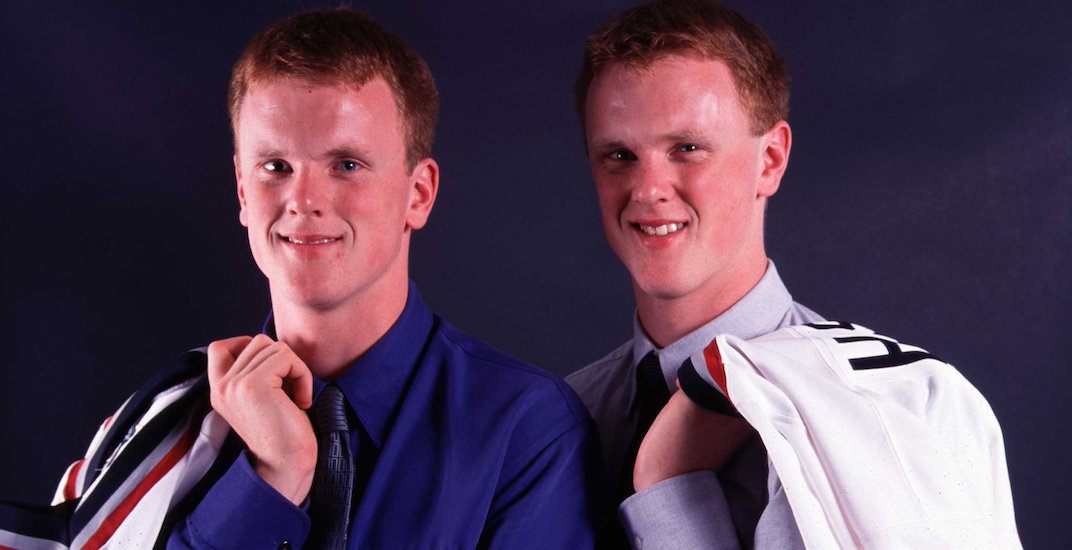 Henrik and Daniel Sedin stole all the headlines on Monday, announcing that they will retire after this season. It sparked an incredible outpouring of emotion, as everyone shared their favourite memory about the greatest Canucks players of all-time.

And I mean everyone.

Mike Gillis appeared on Vancouver radio for the first time since being fired as Canucks GM nearly four years ago. Brian Burke went on the air too.

And why wouldn’t they?

My favourite Sedin moment has nothing to do with their performance on the ice. Instead, it comes after one of my many surgeries. I woke up in my hospital bed and one of the first faces I saw was that of Henrik Sedin. One of the happiest moments of my life #ThankYouSedins

Everyone loves the Sedins.

But it wasn’t always that way. In many respects, Canucks fans are lucky Henrik and Daniel stuck with them.

Long before opponents and their fans rudely called the Sedins “sisters,” Canucks fans were doing it. Not all fans, of course, but a significant number of them.

They were too soft, too slow, too Swedish.

To be fair, they had slow starts to their careers. Daniel Sedin scored 20 goals in his rookie year but was unable to match that mark until his fifth season. Henrik never scored more than 42 points in a season in his first four years.

They didn’t have the look of players who would develop into All-Stars one day, nevermind league scoring champs.

And they were raked over the coals by many people. They were ridiculed for their demeanour.

But even as their play improved, the accolades were slow to come.

Lucky for us, this story isn’t about Ryan Kesler and Nikita Tryamkin.

Instead of complaining, instead of feeling sorry for themselves, they went to work.

My biggest Daniel Sedin story is when I saw him at White Spot for dinner with his family and he waited for a table for 10 minutes. Just put his head down and grinded out that wait like the rest of us. #OneOfUs

They got stronger, they got faster.

People complained that their cycle was ineffective, but they never abandoned the way they played. They just worked even harder.

Eventually it began to click for the twins, as they broke out for 75 and 71-point seasons respectively in 2005-06.

Who got the headlines? Anson Carter. Who got the team MVP, as voted by the fans? Alex Auld.

The closest the Canucks ever came to losing the twins came in 2009, when Mike Gillis flew to Sweden in a last ditch effort to sign them. Fans at the time weren’t as worried about losing them as they should have been given that these were two point-a-game players the season prior.

The Sedins have been so criminally underrated in their careers that I write about it on an annual basis and it’s always topical.

In their first year as first-line players, they scored 84 and 81 points apiece – in a defence-first system under new head coach Alain Vigneault.

What did callers to local radio stations say? Often something along the lines of “they’re very good second-line players, but they’re not first liners.”

Eventually the twins won over the fanbase – boy did they ever.

Fans and media in other markets began to treat the Sedins unfairly, questioning their integrity, their desire to win, and their manliness.

Canucks fans leaped to their defence on social media, and for good reason.

These are two of the classiest players to ever play hockey – period. To not respect them because of how they look, where they’re from, or because the fact that they’re identical twins, is just ignorant.

I was lucky enough to have had a chance to play with Hank and Danny for 8 seasons. Two of the greatest players of all time. The best of teammates I’ve ever had and the nicest people you’ll ever meet! They truly were great ambassadors for the game.

Eventually the rest of the league caught up – and not a second too soon. They’re getting their due, as support for them entering the Hall of Fame has popularized.

In many ways, we’re lucky.

We’re lucky the Sedins didn’t give up and return to Sweden early in their careers. We’re lucky they didn’t hold resentment over what some ignorant people said about them and re-signed with the team in 2009. We’re lucky to have watched them play for 18 years.

The response for the Sedins on Tuesday in their second-last home game was unlike anything we’ve ever seen in Vancouver. Trevor Linden got a nice goodbye, Pavel Bure and Markus Naslund got wonderful ovations when their jerseys were retired – but nobody has ever had an all-game love in.

And it’s sure to be even bigger and better on Thursday.