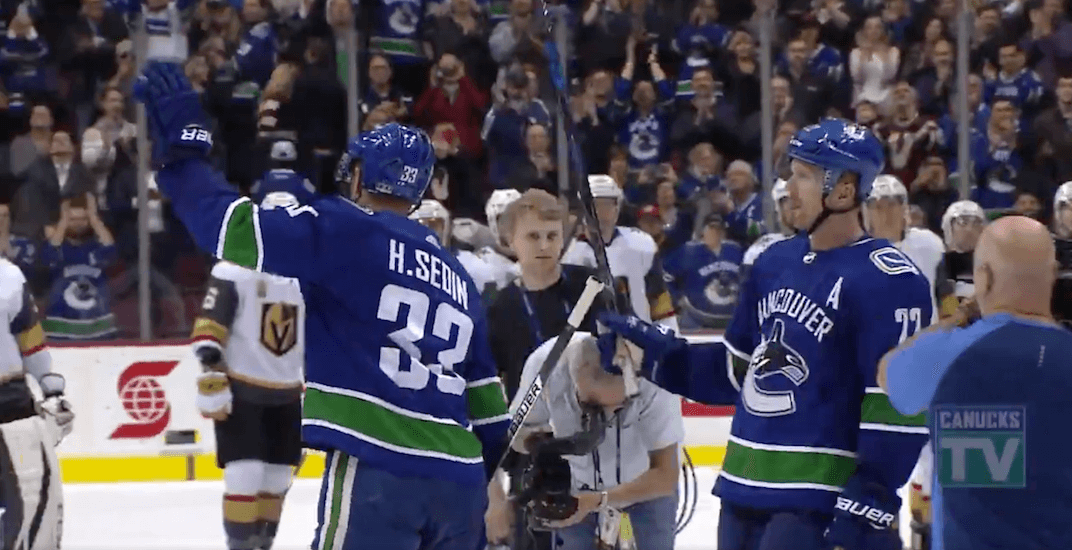 What a night at Rogers Arena.

After announcing their retirement Monday morning, Tuesday’s home game against the Vegas Golden Knights was obviously a big deal.

I’m not sure they had this many people arrive for warmup during the Stanley Cup Final pic.twitter.com/tUIby6gtEC

With just two home games left on the schedule, time is running out for Vancouver Canucks fans to show appreciation to their franchise players, so they took full advantage of every second of Sedin time.

A standing ovation, followed by a Sedin salute and a line-up of Golden Knights eager to show their respect for Henrik and Daniel. #ThankYouSedins pic.twitter.com/b0GN7L5KKh

It started before the game even started, the crowd was on their feet cheering when the Sedins took to the ice.

It was a playoff atmosphere in Rogers Arena, with fans roaring and plenty of Sedin signage around.

Although the Sedins only had one point on the scoresheet (a Daniel Sedin assist) they had some great and nostalgic shifts hemming the Golden Knights in their own end and reminding fans of what made them such unique and iconic players.

In the third period, fans gave a spontaneous ovation for Henrik and Daniel, who were feeling the love, waving to the crowd.

When #Canucks fans saluted Daniel & Henrik saying #ThankYouSedins during a stoppage in play, the Sedins said thank you right back. pic.twitter.com/xHHi8N5W5H

The game itself turned out to be pretty entertaining. The Canucks rallied from a 4-1 deficit in the third period to force overtime and eventually a shootout.

Despite not much shootout success in their careers, the Sedins each got an opportunity in front of an anxious home crowd. Daniel hit the post while Henrik was stopped by Malcolm Subban and the Golden Knights went on to win the game.

Afterwards, fans stayed for one last cheer, and the Sedins saluted them. Even the Golden Knights stuck around to shake Henrik and Daniel’s hands.

The Sedins play their final home game on Thursday against the Arizona Coyotes, and you can bet that one will be even more emotional.