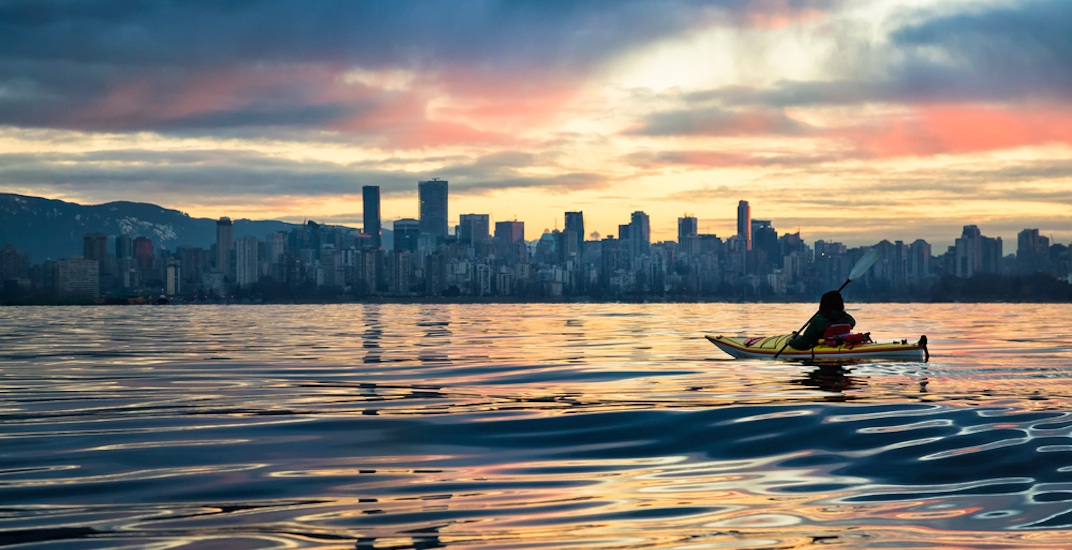 A kayaker in English Bay and the downtown Vancouver skyline. (Shutterstock)

The mild climate and the general West Coast natural appeal is not enough to push Vancouver up the rankings in the preference of Canadians looking for a home, as the average price of one in the city is likely keeping many from considering moving.

The findings of a new survey by Finder.com released today concluded that Vancouver is the 10th place in the country Canadians would consider to be able to afford a home, just behind Calgary and ahead of Victoria.

For ages 45-54, Vancouver tied with Ottawa and London for second place, and it tied again with St. Johns, Windsor, Edmonton, and Oshawa for ages 65 and over.

Interestingly, Canadians living on the West Coast are more likely to move to buy a place, with about 60% indicating they would make the change. West Coasters are most likely to be open to moving to Kelowna (20%), followed by Calgary and Victoria (both 13%) and Vancouver (12%).

According to analysts, the number of Canadians willing to relocate to achieve homeownership is significantly higher among younger generations; approximately 70% of Millennials and 85% of Generation Zers are open to moving to other cities.

“However being willing to move somewhere and actually doing it are two different things. Those looking to buy outside of their city of residence need to consider house prices, their earning potential and the overall cost of living,” said Angus Kidman with Finder.

“Just because a city is popular doesn’t necessarily mean it’s a great place to live. To avoid moving somewhere you’ll regret, consider renting beforehand to see if the areas you like are affordable and if it’s a good lifestyle fit for you.”

Across the country, 54% of Canadians would consider moving to be able to afford a home, and during the upcoming federal election, younger Canadians are most likely to vote based on party policies based on housing affordability.

Where Canadians are willing to move to buy a home 2019