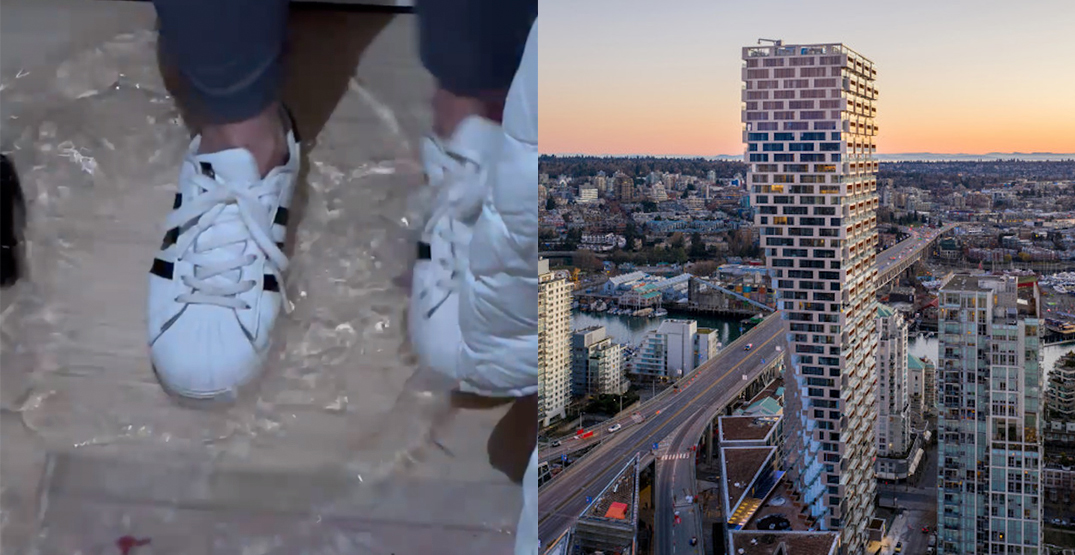 Flooding at Vancouver House on April 15, 2021 (left) and the exterior of the tower (right). (Submitted)

Residents at the 49-storey landmark Vancouver House tower in downtown Vancouver found themselves walking around in their home in up to an inch of water on Thursday night.

Video footage and photos shared with Daily Hive Urbanized show a severe failure of the building’s water systems, causing a deluge of water to pour out of pipes, into the condominiums, and out of the elevators.

One video even showed a waterfall-like stream cascading down the steps of the tower’s emergency staircase.

Multiple residents and realtors confirmed to Daily Hive Urbanized the unusually severe nature of this incident; the water damage on the one-year-old luxury tower is described to be very significant.

The flood began on the 29th floor, and at least nine floors below also suffered varying degrees of damage, according to sources. Accessibility is currently a major issue, as the elevators are not operational due to water damage.

Video shows flooding into the underground parking levels, over 30 storeys from the flood’s point of origin.

A spokesperson for Westbank told Daily Hive Urbanized they were notified at 8:50 pm of the flood, and had an emergency response team on-site by 9:15 pm to shut off the water.

A preliminary investigation suggests a specific water gasket failed, and this particular gasket is currently being analyzed.

All gaskets of this model in the building will be replaced as a preventative measure, and this work is currently underway.

Residents and realtors have been telling DH there was a major flood at Vancouver House on Thursday night. The damage to the homes was significant. Here are a few videos and photos that were shared with us. pic.twitter.com/dsLhCaR6yu

As of Friday, the developer claims a total of 17 units have been directly impacted. They are working with affected tenants on a case-to-case basis to determine the best course of action, and if relocation is necessary, the developer has offered residents discounted accommodation.

One elevator was made operational the following day after the incident, and the remaining two elevators will come online this week. Restoration work is currently expected to take about a month.

Water damage from leaks have become particularly problematic for strata insurers in recent years. It is a driving factor for a 50% year-over-year increase in Metro Vancouver premiums for this particular housing type. A 2020 strata insurance report by BC Financial Services Authority found that water damage from plumbing leaks and failures accounted for 46% of the total claim costs since 2017, and 56% in 2018. Furthermore, insurers have deemed new buildings as higher risk.

Some residents of Vancouver House also previously took issue with the state of finish of the tower in October 2020, at which point many residents had been living in the building for months.

A “brochure” made by a frustrated resident, documenting the condition of the building as of last fall, was shared with Daily Hive Urbanized today. It highlighted alleged inconsistencies with the final product compared to the marketing materials, alleged building design and system deficiencies, and alleged damage from contractors moving equipment and materials in and out of the building for construction during the occupancy period.

Editor’s note: This article was edited to include additional statements from Westbank.