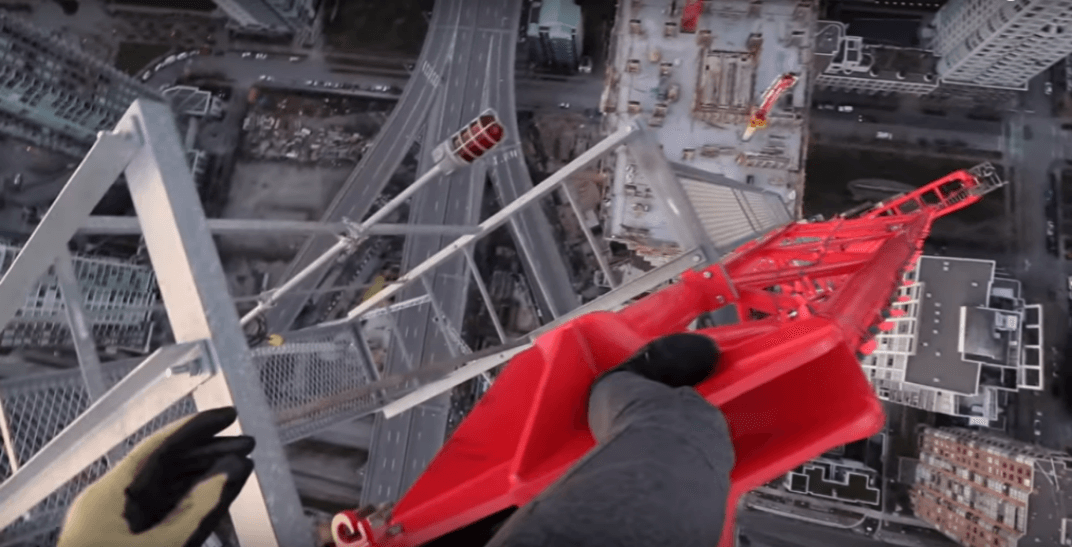 Top of the crane at the Vancouver House construction site. (YouTube screenshot)

People seem to be making a habit of climbing tall things in Vancouver.

A video circulating on social media this week shows an individual climbing the current tallest crane in Vancouver, located on the construction site of the 492-ft-tall Vancouver House residential tower on the north end of the Granville Street Bridge in downtown.

In the video’s description, the uploader explains that they tried to climb to the top of this crane several months earlier but gave up because of the wind and rain. They also claimed to have received threats from people associated with the construction project on Instagram.

Jill Killeen, a spokesperson for Westbank, the company developing Vancouver House, said that they will be working with police as they attempt to address the incident.

“We will be engaging with the police to determine if there is a course of action that can be taken,” Killeen said. “It is foolhardy, dangerous and it puts lives in danger, first and foremost the person who has attempted to take this on and those that might be on the ground below.”

“So we will be very aggressive in pursuing action, this is certainly not something that we want to see repeated.”

The individual who uploaded the video also has an Instagram account dedicated to their rooftop exploits in cities across the world.

Speaking to Daily Hive, VPD Const. Jason Doucette also echoed Killeen’s warnings and encouraged the public to contact police if they “feel they are witnessing a criminal offence.”

He said individuals caught “rooftopping” could face charges such as break and enter and/or mischief.

In 2015, a video uploaded online showed two people climbing Trump International Hotel & Tower Vancouver. In that instance the developer said they would work with the police but needed the public’s help identifying the individuals.

We have purposely not included the video in this article so as not to encourage others to follow suit, as the activity described above is extremely unsafe as well as illegal.