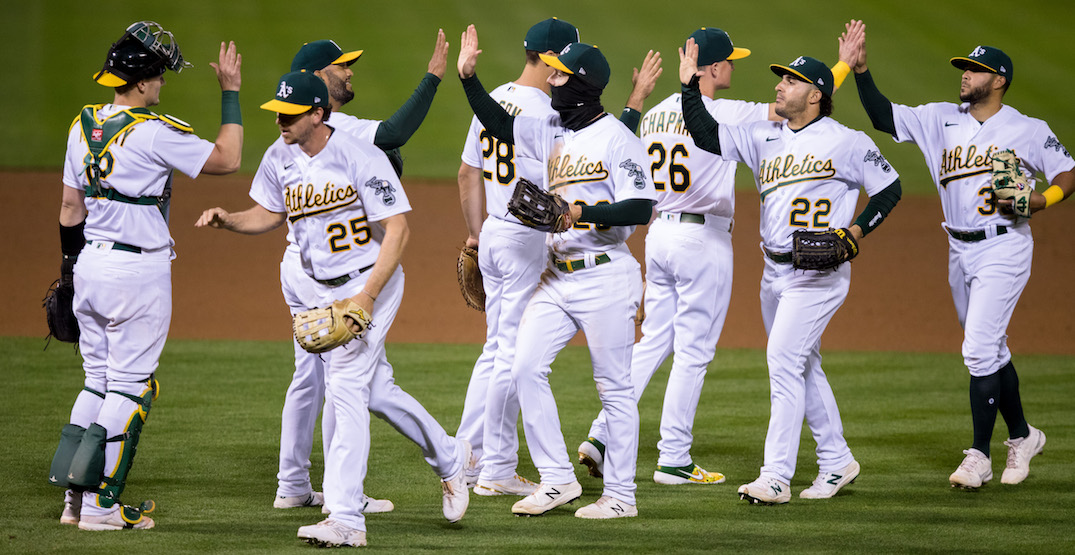 The Oakland Athletics could be on the move, leaving baseball fans in Vancouver dreaming about them moving north.

With efforts to build a new stadium in Oakland proving to be unsuccessful to date, Major League Baseball put out a statement today saying it has “instructed the Athletics to begin to explore other markets while they continue to pursue a waterfront ballpark in Oakland.”

“The Athletics need a new ballpark to remain competitive, so it is now in our best interest to also consider other markets,” MLB announced.

So… how about Vancouver?

ESPN baseball insider Jeff Passan is reporting that the most likely landing spot for the Athletics is Las Vegas, a city that also recently snagged the NFL’s Raiders from Oakland. But Passan also listed five cities that MLB Commissioner Rob Manfred has mentioned as expansion possibilities in the past: Portland, Nashville, Charlotte, Montreal, and yes, Vancouver.

Indeed, it was nearly three years ago that Manfred mentioned Vancouver as a potential expansion city in a television interview at the MLB All-Star Game in Washington.

“We have a real list of cities that I think are not only interested in having baseball, but viable in terms of baseball. Places like Portland, Las Vegas, Charlotte, Nashville in the United States. Certainly Montreal, maybe Vancouver in Canada,” said Manfred.

Certainly, there are a number of challenges that Vancouver would face as a prospective MLB market. To start with, Vancouver needs a billionaire owner to step up and buy the franchise. The Kansas City Royals were sold for $1 billion in 2019, while the New York Mets were purchased for $2.4 billion in November.

The second question is where the team would play. Ideally, Vancouver would have a brand new stadium with a retractable roof located near the water with a view of the North Shore mountains — but someone needs to pay for that.

There would be no shortage of skeptics, but BC Place was originally designed with baseball in mind.

“They weren’t daunted by any changes required to upgrade the stadium to a baseball park as I thought someone might be,” said Bart Given, a former Blue Jays executive who is now the managing director of Torque Strategies in Vancouver, in an interview with Daily Hive last year.

“Whether it’s relocation or expansion, Vancouver is on the radar,” Given added.

So, how ’bout it? Vancouver Athletics does have a nice ring to it…

MLB games in Vancouver? Inject it into my veins https://t.co/Cfin86WqrM

Forget whether or not you'd support an MLB team in Vancouver, ask yourself– Where the heck would they play?

BC Place can be adjusted to accommodate a baseball game but that is by no means a permanent solution. So..?

Sportsnet says the Oakland Athletics MLB team might be on the move. Las Vegas is the favourite for relocation, but look at that, Vancouver is on the shortlist. Vancouver Eh's Baseball? I'd buy a hat.- Jeremy pic.twitter.com/hdiNL7TRYw

I'll get ALL IN on board with a potential Vancouver MLB expansion bid once there's an ownership group with a stadium plan. Until then , its a pipe dream. I would love to get back into baseball , I use to live and die with it.

This is also my chance to reiterate that MLB would be more successful than the NBA in Vancouver. https://t.co/qz0Rk9ymZi

I vote we tear down Guildford Mall in Surrey and put it there (to be clear, I wish to state categorically that my position has absolutely nothing to do with liking to see baseball games in the summer and living walking distance from Guildford). https://t.co/sHT07XnGAI

I have to say I agree. I don’t think MLB would work here, as cool as that would be. https://t.co/q2qfLRzjRj

Here we go boys Vancouver MLB team what you got for us @fr_aquilini https://t.co/H5s0hT5m58

The A's playing home games in a Vancouver waterfront ballpark is definitely something I wouldn't be against seeing. ⚾ https://t.co/utvtzS1yZ4