When The Athletic first reported that team officials from the Arizona Diamondbacks visited BC Place on not one but two occasions, it hardly sent shockwaves through the city of Vancouver.

This isn’t because baseball lacks popularity in the city — look no further than the success of the Short Season Single A Vancouver Canadians and the number of Toronto Blue Jays fans that make the trip down the road to Seattle every year for evidence of that.

Perhaps the idea that an MLB team would choose to play games in Vancouver on a short-term basis seemed too farfetched, because the story was quickly forgotten about.

But perhaps it shouldn’t have been.

The Diamondbacks’ visit was not just for contingency due to concerns with Chase Field’s wonky retractable roof, according to Bart Given, the Managing Director of TORQUE Strategies.

“I can confirm that the Diamondbacks did visit [Vancouver] to look at the city and the stadium,” Given told Daily Hive. “There were a couple of visits to talk about the viability of Vancouver as an emergency spot for them, but naturally there was a broader discussion about the viability of the city long term for Major League Baseball.”

Given is uniquely qualified to speak on this subject, as a former Vice President of Baseball Operations and Assistant General Manager of the Toronto Blue Jays, who now calls Vancouver home. TORQUE Strategies was involved in bringing both Canada Sevens rugby and the 2019 World Junior Hockey Championships to Vancouver in recent years.

The Diamondbacks contend their first visit was merely for short-term contingency planning, while their second trip to Vancouver last August was to see how BC Place hosted a Mumford & Sons concert.

“Shortly after the D-backs received control of their ballpark in 2018, the new financial and operational burdens associated with it motivated the team to explore alternate sites to play temporarily in the event of a catastrophic occurrence associated with the facility,” said Joe Garagiola Jr, Special Assistant to the Diamondbacks President and CEO, in a statement provided to Daily Hive.

“While working at Major League Baseball, I provided the team with numerous possibilities, including Vancouver. Club executives visited there to determine the reality of making it a contingency plan. Subsequently, the team also became the booking agent for non-baseball events at Chase Field, and due to the newly established relationships and respect for their operating standards and reputation, executives made another trip to witness the planning and execution of a concert at BC Place.”

Arizona doesn’t have an attendance problem, with the team averaging 26,364 fans per game last season, placing them 17th out of 30 MLB teams.

But they do have a stadium problem, which has made the Diamondbacks the subject of relocation rumours.

Chase Field is just 22 years old, but there are concerns about its retractable roof, a necessary feature due to the Arizona heat. The roof got stuck halfway open before the Diamondbacks’ home opener last year.

“Any team that has a dome, in particular in a challenging weather atmosphere, should have at least a backup plan,” Diamondbacks President and CEO Derrick Hall told Arizona Sports radio. “I mean, if that [Chase Field] roof won’t close in the middle of summer, we can’t play here. Probably, the union wouldn’t allow it, we wouldn’t allow it.”

The Diamondbacks wanted to break their lease with the Maricopa County, according to Arizona Sports, after the county refused to pay for $187 million in repairs and upgrades to Chase Field. Instead, both parties settled by putting the team in charge of handling stadium operations in May 2018.

“We’re looking at downtown now and eventually we’ll look again around Maricopa County to see what we have to compare it to, but we have no intention of playing anywhere but Arizona,” Hall added.

MLB provided the Diamondbacks with a list of stadiums capable of hosting games in case of an emergency, and Vancouver was on that list.

The Diamondbacks have also reportedly held “secret talks” about relocation to Las Vegas in the past, according to a report by the Las Vegas Review-Journal.

While nothing appears imminent by any means, the situation is at least worth monitoring with regards to Vancouver being viewed as a potential MLB city, by Arizona or anyone else.

This isn’t the first time that Vancouver has been floated as a possible landing spot for an MLB team. In July 2018, MLB Commissioner Rob Manfred mentioned six cities by name in reference to future expansion.

“We have a real list of cities that I think are not only interested in having baseball, but viable in terms of baseball. Places like Portland, Las Vegas, Charlotte, Nashville… Certainly Montreal, maybe Vancouver,” said Manfred, who also mentioned Mexico as a possibility.

The return of an NBA franchise to Vancouver is more talked about among sports fans in town, but MLB appears to be the more realistic option.

“Whether it’s relocation or expansion, Vancouver is on the radar,” Given said, adding that he believes the Diamondbacks’ franchise value would go up if it relocated to Vancouver.

“All things being equal, I think the team would like to stay [in Arizona], but all things aren’t equal. And if it comes down to moving, I would say that Vancouver is the most appealing option.”

No MLB team has relocated since the Montreal Expos moved to Washington in 2004, but there are a few franchises that appear to be in peril — like the Miami Marlins, who averaged 10,016 fans for home games last season, or the Tampa Bay Rays, who convinced just 14,734 fans per game to see them play at Tropicana Field.

Baseball at BC Place 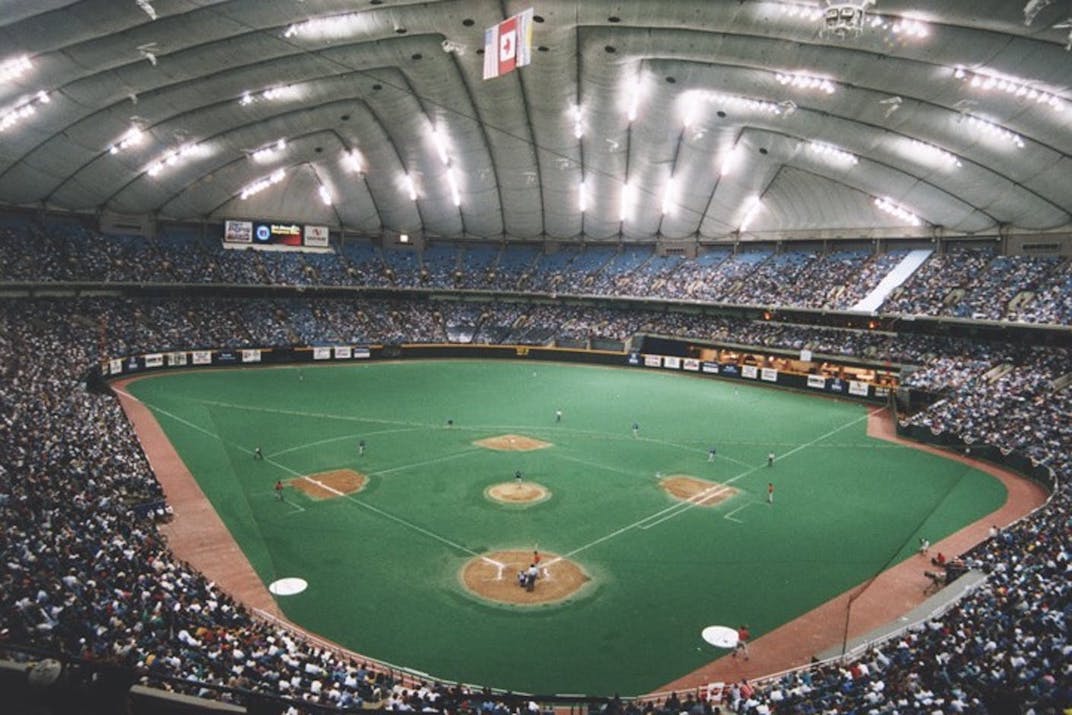 BC Place was built to accommodate baseball (BC Place)

Built in 1983, BC Place was designed with the potential of one day hosting an MLB team in mind.

BC Place even hosted an MLB exhibition series in 1994, with the Toronto Blue Jays, Montreal Expos, Seattle Mariners, and Colorado Rockies taking part. It wasn’t an ideal stadium for baseball — Edgar Martinez famously tore his left hamstring due to “soft infield dirt,” and pop flies were difficult to track against the white inflatable roof.

Despite major renovations that included a new retractable roof being installed in 2011, BC Place is still far from being an ideal MLB venue, but it could be good enough to get the job done.

The Diamondbacks seemed happy enough with it, anyway.

“[Diamondbacks officials] loved [Vancouver] itself. They were wowed by the city,” said Given. “They weren’t daunted by any changes required to upgrade the stadium to a baseball park as I thought someone might be.”

Certainly, having a beautiful modern ballpark with a fully retractable roof like what the Seattle Mariners have would be ideal, though finding someone to spend the money on that in Vancouver is probably unrealistic. Perhaps instead more renovations could be made to BC Place to make it more suitable as an MLB ballpark.

The new scoreboard would need to be raised or moved, for one. Its 54,500-seat capacity would make it the second-largest stadium in Major League Baseball. In other words, it’s too big, but changes could be made to alleviate that problem.

Seats could be removed, while more public and social areas with a view of the field could be installed. It wouldn’t be cheap, but it would be a heck of a lot more cost-effective than building a new stadium from scratch.

The Vancouver Canadians led the Short Season Single-A Northwest League in attendance again last season, drawing 6,210 fans per game in the 6,500-seat Nat Bailey Stadium — which is not far off the Miami Marlins, by the way.

The Blue Jays’ annual visit down the road in Seattle is a unique scene in North America, as Canadians make it feel like a home game for the Jays in an American city more than 3,000 kilometres from Toronto.

And furthermore, there’s data to support the popularity of the sport in Vancouver.

“We did some research with IMI, a globally renowned research company to look at digging a little bit deeper at the viability and the fanbase of baseball in Vancouver,” said Given. “What we found was pretty revealing. Forty-five per cent of the residents in British Columbia already follow Major League Baseball, which is a pretty compelling number when you consider that we don’t have a team.”

TORQUE’s research also shows that 53% of BC residents believe that Vancouver should have an MLB team, and 73% of sports fans would like to see a team in Vancouver.

There are still many hurdles for Vancouver to clear before adding an MLB team, including finding an owner with deep pockets willing to write the cheques. But momentum is building, and certainly it’s not as farfetched as some may have once thought.