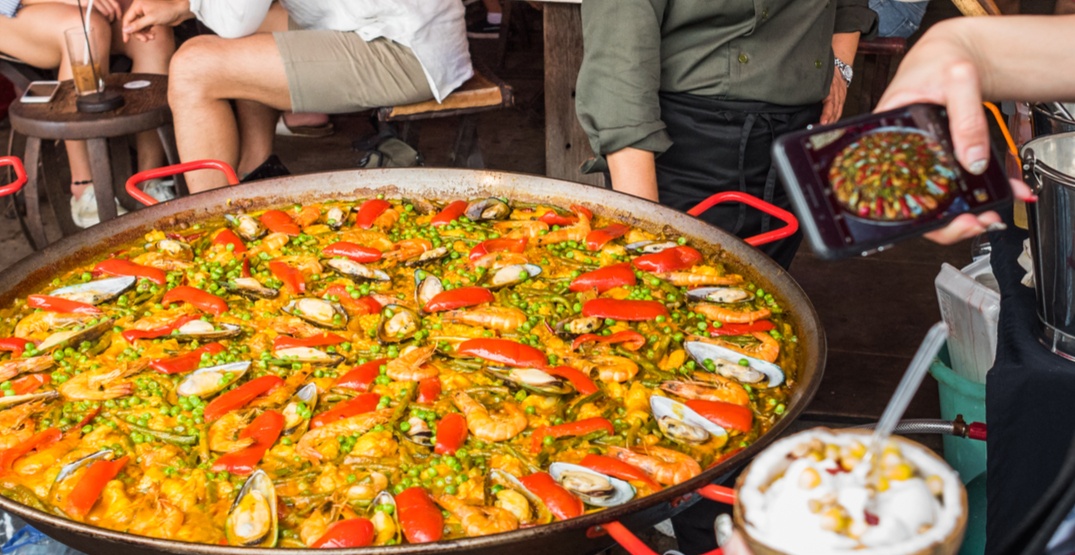 Running from May 11 to October 8, this wildly popular event is gearing up for a 2018 season filled with epic eats and live entertainment. There will be over 100 food vendors and 200 retail stalls this year.

When: Fridays and Saturdays from May 11 to October 8 from 7 pm to midnight; Sundays and holiday Mondays 7 to 11 pm
Where: 8351 River Road, Richmond (nearby Bridgeport Station)
Price: $4.25 (regular admission)

Attendees can expect to chow down on grub from 40+ food trucks in “hot food alley” and enjoy live entertainment all summer long. The Friday Night Market will also feature a 19+ beer garden, serving local craft beer and cider as well as Betty’s Vodka Iced Tea.

When: Every Friday from May 4 to September 28 from 5 to 10 pm
Where: Shipbuilders’ Square – 15 Wallace Mews, North Vancouver
Price: Free

The newest theme is a classic but cheeky one, The Great British Tea Party is available now through September 3, with seatings at 11 am, 1 pm, and 3 pm daily. Selections at this tea include Fairmont’s LOT 35 Tea, the Eton Mess with berries, meringue, and whipped double cream, and raisin and butter scones served with Devonshire cream and strawberry jam to name a few.

Every Sunday this summer Cacao Vancouver will be offering a drool-worthy Latin-style BBQ. This event will run from June 10 to August 26 and offers patrons traditional “Carne Asada” from different regions in Central and South America. Come to join the Cacao family for a classic neighbourhood Sunday gathering. Reservations are required.

Experience an epic East Coast-inspired Sunday Seafood Boil without leaving the West Coast at Vancouver’s celebrated Boulevard Kitchen & Oyster Bar. Take a seat on the stunning downtown patio and tuck into a bounty of fresh-caught seafood – jumbo prawns, clams, mussels, crawfish and Dungeness crab –piled high on butcher’s paper and served with all the fixings, including Boulevard’s signature bacon cornbread and sweet Beignets for dessert.

Market by Jean-Georges’ new weekend brunch, Belle Provence, kicks off on June 17 and will run until mid-September. Guests can expect Provençale-inspired dishes on the new brunch menu, including eats like baguette tartines, lavender lemonade popsicles, madeleines, French toast, and of course, rosé.

When: Weekends from June 17 to mid-September
Where: Terrace at Market by Jean-Georges in the Shangri La – 1115 Alberni Street, Vancouver

The team at YEW seafood + bar is celebrating Summer by bringing back the ultra-popular family style- Dungeness Crab and Lobster Boil Dining Series. Guests will tie on a bib (yours to keep) and raise a complimentary glass of wine to begin the evening.

This South Granville gem is offering a special season summer prix fixe for $39. The three-course menu will be available Sunday through Thursday and features dishes such as Sawmill Bay Oysters, Coho Salmon, and Guanaja Chocolate Souffle to name a few.

When: Sundays through Thursdays; Friday and Saturday until 6 pm
Where: 2881 Granville Street, Vancouver
Price: $39

This weekly series that features a savoury dumpling menu, DJ Chris Allen spinning vinyl, and a flashy disco ball setting the mood. Plates are $10 and guests can choose from an assortment of decadent dumplings including nettle and ricotta with wild greens and pork and burdock with charred chilli sauce.

When: Mondays at 8 pm (walk-ins only; reservations on Mondays will only be accepted until 6:30 pm)
Where: 2702 Main Street, Vancouver
Price: $10 dumplings, $6 drinks

Fridays on Front takes place from 5 to 10 pm on the 600-block of Front Street, which is conveniently located just steps away from two Skytrain Stations (New Westminster, Columbia).

Attendees can choose from August 18 or 25 and enjoy slow-smoked brisket and pork shoulder from a 12-foot smoker/barbecue barrel, beer-brined chicken and brats, as well as a choice of sides like Carolina coleslaw and creamy potato salad, to name a few.

The event will see the christening of the eatery’s brand new and gigantic paella pan, which was shipped all the way from the port city in Spain. Attendees can dine in or take it to go if they wish, but either way if you show you’ll be faced with a whole lot of seafood.

The 10th Annual Richmond Garlic Fest will take place August 19. Garlic Fest is The Sharing Farm’s largest fundraiser of the year and supports the farm in its work to provide fresh local produce to low-income families. Expect fresh local garlic, garlicky delights from local chefs, and an expanded Farmers’ Market.

Join the Tacofino family on Sunday, August 19 as the beloved Baja-by-way-of-West-Coast spot marks the 2nd anniversary of its Yaletown location at 1025 Mainland Street with an afternoon Patio Party. From 2 to 6 pm, Tacofino staff will fire up the grill on the deck and serve up celebratory feature tacos al fresco-style while Moody Ales takes over the draught taps and DJ Dana D of Black Hemlock Music takes command of the turntable. The Tacofino outpost will also feature extended Happy Hour food and drink specials from 2 pm until closing including $4 sleeves.

When: Sunday, August 19 from 2 to 6 pm
Where: Tacofino Yaletown – 1025 Mainland Street, Vancouver

To celebrate their milestone fifth year, Mamie Taylor’s is inviting all their guests, past and present, to join them for a down-home style Mamie’s summer anniversary party on Sunday, August 19 from 3 to 10 pm. There will be specially-priced Margaritas, pints of Strangefellows Talisman, and snacks.

This Southern BBQ with Merchants Workshop and DL Chicken Shack is brought to us from Fraser Common Farm Co-op.

This August, RibFest Langley looks to take a bite out of Metro Vancouver’s barbecue scene by hosting top ‘ribbers’ from Prairie Smoke, Boss Hogs and more. The event is free and open to families of all ages. There will also be live music and family entertainment throughout the day.