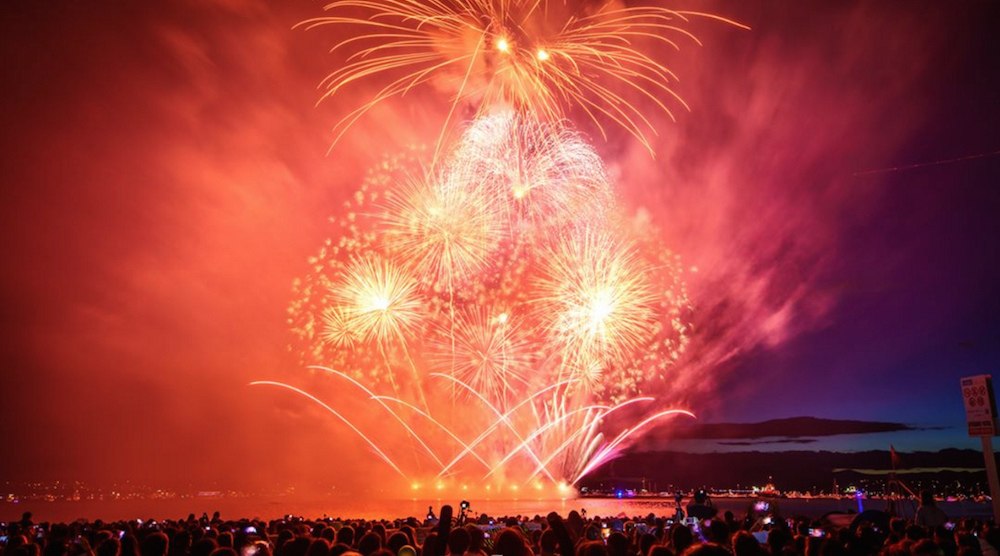 A blaze of fireworks will shower over English Bay in downtown Vancouver this summer over a trio of nights for the 2017 Honda Celebration of Light fireworks competition.

“The Honda Celebration of Light sparks togetherness and celebrates the spirit of our city as Vancouver’s premier event,” said Paul Tilbury, Co-Chair of the Vancouver Fireworks Festival Society.

This year’s competitors include the return of Japan’s AKARIYA Fireworks, which took the winning title at the 2014 festival. Founded just three years ago, it has participated in 57 fireworks competitions such as the Calgary International Fireworks Festival in 2014 and the Philippine International Pyromusical Competition in 2015.

And to properly celebrate the 150th anniversary of Canadian confederation, there will be a Canadian team in contention at this year’s festival, represented by Royal Pyrotechnie from Montreal. The Quebec-based team stages over 300 shows per year and won its hometown fireworks competition, L’International des Feux Loto-Québec, over three separate occasions.

To celebrate Canada’s 150th birthday, all three fireworks teams are required to include an “iconic” Canadian song in their musical soundtrack that will be synchronized to their fireworks show.

The chosen Canadian song will be determined through a public vote on the Honda Celebration of Light’s Facebook page, with voting take place between March 7 and April 2.

The Canadian song options are the following:

How to see the fireworks

Each fireworks show will be extended by three minutes to accommodate the Canadian song element of the competition, increasing the nightly show duration from 25 minutes to 28 minutes.

Fireworks will be launched from a barge anchored in the middle of English Bay, providing close-up views of the pyromusical from the shorelines at English Bay Beach, Sunset Beach, Stanley Park Seawall, Kitsilano Beach, and Vanier Park.

For those looking for a more comfortable and posh viewing experience of the fireworks, tickets will be available starting at noon today for the Keg Lounge on the rooftop of the English Bay bathhouse roof, Inukshuk Lounge at the tip of the English Bay peninsula, and the beach hillside YVR Observation Deck.

Although a spot at a downtown Vancouver beach provides the best views, the fireworks are also visible from Vanier Park, Kitsilano Beach, Jericho Beach, and Spanish Banks.

A live radio simulcast of the synchronized music will be played on radio station LG 104.3 FM.

The pre-fireworks concert series on two beach stages will also be making a return this year, with a lineup that focuses on celebrating Canada’s musical talent as part of Canada 150. A nightly food truck festival with dozens of food trucks is planned as well.

Disney’s show, held over a long-weekend, was such a popular draw that beaches filled up hours earlier than normal. It even forced police to shut down access to English Bay Beach, which was a first in the festival’s history.

In an interview with Daily Hive last year, Brad Cicotti, the principal fireworks designer for Walt Disney World Resort in Florida, expressed deep interest in returning to Vancouver for another show.

Organizers say the Honda Celebration of Light generates about $40 million for the local economy annually through increased tourism and spending on local businesses.