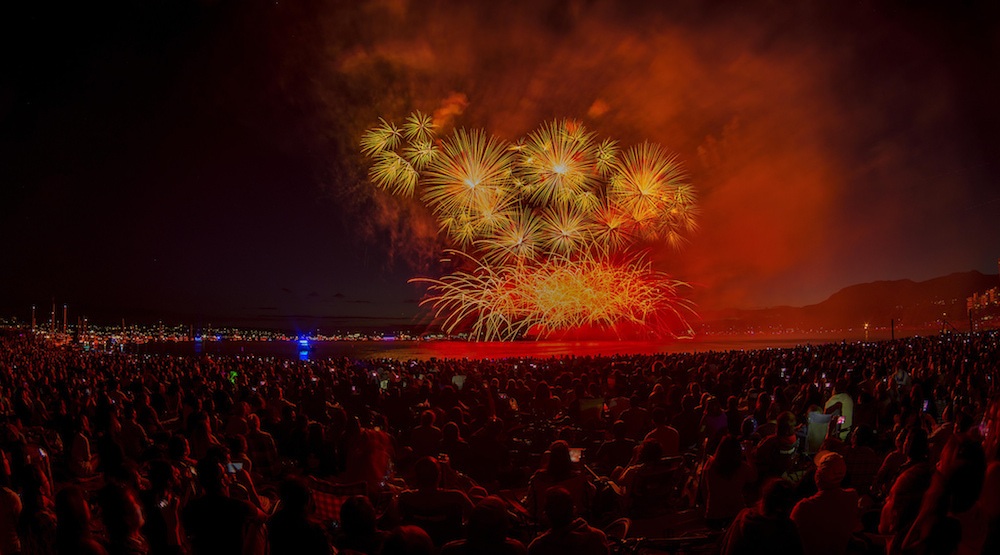 Vancouverites might not have to wait too long to see another fireworks show produced by the company that has Mickey Mouse as its mascot.

The Walt Disney Company, the winning team for the 26th annual Honda Celebration of Light, wants to make a return appearance in Vancouver given the exceptional experience it had here. It represented the United States of America during its show on Saturday, July 30.

“I would definitely love to return to Vancouver for another show,” Brad Cicotti, the principal fireworks designer for Walt Disney Entertainment in Florida, specifically the theme parks at Walt Disney World Resort, told Daily Hive.

“I know teams who do competitions and then, after their first time, they go back there three or four times over a course of 10 or 15 years and they always do something different. They learn from the first time, and we learned a lot on Saturday night and will be bringing our learnings to the next one.”

Cicotti considered competing in Ottawa’s Sound Of Light fireworks festival, which begins next week, but he turned it down in favour of the Vancouver event after several people who competed at the Celebration of Light strongly advised the West Coast show.

Relive the entire 25-minute Disney show at the 2016 Honda Celebration of Light:

After putting on Disney’s first ever fireworks show in Vancouver, he says there are some specific reasons he would make a return appearance to the Celebration of Light, relating to the venue and meticulous level of local organization.

“I love doing water shows because you can be more creative and not have to worry about fallout… things coming down and hitting the water and being safe,” Cicotti said.

An estimated 600,000 people crowded the beaches and parks in and around English Bay to watch the show, making it a single-night attendance record for the annual event. Cicotti’s crew does nightly shows every night of the year at three Disney theme parks in Florida, but several members have never experienced the surreal atmosphere they saw in English Bay.

“I think with the amount of people that came out on Saturday, I think it’s a testament to what you guys do to how you put it on,” he said. “You can tell the event is definitely a big part of the community.”

He also noted that English Bay was an ideal venue for viewing. A day before the competition, his team walked around the area and discovered that crowds could still see everything even if they are a little off the axis of the barge, which is strategically positioned so that the judging tent at English Bay Beach is the best spot to see the show.

Vancouver’s fireworks festival is organized each year by local event organizer Brand Live, which subcontracts the fireworks logistics and competition management duties to Montreal-based Sirius Pyrotechnics, led by chief fireworks producer Kelly Guille. His team also provides competing teams with the local manpower they need to load, set-up, and clean-up in time for the show.

“The crew talked last night, it was a great experience for them as they don’t do it often,” he said. “We were treated well, everything pretty much went as planned. It was a really good experience that I’m sure we’ll never forget.”

As for his favourite aspect while watching the show from the production area at English Bay Beach, he says it was the ecstatic crowd reactions throughout the 25 minute performance especially when they heard familiar songs such as Frozen‘s “Let It Go” and The Lion King‘s “Circle Of Life”.

“Anytime we do any show, the biggest joy for me is people,” said Cicotti. “When I heard people cheering for a song when it started, that to me is… well, we could have come in last and I would still have been happy. We really do that for the audience.”

The one thing he wished did not happen was the weather that developed into the show. Strong onshore winds midway through the show blew fireworks smoke and even ash towards English Bay Beach, obscuring certain elements of the show. There were no strong winds for the first night when Netherlands’ Royal Fireworks delivered their show, but the air was still and caused the smoke to linger.

However, for Howard’s Fireworks’ Australia night, a light offshore breeze throughout the show provided the minimal lift required to clear most of the smoke away.

“We had a bad wind that night,” he continued. “That’s the only thing we can’t control. We can control almost anything other than the weather.”

“The wind was not in our favour, and that kind of takes away from the colours. You don’t see the colours as well as you would on Australia night, the wind was blowing away.”

Cicotti does not know when his team’s next competition might be, but on average they do one show per year. So far, they have done five competitions over the last five years, with Vancouver now being their sixth.