And while this has long been assumed to apply to the geographical area of a particular property, a new report from Roomvu has revealed new insights into what this can mean for people in multi-unit complexes, such as condo buildings. In particular, the report looked at how much more — or less — someone will pay in in a condo, depending on which floor they are on.

In its report, Roomvu estimated that for just such a building in the heart of downtown Vancouver, one would likely pay almost 2.7 times more for a unit on the 10th floor, as they would for a unit on the first floor.

Roomvu said this data “confirms the suspicion” that the higher the floor, the more expensive the price tag. However, not all condo locations are created equal, and the report noted that the price per square foot per floor-level is especially greater in neighbourhoods where there are more high-rises and better views of the city or water. 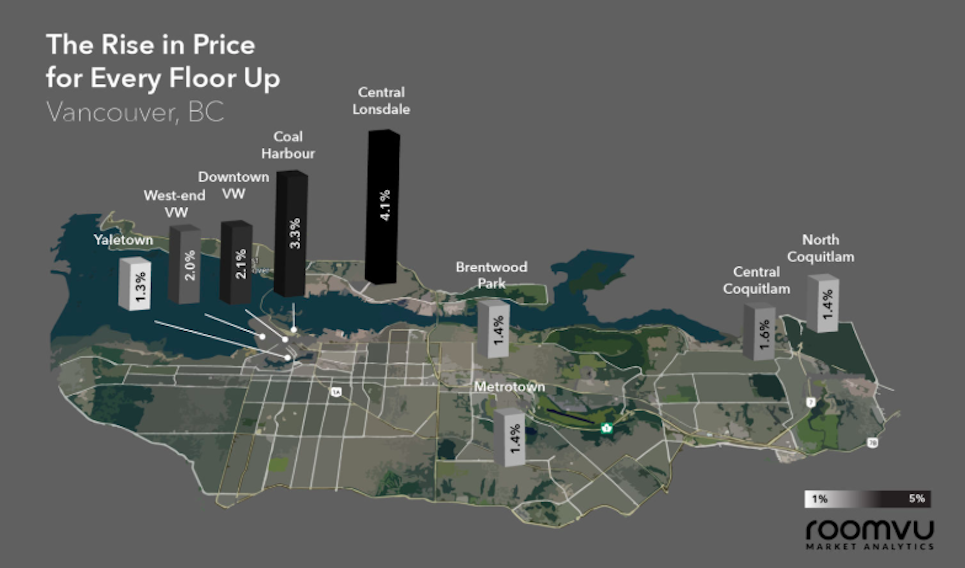 Overall, the report found that living mid-level (floors 1-25) is the best price at about $7 per square foot with only a 0.7% increase from floor-to-floor in the greater Vancouver area.

Those living on higher levels, (35+) will pay more at $47 per square foot with an approximate 2.3% increase.

The report also provided a neighbourhood-specific breakdown of some of the condo-dense neighbourhoods in the city.

In Coal Harbour, the starting price per square foot is already high for the first 1-25 floors starting at $1,000-1,300/sq. ft., the report said. Coal Harbour also jumps significantly in price from the 30th floor onward increasing at approximately 3.3% each floor level up.

Yaletown’s prices generally start at around $900-$1,100 per square foot for the first 25 floors. However, unlike Coal Harbour and Downtown which show a significant rise in price after the 30th floor, Yaletown does not show a significant price increase until the 40th floor. Here, prices generally increase at 1.3% per square foot, per floor-level up.

Prices generally start at $700-$1,000/sq. ft. for the first 1-25 floors. But unlike Coal Harbour, Downtown Vancouver, and Yaletown, West-End Vancouver does not seem to skyrocket in price after the 25th floor. However, it does increase in price at 2% per square foot for every floor-level up.