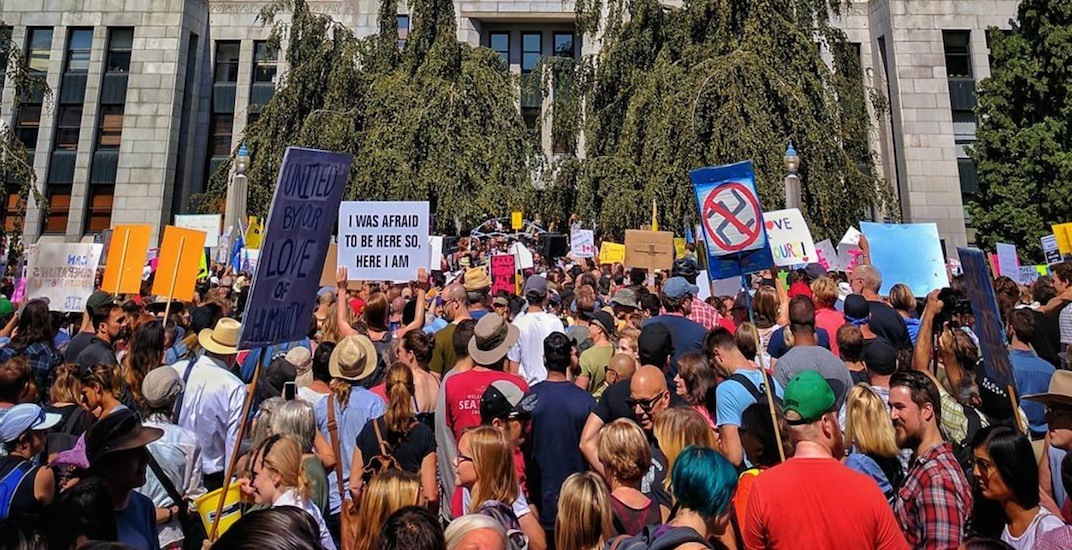 The counter rally against racism by Stand Up to Racism Metro Vancouver at Vancouver City Hall on August 19, 2017. (Kevin Schwantje / Instagram)

Far-right and anti-Islam marchers were completely overwhelmed by protesters who supported tolerance and diversity at yesterday’s rallies at Vancouver City Hall.

It seems that only a few people participated in the march organized by Worldwide Coalition Against Islam and the Cultural Action Party.

According to the Vancouver Police, over 4,000 protesters were in the crowd as part of the counter rally by Stand Up to Racism Metro Vancouver during the peak of the event at approximately 2 pm.

In fact, the crowd was so large it spilled beyond the confines of the City Hall block and into the roadway of West 12th Avenue.

This is my new favourite picture of Vancouver. pic.twitter.com/LC7AnJG9RP

As a safety and security measure, a decision was made to close West 12th Avenue between Main Street and Cambie Street to traffic. Prior to the event, parking restrictions in the area were also made to deal with the expected crowds.

The VPD says the protest was “largely peaceful” with minimal damage to public property, no injuries or reported assaults, and only five arrests for Breach of Peace. As well, two people were escorted out of the rally to prevent a disturbance.

Mayor Gregor Robertson, who denounced the far-right protesters and encouraged people to attend the counter rally, was present and spoke to the crowds.

Heartfelt thanks to the thousands of Vancouverites who rallied against racism and hate today. Great to see so much love, empathy + respect pic.twitter.com/6Ujnc1kemg

He said the City of Vancouver will not accept the hateful, intolerant and divisive message the far-right movement attempted to achieve with their event.

“There’s more to do, we’re not done… There are some among us here today who have not learned the message of peace, respect and understanding, of loving one another regardless of what we believe in, who we love, what we look like or where we came from,” Robertson told the crowds.

“There’s lots of problems around the world… We’ve got to take care of home base and make sure we’re the beacon of that positive love and respect.”

But he pleaded for participants to engage far-right protesters in a peaceful way.

The high turnout in Vancouver against the far-right movement was lauded by Prime Minister Justin Trudeau, who wrote in a tweet: “Way to go, Vancouver! Diversity will always be our strength.”

Way to go, Vancouver. Diversity will always be our strength. 🇨🇦https://t.co/gqijqVF3aY

The municipal government says it does not issue permits for any rallies or protests, and that the Canadian Charter of Rights and Freedoms stipulates the City cannot prevent people from assembling on public property for the purpose of exercising their right of freedom of expression.

However, there are limitations on free speech, such as the act of making statements in public that incite hatred against any identifiable group, which is an offence under the Criminal Code.