A special Vancouver City Council meeting will be held virtually on Monday morning to grant the municipal government with expanded emergency powers that include the ability to enforce orders on businesses.

All restaurant table service operations, including patios, and personal services have already been ordered to close down as a health precaution against the COVID-19 coronavirus pandemic. Restaurants can only provide takeout and delivery services.

All businesses allowed to remain open are required to provide the necessary social distancing for their staff and customers.

“The actions we take today and over the next few days could mean the difference between life and death for many of our neighbours,” said Mayor Kennedy Stewart. “When this is all over, will you honestly be able to look at yourself in the mirror and honestly tell yourself you did everything you could to help? Right now for too many people, the answer is no.”

Over the weekend, inspectors with the municipal government monitored restaurants and their compliance with the order to restrict service to take-out and delivery. Of the roughly 600 establishments visited, a total of 13 orders to non-compliant operators have been issued.

If approved, one of the new measures of the enhanced bylaw will allow the city to issue non-compliant businesses with fines of up to $50,000 and an order for a forced closure. The fines for businesses is scalable from small restaurants with a handful of people violating social distancing to nightclubs with hundreds of people. 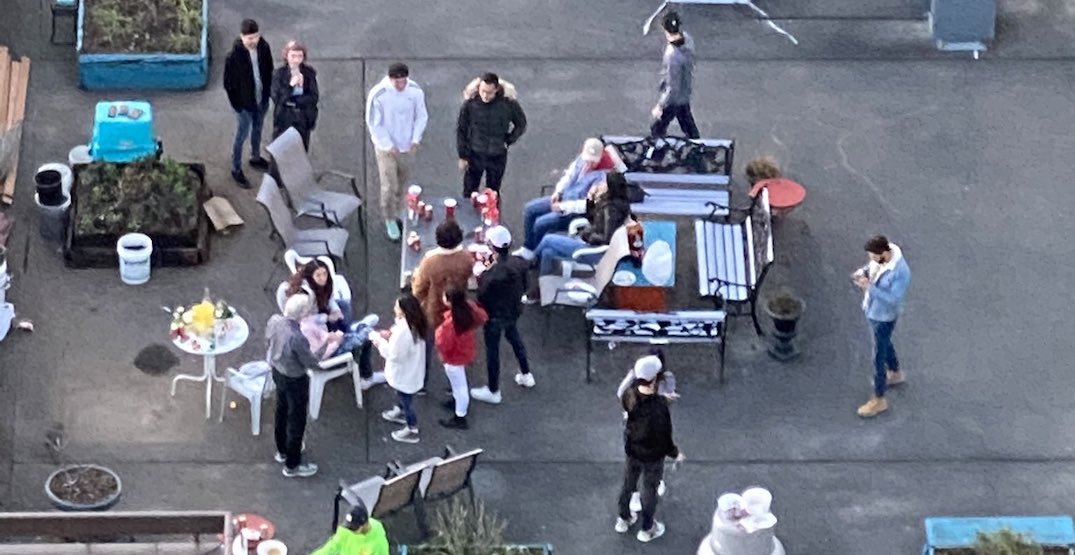 A game of beer pong spotted on a rooftop in downtown Vancouver on Saturday, March 21, 2020. (Farhan Mohamed / Daily Hive)

However, there are no plans yet to issue fines and penalties to residents and groups, despite scenes over the last few days of crowds densely gathering on the seawall, beaches, and parks — a failure to abide to the government’s calls for social distancing of at least two metres or six feet.

A large social gathering with ping pong on a rooftop in downtown Vancouver was even spotted on Saturday.

While residents can still go outside for physical activity, they are now being asked by the city to do this by themselves or with members of their own household.

Provincial officials have currently limited gatherings to no more than 50 people, with the public encouraged to remain at home as much as possible.

“There’s a lot of stupid behaviour… it can’t continue,” continued Stewart. “While many residents have responsibly kept two metres away from others in public, too many people still think the rules do not apply to them. So we’re done asking nicely.”

“Reckless behaviour like playing beer pong in the middle of a pandemic could lead to people dying.”

Earlier today, the Vancouver Park Board took further measures of closing all sports fields, tennis courts, volleyball courts, skate parks, and parking lots at major beaches and parks. However, the beaches and parks remain open at this time.

As of today, there are 424 confirmed cases of coronavirus in BC, including 10 cases that resulted in death.