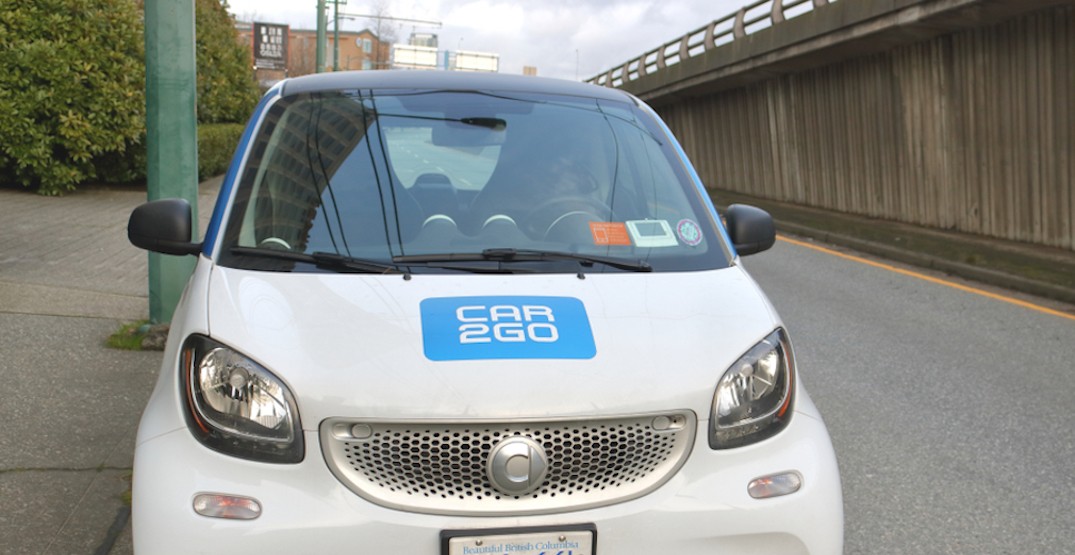 City of Vancouver staff have expressed concern over the potential increase in private car ownership from the impending complete withdrawal of SHARE NOW’s carshare services from the Metro Vancouver market.

A new city staff report, with policy recommendations, indicates the exit of this company, formerly known as car2go, will translate to a reduction of 1,500 carshare vehicles from the region.

This withdrawal represents a tremendous capacity loss of 43%, given that as of six months ago there were 3,500 carshare vehicles in Metro Vancouver, with free-floating carshare services — Car2Go and Evo — accounting for 80% of the region’s entire carshare fleet.

Evo has responded to the withdrawal of its main competitor by announcing that it will add 250 cars to its fleet, but this only recovers a small fraction of the capacity previously held by SHARE NOW.

City staff cite data indicating about 34% of adults in Vancouver have a carshare membership. Furthermore, according to a study, each carshare vehicle replaces two to nine private vehicles and allows households to reduce their annual vehicle-related greenhouse gases by up to 15%, on average. And up to seven of the private vehicles replaced are vehicles that people chose not to buy.

“This loss of service has the potential to set back many of the reductions in car dependency that Vancouver has achieved and may make the sustainable transportation and zero emission goals of the City’s Climate Emergency Response more difficult to realize,” reads the city staff report.

“Accordingly, there is a risk that individuals that have foregone purchasing a vehicle may choose to do so if there is a significant drop in the number of car sharing vehicles available.”

Next week, city council will review new proposed policies by city staff that are designed to lower the cost of operating a carshare business in the city, while also making it easier for customers to use the service.

The major change would allow carshare vehicles to have a 35% discount for the time they are parked at meters that falls within the posted time limit. This policy will remain in place until the end of 2020, when staff will review its effectiveness and impact.

It follows the series of policy changes made in July 2019, allowing free-floating carshare services to end their trips in metered parking spaces, which are generally commercial areas, with free stopovers at metered spaces for up to a maximum of two hours when they are actively rented. City staff note that only Evo took advantage of this offer, resulting in a 23% increase in the number of total trips in the fourth quarter of 2019 compared to the same period in 2018.

“When this service is used, car sharing organizations are required to pay the full cost for metered parking. These costs have been identified as a strain on the organizations’ business models,” continues the report.

When coupled with the reduction of the carshare fleet from SHARE NOW’s exit, another $100,000 in meter revenue will be lost this year.

Additionally, there will be a further loss of about $150,000 from the lower-than-forecasted volume in carshare vehicles parking at meters.

When proposed policy and market condition changes are combined, the municipal government could see a net reduction in revenue by approximately $450,000, which will come from the city’s 2020 operating budget.

The last day of service for SHARE NOW in Metro Vancouver has been scheduled for February 29, 2020.

On this same day, SHARE NOW will also cease operating in all of its other North American markets, including Seattle, Montreal, New York City, and Washington DC. Service will also stop in the select European markets of London, Brussels, and Florence, reducing SHARE NOW’s global reach to about 18 cities in Europe. The company announced its decision to withdraw from these markets in December 2019, citing rising operating costs and excessive competition.

SHARE NOW, based in Berlin, was formed in early 2018 when car2go merged with BMW’s carshare service, DriveNow.