The hype around Quinn Hughes keeps rolling, and he hasn’t even played an NHL game yet.

Hughes could make his debut tonight against the Los Angeles Kings. While he’s already the most highly-touted defensive prospect in Canucks history, could he end up as the best defenceman the organization has ever seen, when we look back 20 years from now?

While it’s not fair to put that much pressure on Hughes, it’s not like he has a massive list to climb. The Canucks aren’t an organization chock full of talented blueliners throughout their history.

Still, let’s give some love to the best homegrown defencemen in Canucks history. That means the next eight blueliners were all drafted by the Canucks, so you won’t see the likes of Jyrki Lumme or Ed Jovanovski on this list.

The best defenceman in team history that nobody wanted. Dale Tallon was a middling consolation prize after the Canucks lost out on Gilbert Perreault, who became a Hall of Famer with the Buffalo Sabres.

Tallon’s Canucks career only spanned three seasons, but he did carve out a decent NHL career. He put up 56 points as a 19-year-old rookie on the Canucks expansion squad and was a half-point per game from the back end throughout his 10-year NHL career.

Garth Butcher does hold one record among Canucks defencemen, leading all of them in career penalty minutes. With 1,668 career PIMs, Butcher holds a record that might never be reached, the way the game is going today.

Butcher had at least 200 PIMs per season for five straight years while patrolling the Canucks blueline in the 1980s. He was a vaunted leader among his peers and was eventually named captain of the St. Louis Blues towards the end of his career.

Drafted the year before Butcher, Rick Lanz was a completely different defenceman for the Canucks. He wasn’t a physical force like Butcher, but Lanz had some sweet hands. Injuries hampered large chunks of his career, but he enjoyed three seasons with Vancouver in the mid-1980s where averaged more than 50 points per season.

One of the Canucks best late-round success stories from the draft, Doug Lidster enjoyed a prolific college career before suiting up in 666 games for the Canucks. He carried over his offensive ability from college to the NHL, surpassing the 20 point mark in Vancouver for nine straight seasons.

Of course, Lidster was infamously traded to the Rangers prior to the 1993-94 season. He won the Cup but was used sparingly throughout the season until the playoffs came. Lidster’s quote in 2010 regarding that series give an intriguing glimpse into his mindset.

“Once we won (the Stanley Cup) and we were shaking hands, I realized that I knew the Canuck players, better than I knew my own teammates.” 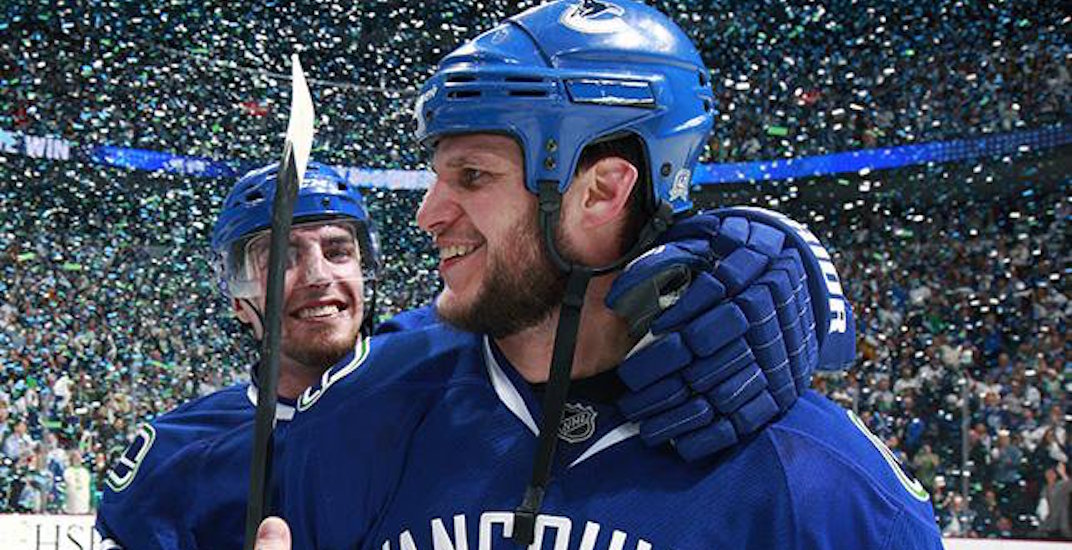 The Canucks modern-day Garth Butcher with an offensive punch, Bieksa fought his way to the NHL through Bowling Green University and the Manitoba Moose.

Bieksa brought a refreshing mix of physicality, skating and offensive instincts to his game. There’s an argument to be made that the pairing of Dan Hamhuis and Bieksa in their prime was one of the best in Canucks history. Not to mention, his tally to send the Canucks to the Stanley Cup final was arguably the most important goal from a Canucks blueliner ever.

The man with arguably the best mustache in Canucks history (sorry, Jack McIlharty & Dave Babych), Harold Snepsts was one of those beloved leaders on the Canucks. A tough customer and stalwart on defence, Snepsts spent twelve of his 17 NHL seasons in the Canucks organization.

Alex Edler recently passed Snepsts for most games played by a defenceman in Canucks history, and he also holds the franchise record among blueliners for goals and points as well. While many discredit Edler for never hitting his supposed peak, the former third-round pick has easily been one of the best defencemen in team history.

Most expect Edler to sign at least a three-year deal in the offseason. Although his health has been an issue, he would have a shot at becoming the first Canucks defenceman to play 1,000 games, if that does transpire.

While Edler holds the most noteworthy franchise records, it’s Mattias Ohlund who should be considered the best homegrown defenceman in Canucks history. Ohlund was an absolute rock in his own end, a physical force, and a quiet leader for those early-2000s Canucks teams.

Despite the drama leading up to him becoming a Canuck, Ohlund ended up giving 11 seasons of consistent performances in Vancouver. He was on pace for 30+ points in each of his 11 seasons, and spent all but two years of his NHL career with the Canucks.