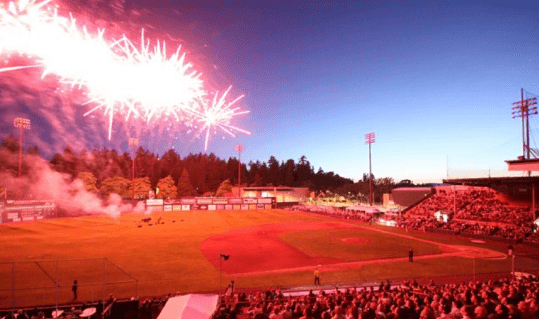 With more than 500 wildfires burning around the province, causing the BC government to declare a provincial state of emergency on Wednesday, the Vancouver Canadians are making the responsible choice.

The Canadians have announced that they have cancelled their popular post-game fireworks show on Saturday.

“The Vancouver Canadians Baseball Club respects the efforts that are taking place throughout the province and within the Pacific Northwest and wouldn’t want to potentially pull any firefighter resources away from their important work protecting our local communities,” said Canadians general manager JC Fraser.

“Our fans understand that above and beyond a great night at the ballpark, our commitment has to remain to our community as a whole and this was simply the right thing to do.”

The Canadians are having another successful season on and off the field. Currently sitting in a tie for first place in the Northwest League, the C’s are in good shape to potentially repeat as champions this season. They’ve been a smash-hit at the box office too, selling out games with regularity.

The Canadians are currently in the middle of a six-game homestand at Nat Bailey Stadium, with tickets to their next three games already sold out.

Beautiful summer weather helps draw people to the ballpark, but the Canadians have also been helped by promotions like post-game fireworks. Saturday’s show was to be the seventh of eight “fireworks extravaganzas” this summer. The next one is scheduled for August 25.