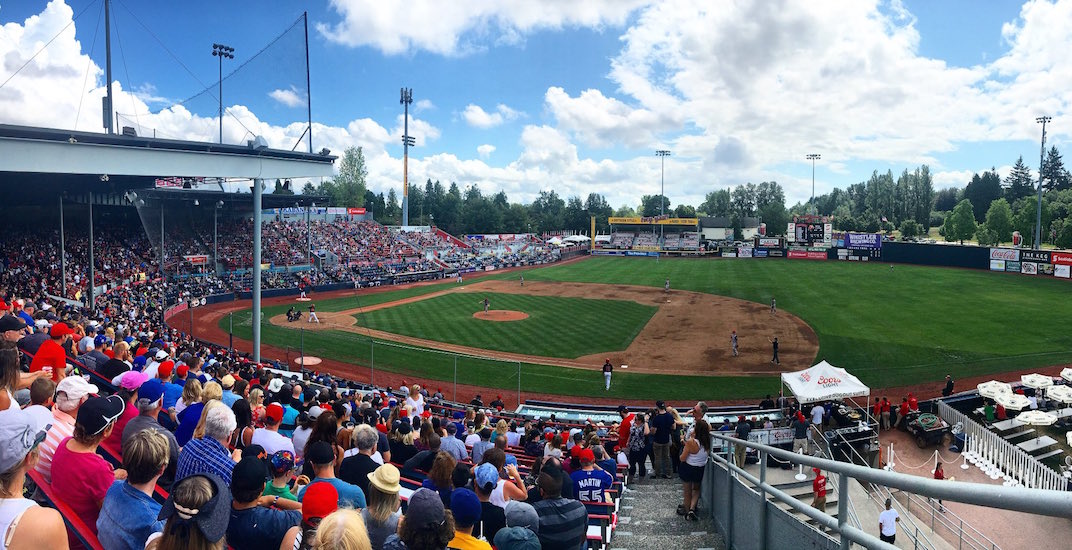 “The good news is, there’s not a whole lot new at Nat Bailey.”

Those are the words of Jake Kerr, part-owner of the Vancouver Canadians since 2007.

Not exactly the best way to sell a professional baseball team, except it is when it comes to the Canadians.

The city has a love affair with its minor league baseball team, even if most people don’t know who’s playing. Does it matter when the sun is shining with a beer and hot dog in hand?

That’s the business model that’s working for the C’s these days, as they open another season at Nat Bailey Stadium on Wednesday. Opening Day is sold out, as usual.

It’s easy to forget, but baseball in Vancouver wasn’t always this popular. The city lost its Triple-A team of 22 seasons in 1999, as the franchise moved to Sacramento.

The Canadians were reborn the next year, but as a short-season Single-A team. Instead of watching players on the cusp of the Major Leagues at Nat Bailey, fans instead got to watch younger players that were at least a couple of years away from reaching their potential.

Prior to the arrival of Kerr and his business partner Jeff Mooney, the C’s drew just 3,260 per home game in 2006. Last year, they set an attendance record, attracting 239,527 fans to the ballpark, which translates to 98.3% capacity.

“I bought it on a complete whim,” Kerr told Daily Hive. “I was a baseball fan at Nat Bailey when I was a little kid, and I heard it was for sale. I’m usually pretty analytical in business and I was not at all analytical about this. I just decided that was something that I really wanted to do.”

The first season did not go well.

“It was a disaster. Between Mooney and I, we made every mistake in the world that first year. We lost more money than you can shake a stick at.”

Kerr credits Andy Dunn, partner and president of the team, with turning things around.

The biggest key for the ownership group was realizing that despite people enjoying the ballpark, they didn’t care all that much about the game being played on the field.

“A couple of things came out when we first bought the team. We did some exit interviews, saying ‘what did you think of the game’ and ‘did you have a good experience?’ We found out that 60% of the people, even back in the beginning, didn’t know who won the game when they left.

Sushi races, the dancing grounds crew, and Instagramable three-foot-long hot dogs are a bigger reason why the Canadians fill the stands every summer than the four championships they’ve won in the last seven years since becoming an affiliate of the Toronto Blue Jays. Hard to believe, but it’s true.

The hashtag #AtTheNat fills up Vancouverites’ Instagram feeds on the regular, providing the best kind of marketing they could hope for.

“Most of our communications are by social media and it works like a hot damn,” said Kerr, who admittedly isn’t the most social media savvy guy in the world. That hasn’t stopped the team from becoming the “No. 1 team on Instagram by a mile” according to Kerr.

“The key for us, is we hired some millennials. If you look at our staff, you realize there’s a lot of really young people. One of the things they brought to the game about 10 years ago is let’s start working on social media.”

The Canadians are opening the season with back-to-back fireworks shows on Wednesday and Thursday following the conclusion of their games. They’ve got an expanded craft beer selection this season, and have plans to improve the right-field viewing area after the season.

Given the smash-hit success of the Single-A team, doesn’t a return to Triple-A one day make sense?

Not so, says Kerr.

“As a baseball fan I’d certainly like to do that. But we’ve analyzed it very carefully,” he says.

The Canadians begin their season at the end of June and finish at the start of September. In other words, they play all of their games during times when Vancouverites want nothing better than to be outside.

The Triple-A schedule is not as kind.

“For all these Triple-A fans, if they’ll guarantee me that they’ll go out there in a rainstorm, or mist and [freezing temperatures], I’m on. But otherwise all that happens is you lose your ass for the first two months and you spend the rest of the summer trying to make it up.”

The Canadians, by the way, have only had four rain outs in the last five years.

Kerr did concede that if a younger man owned the team, Triple-A might be worth a look. Nat Bailey Stadium isn’t big by PCL standards, but that shouldn’t disqualify it according to the C’s owner. Triple-A stadiums are bigger, but that doesn’t matter if they don’t sell out like Nat Bailey.

For now, if it ain’t broke, why fix it? The city loves coming to the ballpark, no matter who’s on the field.

“We’d rather come with a really good entertainment package that the fans really seem to like.”

Hard to argue with that.