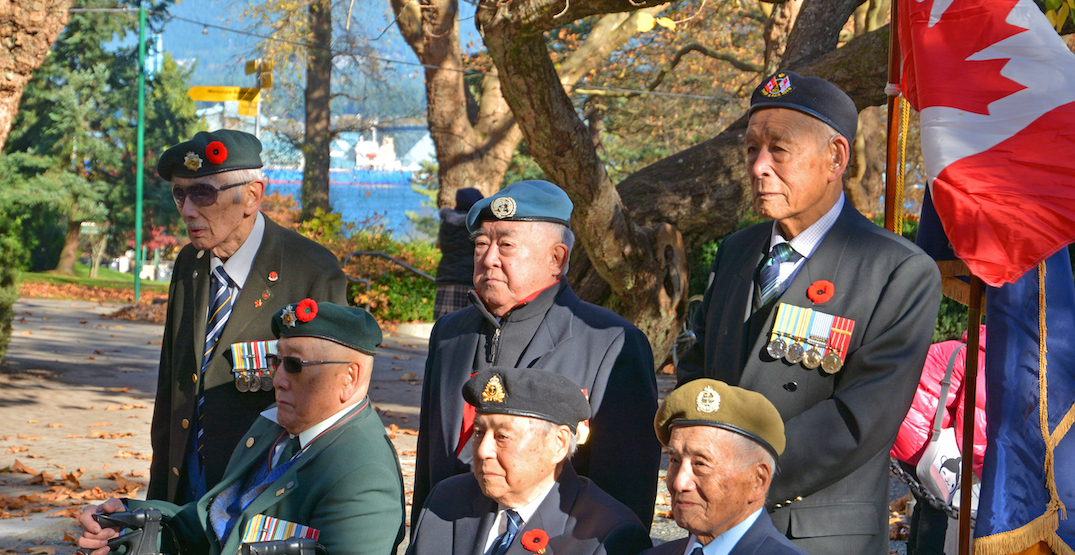 The veterans group responsible for issuing all special BC license plates for veterans on behalf of the provincial government is up in arms over City of Vancouver staff’s recommendation to city council to reject offering any free parking to veterans, including rescinding the existing provisions that permit free parking over the week-long period leading up to Remembrance Day each year.

In November 2019, city staff were directed by a city council motion to explore options to expand the free parking privileges to veterans year-round.

But city staff, in their report ahead of Thursday’s public meeting, urged city council to oppose existing and proposed regulations over their concerns that it contradicts the municipal government’s directions of discouraging car use and advancing “equity,” and could significantly impact city finances as a result of the reduction in parking revenue.

“It does not support veterans who travel in other ways, such as by transit, walking, or cycling,” reads the city staff report.

“Veterans are not, in general, a low-income or disadvantaged group, so this does not advance key equity goals and not charging for parking would not support low-income veterans, many of whom may not be able to afford a vehicle. Depending on the direction given by Council, it may also be costly and reduce City revenues.”

In response, the volunteer-based licensing organization, British Columbia Veterans Commemorative Association (BCVCA), has issued a written response stating city staff did not consult with their group, and refuted the assumed rationale in recommending no free veteran parking.

“Veterans are not and never should or will be compared to as a ‘key equity goal’. Veterans sacrificed their families, their homes, their professions and their LIVES in faraway lands, serving in the cause of peace,” reads the response.

“Veterans with great humility, viewed this as their civic duty to community and country and ask for nothing but the common mans’ respect. It is unfortunate, City officials do not understand this distinction upon which such reverence of decision making must be based.”

Furthermore, the act of offering veterans societal benefits such as free parking was never based upon a financial disadvantage.

“The reason for Veteran Free Parking is to honour and pay homage to those selfless individuals who gave of themselves so that future generations could live in a society with freedoms beyond compare throughout the world. Freedoms that are taken for granted because ‘Military’ service is so far removed from the common mans’ thoughts,” continues the response.

“Income disparity is not any criteria in evaluating what is owed to Veterans by a society, especially generations anew. Our societal sacred obligation is to ‘Remember’ these sacrifices and honour with reverence, all that has been handed to us by those whose valour was neither fearful nor wanting.”

City staff also drew concern over whether other groups such as retired firefighters, police officers, frontline healthcare workers, and teachers could ask for free parking benefits in the future. But BCVCA countered that a provincial government survey on public policy found that veterans license plates should not be expanded to other organizations.

“The distinction British Columbians cite in that survey is that ‘Military’ service holds a unique reverence and should be so treated with dignity and respect,” reads the response.

“Firefighter organizations (etc) were all in agreement with this citizenry value. BCVCA, the sole Provincial Authorizing Agent for Veteran Licence Plates, heard from many of these other organizations during the survey, stating that they understood and had no expectation of specialty licence plates. Further that this must be reserved for ‘Military’ Veterans.”

BCVCA also stated the city’s veteran population assumed statistics are “unsubstantiated and inaccurate,” which led to the municipal government’s estimated annual revenue impact of up to $2 million for free parking.

According to the organization, most of the veteran license plates have been approved for veterans living elsewhere in the province — not Vancouver or even Metro Vancouver.

As another factor, most approved veterans license plates are for veterans of the Second World War, Korean War, and Cold War. Many of these veterans have since passed away, and many others are no longer driving due to age and impaired health. Any loss in parking revenue from veterans is likely “minimal.”

Moreover, elderly veterans tend to rely on a car to get around, whether they drive themselves or rely on someone else to operate their vehicle. Veterans often rely on family friends to drive them due to their personal mobility challenges, and they coordinate with other veterans to minimize vehicle needs.

Due to declining health, the city’s suggestion that veterans should cycle or even use public transit as an alternative does not compute.

“The majority of aged Veterans do not cycle. All in all Veterans vehicle transportation is so minimal any effects upon climate change or congested transportation policies are non-existent,” continues the response.

“As well, when Veterans do visit Vancouver from other jurisdictions, it is for the purpose of attending social events, the theatre, civic events, special annual festivities, spending money, which benefits the City of Vancouver. Street space management does not require an instruction booklet. You see a Blue BC Veteran Licence at a meter, walk by it and say ‘Thank You For Your Service'”.

For these reasons, BCVCA also took specific aim at the Vancouver Park Board’s decision to restrict car access into Stanley Park over much of the year.

“As was found with Stanley Park lane closures, people with mobility difficulty have every right to enjoy the City’s green spaces which should not only be catered to the young and fit. Surely the City learned something from this failed experiment,” reads the response.