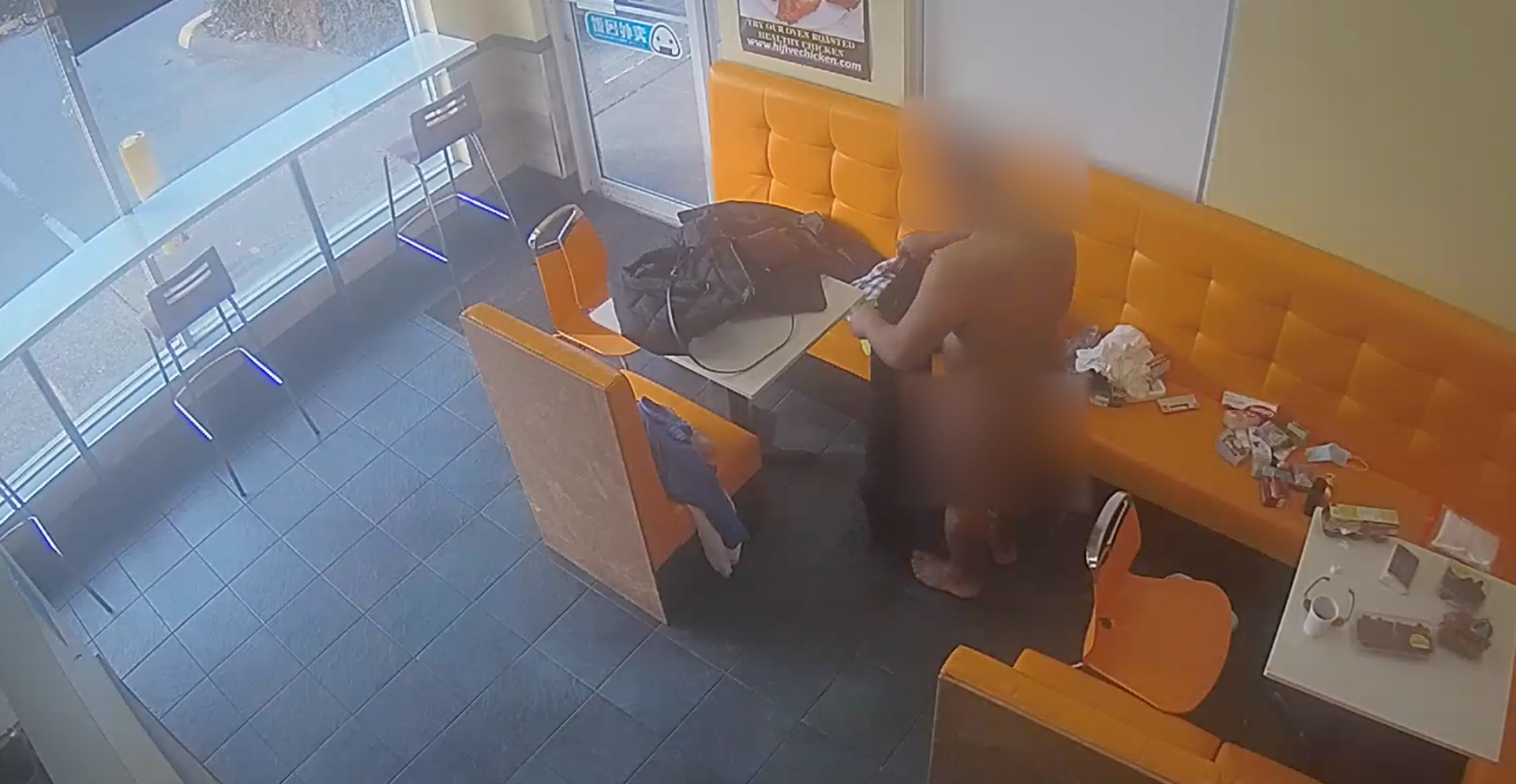 A man changes in a fast food restaurant near Marine Drive and Main. (Submitted)

Some Vancouver business operators say providing resources for homeless individuals has increased during the pandemic, and are questioning why the government has not stepped up to help.

Suraj Sharma, owner of HiFive Chicken on Marine Drive, has been experiencing issues with one particular individual over the last few months. This man often sleeps in the restaurant and on more than one occasion has allegedly acted aggressively towards staff.

He allegedly stole valuables from staff lockers once and another time allegedly hit a young woman who works there.

“These poor guys have a mental health issue. We understand about that one,” Sharma told Daily Hive. “But behaving that way … we are trying to survive ourselves.”

On February 23, the man stripped down and got changed in the restaurant’s dining area, which Sharma said made staff uncomfortable.

“We have part-timer students who are working, 19 to 20-years-old. If he’s doing these activities there, who’s going to work [here]?” Sharma asked.

Sharma has contacted the police about the incidents several times, but the man keeps coming back. Vancouver Police Department spokesperson Tania Visintin told Daily Hive that changing in public could fall under public indecency, but it depends on the situation.

Dealing with these situations is often a “grey area,” she said. Officers will often ask whether the individual is committing a crime or a bylaw offence. Then, they will ask if the person wants to go to a shelter.

If not, then the person can stay.

“It is important to note that homelessness is not a crime,” Visintin said. “The vast majority of homeless people do not cause any problems.”

The restaurant owner questioned why there isn’t a shelter or some other facility where the man can access changing facilities and a washroom instead of seeking those basic necessities at his business.

He believes other businesses in the area and transit drivers are also dealing with the issue. Daily Hive has reached out to Triple O’s, McDonald’s, Wendy’s, and Tim Horton’s for comment.

Resources for homeless individuals in Vancouver that were inadequate to begin with have become even more scarce during the COVID-19 pandemic, according to Union Gospel Mission spokesperson Jeremy Hunka.

“People have fewer places to go,” he said. “A lot of places … shut down or limited how many people they can help because of a need for social distancing.”

But at the same time, the number of people who need help is increasing. People who were on the margins sleeping on couches or staying with friends are finding they’re not able to do that during the pandemic, Hunka said.

At UGM, they’re also seeing an increase in the number of people coming to the shelter and sleeping in parks.

“People struggling with not having access to right supports all of a sudden turn up at individual business looking for the basics like a washroom or place to rest,” Hunka said. “And those businesses aren’t really equipped to deal with some of these really uncomfortable and complicated problems.”

Hunka thinks a combination of more respite spaces, more housing with wraparound supports, and basic things like public washrooms could be a good start to improve the situation.

He spoke to Daily Hive in late January when the manager of JJ Bean at Main and 14th was raising the alarm about increasing conflicts with homeless individuals in the area and local businesses. 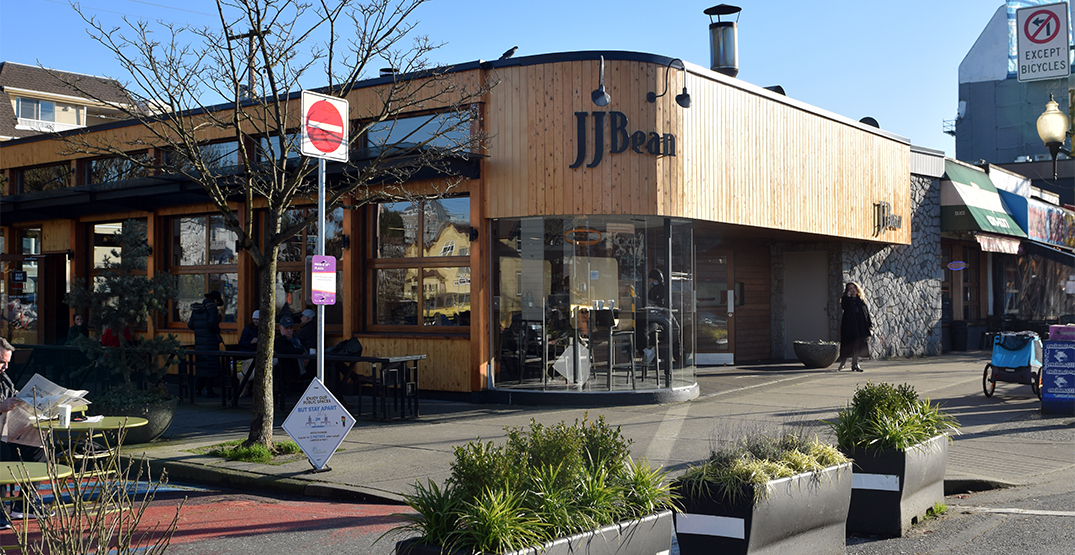 Julian Bentley, who manages the Mount Pleasant cafe, has generally had good relationships with the homeless individuals who stay near the intersection. But this year, a new group of people has moved into the area who are causing problems, he said.

They’ve started coming into the cafe, bothering customers, and will sometimes lock themselves in the bathroom for hours and staff need to clean up the mess. He alleges they’ve tried to steal laptops and other electronics from customers as well.

They’ve been verbally abusive to Bentley, saying they wish he were dead. He also said they’ve been defecating on the property and smearing feces inside and outside the cafe.

In late January, he also said one person placed a burning fire-ready log at the front entrance of the cafe.

“I am really struggling to find the appropriate lever to pull to get help from somebody,” Bentley told Daily Hive.

The consequence is that his cafe staff who are often young and making about $15 per hour are “acting as a first responder when somebody’s overdosed in the bathroom,” Bentley said.

Daily Hive visited the intersection of Main and 14th three times to request comment from the individuals Bentley is referring to, but did not find them.

Bentley doesn’t hold any individual at fault, and understands the people causing him problems are facing a myriad of issues themselves. He also acknowledges there’s a lack of places for them to go.

But at the same time, he needs to provide a safe workplace for his employees and finds he’s having trouble doing that.

“There’s this convenient blind spot that I think nobody wants to deal with, and there’s not a simple solution.”

Hunka agrees, saying failure to deal with homelessness as a region or a province means these problems are often faced by individual people or businesses who don’t have the ability to properly help.

“When we look after our most vulnerable, the business community also benefits,” Hunka said. “Right now, because of COVID-19, it’s on a new level how interconnected we are.”

City of Vancouver spokesperson Ellie Lambert said the City knows the pandemic has had a disproportionate impact on homeless individuals and recognizes an immediate need for more public washroom facilities.

“The closure of public facilities during COVID-19 has led to many people not having safe access to washrooms. This can lead to an increased risk of overdose and violence, as well as a loss of dignity as many people are forced to use alleys and other public and private spaces as washrooms, increasing sanitation concerns,” she said.

She added the City is grateful to businesses that continue to allow homeless individuals to use their washrooms and facilities.

The City is installing two more multi-stall washroom trailers and extending the hours of public washrooms at some other City facilities, she said. Most public washrooms are available in community centres, libraries, and parks. There are also two sets of underground washrooms (one at Main and Hastings and one at Victory Square) and 11 automated public toilets in the downtown area.

There are also micro cleaning grants available for people who will pick up needles and clean up the streets in certain neighbourhoods, Lambert said.