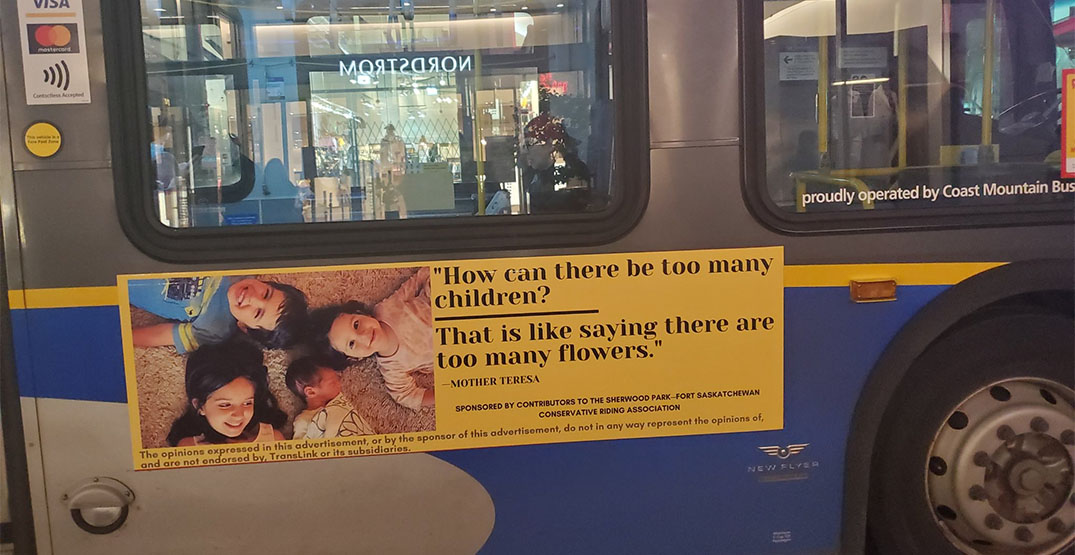 A Liberal MP is accusing the Conservative party of placing anti-choice ads on Vancouver buses, but the Conservative MP who placed them says they’re rebutting other ads about overpopulation.

The banners in question are yellow and feature an image of Conservative MP Garnett Genius’ children with a quote from Mother Teresa saying, “How can there be too many children? That is like saying there are too many flowers.”

Text on the ad indicates it was paid for by the Sherwood Park—Fort Saskatchewan riding association, which is near Edmonton.

Genius said he placed the notices in response to a previous set of ads on Vancouver transit that advocated for people to have fewer children to reduce carbon emissions.

The original ads, from One Planet One Child, encouraged families to only have one baby, saying not having a second is the best gift a parent can give their first-born because it will help ensure the planet stays viable.

Garnett accused the ads of being racist since they featured an image of a Black baby.

Some people posted a racist ad in Vancouver telling everyone to have only 1 or no children. I responded with an ad featuring my children, saying essentially that children are wonderful. @HedyFry complained about the second ad, but not the first. #partisanpolitics #cdnpoli pic.twitter.com/ytysNea0KU

But Vancouver-Centre MP Hedy Fry accused Garnett’s ads of being anti-choice because they deny a woman’s right to choose what happens to her body. She demanded Conservative leader Erin O’Toole remove them immediately while speaking in Parliament via video link this week.

“It is disheartening to see the official opposition actively attempt to limit the reproductive rights of Canadian women,” she said.

The Conservative Party is funding anti-choice advertisements on public transit in Vancouver. @ErinOtoole You claim to have gotten into politics to defend the rights of Canadians. Here’s a great opportunity for you to do that. Take these ads down today. #cdnpoli pic.twitter.com/vohREvkSgQ

Although Garnett’s ads are not specifically anti-abortion, the notion that there’s no such thing as too many children was interpreted that way by Fry and some others who saw the ads.

It’s also not clear why the Alberta MP is so invested in what’s displayed on buses in another province. According to a tweet from Genius, his own ads were “fully crowd-funded.”

A TransLink spokesperson told Daily Hive that they’re bound by the Canadian Charter of Rights and Freedoms to accept these ads because they’re a public body.

“Our policy states that ads which promote specific theology or religious ethic, point of view, policy or action, or conveys information about a political party or candidacy of any person for a political position or public office, must visibly display the name of the sponsoring group,” the spokesperson said.

That information appears on the ad, as well as a disclaimer that the message is not reflective of TransLink’s own views.