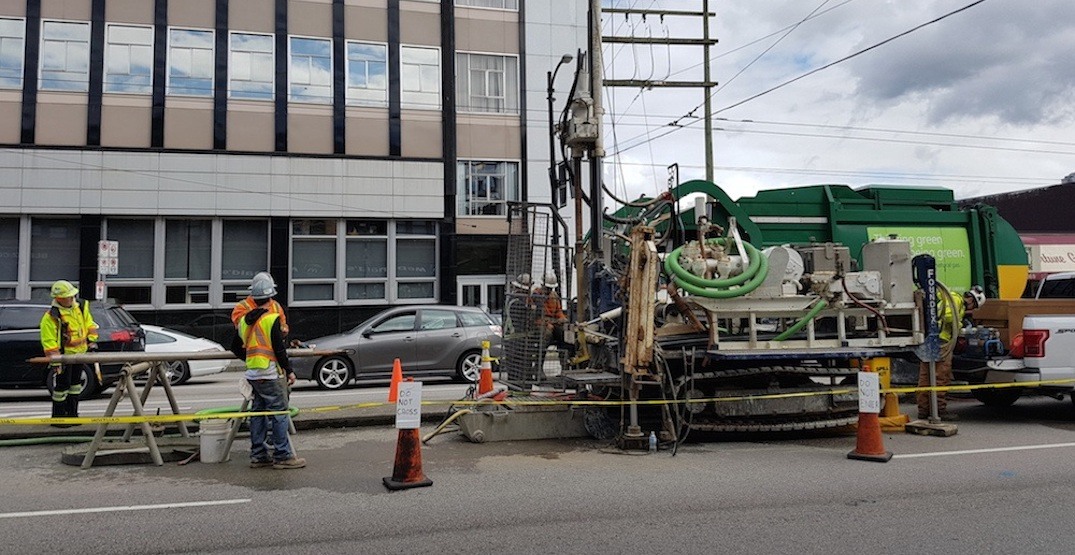 Geotechnical testing for the Broadway Subway at the intersection of Granville Street and West Broadway in 2017. (Kenneth Chan / Daily Hive)

The BC Ministry of Transportation has issued an advisory warning of temporary lane closures and parking restrictions on West Broadway to allow for further geotechnical drilling investigation work.

Soil study work will be used to gather information about the future construction of the $2.8-billion Millennium Line Broadway Extension, which will be a bored tunnel. An underground station in the immediate vicinity of Arbutus Street will be the new western terminus of this SkyTrain line.

This supplements the extensive geotechnical work that was done on the corridor over the last few years.

Drivers and bus passengers travelling through the area should anticipate delays.

Pre-construction work is already well underway on the installation of new overhead trolley wires on sections of Cambie Street, West 12th Avenue, and Macdonald Street to allow for the temporary detours of the No. 14 UBC/Hastings, No. 16 Arbutus/26th Avenue Station, and No. 17 Oak/Downtown trolley routes during the years-long subway construction. The No. 9 and 99 B-Line will remain on Broadway.

While the tunnel will be bored, localized top-down, cut-and-cover street excavation is still required for the construction of the underground stations.

In an earlier bulletin this month, the Ministry says it has begun its process of consulting with the public to create measures that minimize the disruption from construction.

“In mid-August, representatives of the Broadway Subway Project will be asking people on the street and in busy areas about why they’ve come to the area, how they travelled there, and other related information. This voluntary research will supplement our ongoing survey of local businesses to better understand business and public access needs and interests. This will help us and our partners at the City of Vancouver and TransLink learn more about how and why people come to Broadway to inform traffic and construction management and mitigation plans,” reads the bulletin.

“While a large project such as this will inevitably bring temporary impacts during construction, the Ministry of Transportation and Infrastructure and contractor will implement mitigation measures to provide ongoing access to business, visibility of signage and current information wherever possible throughout construction.”

Construction on the subway is slated to begin by the end of 2020, after a major contractor for the project is selected in the middle of the year. The extension should be ready for its riders in 2025.