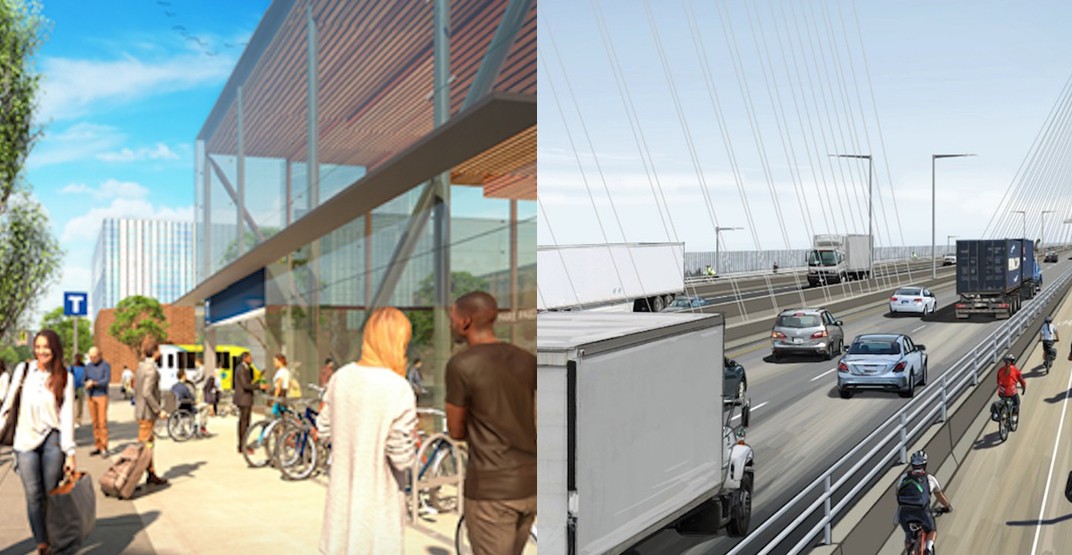 The private sector competitions to design and build two of Metro Vancouver’s largest upcoming transportation infrastructure projects is down by one competitor.

A spokesperson for SNC-Lavalin confirmed to Daily Hive today that the company will be withdrawing its separate bids to build the $2.8-billion SkyTrain Broadway Extension project and the $1.4-billion Pattullo Bridge replacement project.

Earlier in the year, the BC Ministry of Transportation shortlisted SNC-Lavalin for the detailed bidding request for proposal (RFP) stage for the projects, following a request for qualifications process.

The move is part of the embattled company’s reorganization, with interim president and CEO Ian Edwards announcing this week the company is moving away from its construction and oil projects to better focus on its engineering services, which has been deemed as a high-performing and growth area of the multinational Quebec-based corporation.

The company’s second-quarter financial report shows lower-than-anticipated results, amounting from the ongoing corruption charges for its work in Libya and the political controversy in the federal government. It expects to lose between $150 million and $175 million in the latest quarter.

“These charges and investigations, and potential results thereof, could harm the company’s reputation, result in suspension, prohibition or debarment of the company from participating in certain projects, reduce its revenues and net income and adversely affect its business,” reads the investor report.

SNC-Lavalin designed, built, and helped finance the Canada Line, and is operating and maintaining this standalone SkyTrain line through a 35-year contract — expiring 2040.

The company was also involved with the region’s other SkyTrain projects, dating back to the 1980s, and most recently the Millennium Line’s Evergreen Extension.

With SNC-Lavalin’s withdrawal, the race to build the SkyTrain extension project is now down to two teams.

The provincial government is slated to select a preferred consortium for the Broadway Extension by the middle of 2020.

Construction on the 5.7-km-long, six-station subway from VCC-Clark Station to Arbutus Street could begin in late 2020 for an opening in 2025.

Unlike the Canada Line, but just like the Evergreen Extension, an operating contract is not included in the RFP as the Broadway Extension is a continuous extension of the Millennium Line operated by TransLink subsidiary BC Rapid Transit Company.

However, the selected subway contractor will be required to provide $450 million in interim financing during the construction period.

For the new four-lane Pattullo Bridge project, the provincial government also chose three teams to advance to the RFP stage of the procurement process, with one team led by Kiewit Canada Development Corp. and another team jointly led by Flatiron, Dragados, Carlos Pattullo JV., and ACS Infrastructure Canada.

SNC-Lavalin’s bid for the Pattullo Bridge was in partnership with Acciona Infrastructure Canada.

Artistic rendering of Pattullo Bridge replacement (Government of BC)