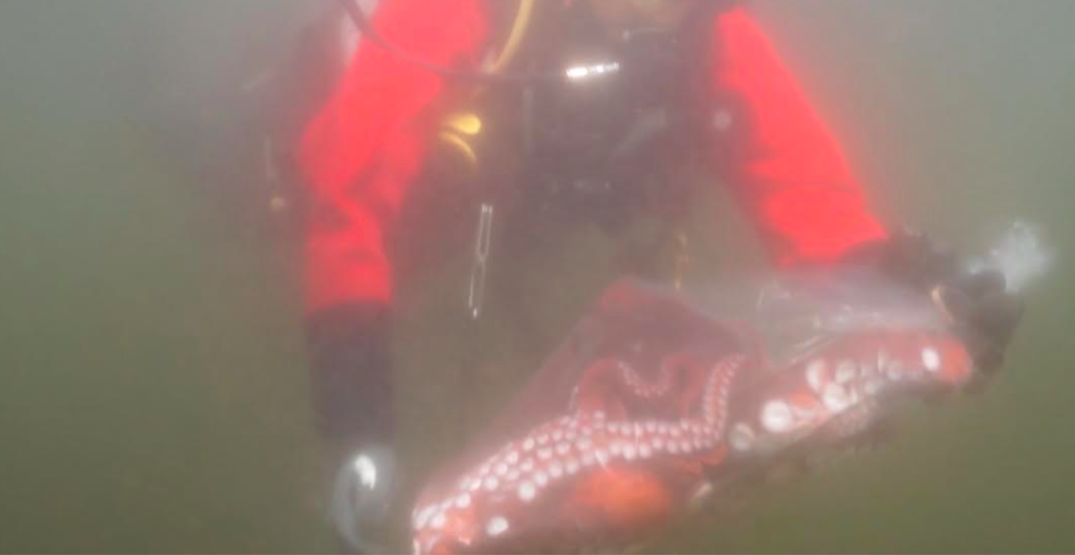 The octopus being released (Vancouver Aquarium)

A team from the Vancouver Aquarium recently transferred a female Giant Pacific octopus into the ocean, after noticing it had become “reproductively active.”

Ruby Banwait,  a senior aquarium biologist at the aquarium, said staff had observed the octopus spending more and more time outside her den, “which is a behaviour associated with looking for a mate.”

According to officials, female octopuses have an ovary-like tissue in their mantle, the large cavity that is attached to their arms, which produces an egg mass.

“We knew she was fully grown and seeing eggs in her mantle confirmed that it was her time to reproduce,” Banwait said.

Aquarium staff approached – and received permission from – the Department of Fisheries and Oceans to transfer the octopus to the ocean. The two organizations then created a plan to return the cephalopod to a den in nearby waters.

“We wanted to give the octopus the best chance and that included diving with her to the ocean floor, limiting her exposure to open water where octopuses are most vulnerable to predation, and finding a suitable habitat for her,” Banwait said. “We couldn’t be happier with the outcome from this mission.”

During her time at the aquarium, “this octopus fascinated countless visitors who caught an up-close glimpse of this incredible animal,” she added. “Now, with this next step, she is back in the ocean where she can find a mate, lay eggs, and contribute to our local Giant Pacific octopus population.”

Giant Pacific octopuses are believed to be one of the largest and longest-living octopus species in the world. Their habitat ranges throughout the Pacific Ocean from California to Alaska and extends west to the Aleutian Islands and Japan.

While relatively little is known about the Giant Pacific octopus population, it is not listed under the Species At Risk Act (SARA).

The octopus has been part of the Aquarium since February 2017.

She was released into the waters off the coast of Bowen Island late last week.