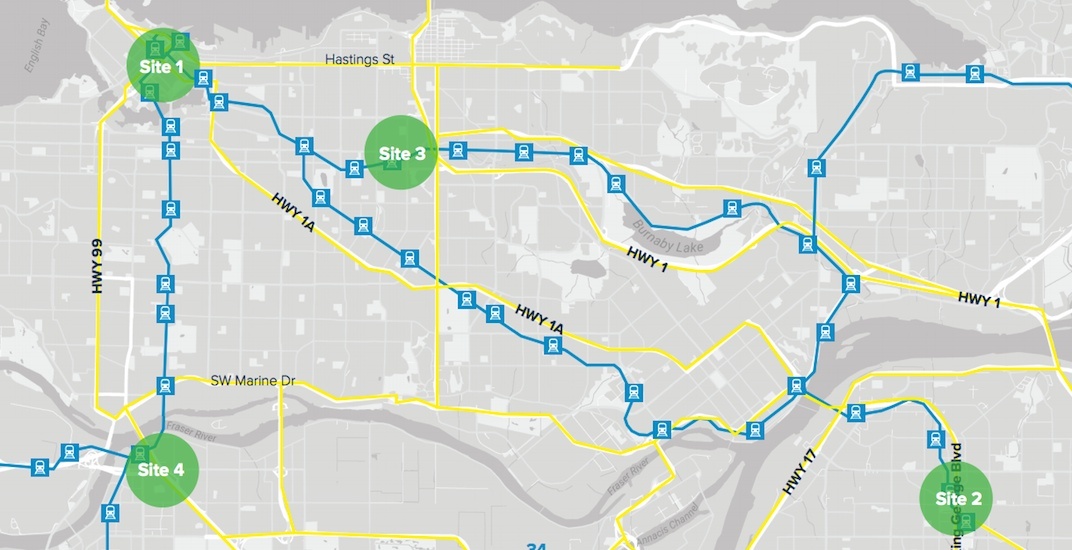 Nearly four months after bid plans for Amazon HQ2 were due, and about a month after Metro Vancouver’s dreams of becoming home to 50,000 Amazon employees were extinguished, the organization behind the development and submission of the bid has released its plans.

In its RFP released last September, Amazon said it was looking for an urban region with at least one million residents, a stable and business-friendly environment with the potential to attract and retain strong technical talent, a highly educated labour pool with a strong university system, and development sites for a new headquarters with up to eight million sq. ft. of office space – including its preference of ready-to-build greenfield and infill sites of about 100 acres – and strong transportation connections.

Four sites for HQ2 – all next to SkyTrain stations – were proposed in the bid, with two sites located within Vancouver, one in Surrey, and one in Richmond: 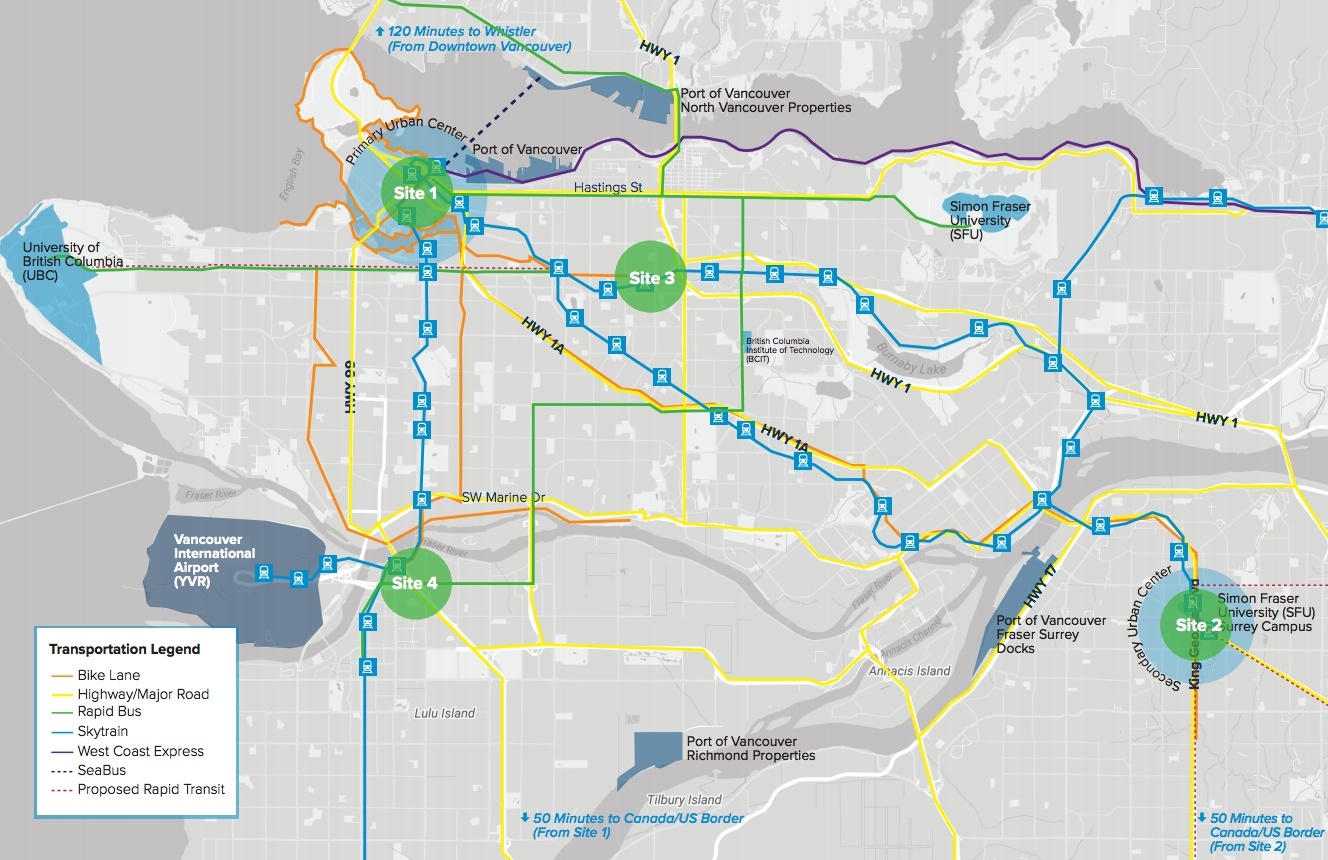 The downtown Vancouver option was listed as the preferred option and would enable the creation of 6.48-million-sq-ft HQ2 through the usage of existing and proposed office towers.

New-build office tower sites highlighted include the city-block-sized Larwill Park (future home of the Vancouver Art Gallery), the old Canada Post building, the site of Vancouver Creative Energy (on Beatty Street next to BC Place), and the railyards immediately east of Canada Place (previously the proposed site of the Whitecaps FC Stadium) as part of the planned Waterfront Station redevelopment.

This model would be similar to the company’s existing headquarters in downtown Seattle. 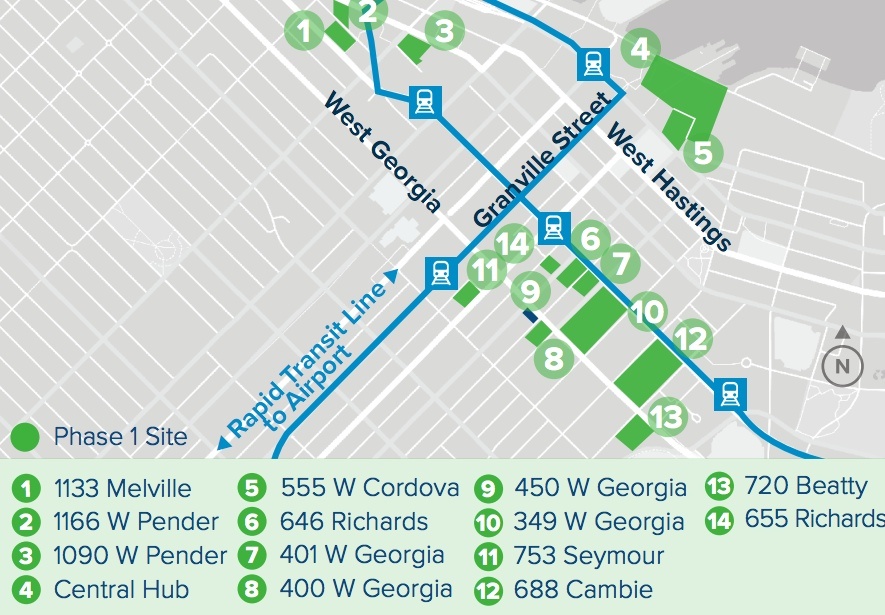 A secondary location in Surrey’s Whalley area would allow an option with “expansive space and tons of breathing room without giving up the amenities of the city.”

Multiple building sites along King George Boulevard between King George Station and Gateway Station are incorporated into this option.

The option would enable eight million sq. ft. of space over two phases of construction. 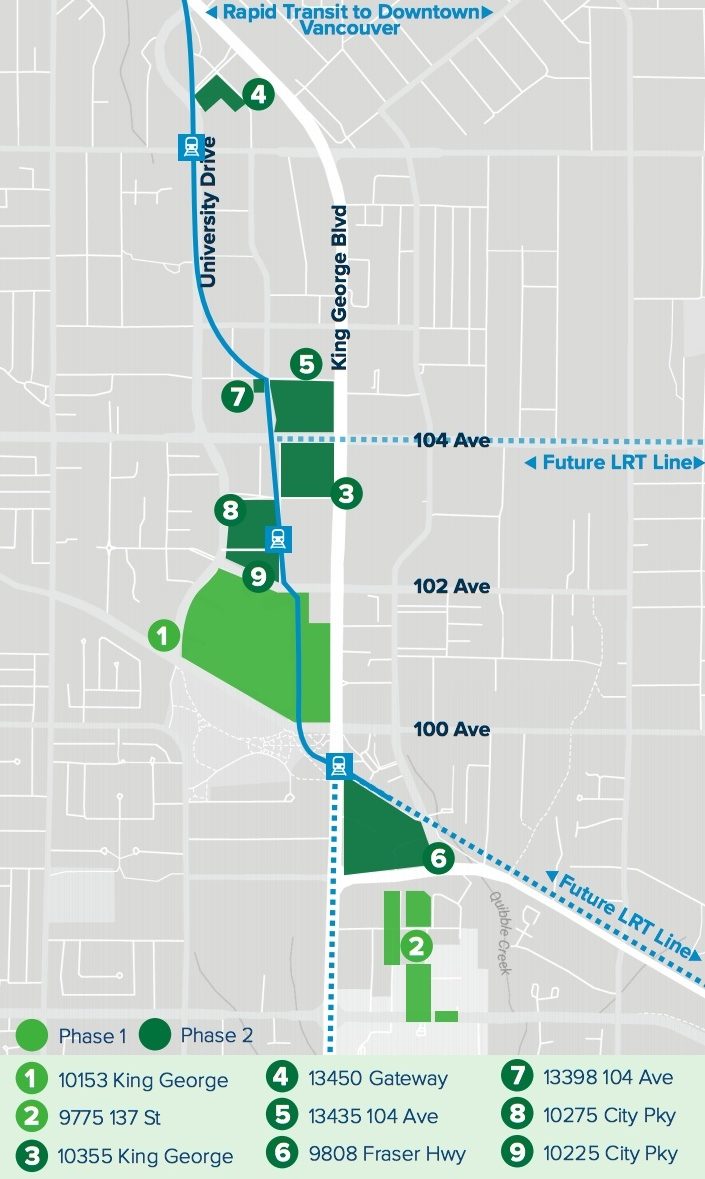 Large properties surrounding the Millennium Line’s Rupert Station currently used as warehouse space could be turned into a campus type of office headquarters. It is immediately east of the Broadway Tech Centre office campus, which has about one million sq. ft. of office space.

“This location provides the form and function of a downtown development, with opportunities for further growth and expansion. With its ease of accessibility and desirable location, companies opt for this area if seeking a neighborhood feel rich with culture.”

The sites could accommodate 7.9 million sq. ft. of office. 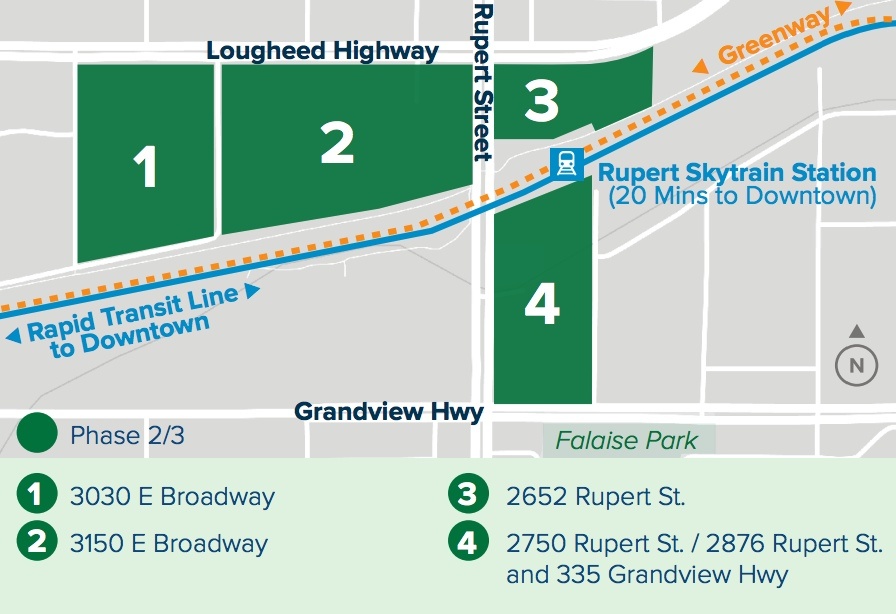 This predominantly industrial area around the Canada Line’s major interchange station incorporates most of the riverfront space framed by Sea Island Way, Highway 99, and the Fraser River, including the current home of the Richmond Night Market.

Advantages touted for this location include quick access to Vancouver International Airport and the recreational amenities offered at Richmond Olympic Oval.

Up to 7.5 million sq. ft. of office can be built at this location. 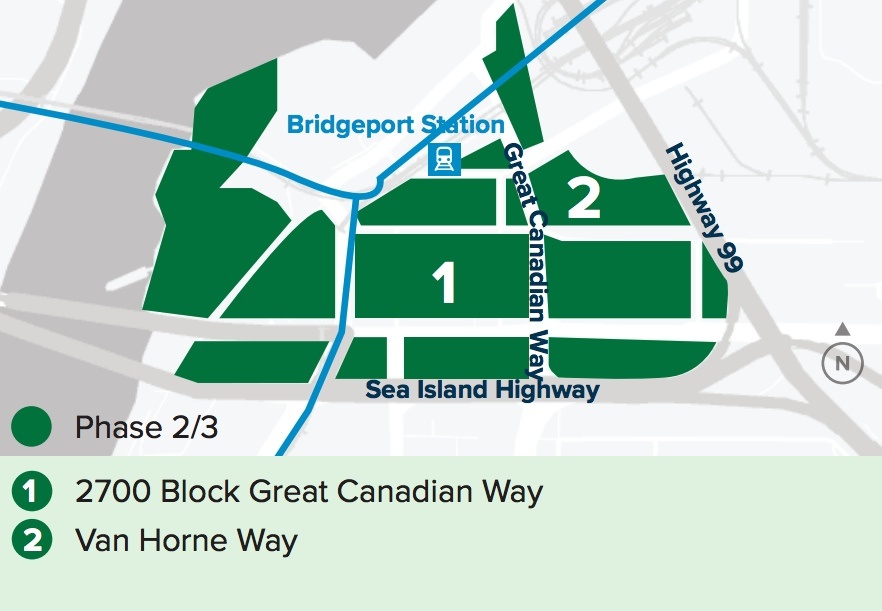 The VEC previously stated no cash, land, or additional tax incentives were offered in the bid plan as local proponents did not want to engage in a “race to the bottom.” Instead, it said it offered “a cohesive, comprehensive and compelling narrative that focuses on the built-in incentives of operating in and around the Vancouver region.”

However, within the bid book’s section highlighting “New Provincial Incentives,” details on seven of the 10 incentives have been completely or partially redacted from the public version of the bid book.

Some of the incentives proposed include further investments in post-secondary programming geared to support the tech industry and an “Amazon-Global Immigration Solution” by the provincial government to “provide permanent pathways for Amazon workers to live and work in BC.”

The provincial government’s Affordable Housing plans are also listed as an incentive as part of the bid book’s attempts to quell any concerns about tech talent being unable to afford Vancouver’s rising real estate prices.

Incentives from the federal government would only be discussed after Vancouver is shortlisted for consideration.

The bid boasts Vancouver’s long-term competitive cost advantage, which totals up to USD$34 billion in savings for office space, labour, and health costs over the first 10 years.

Tech salaries are 25% lower in Canada compared to the US, and lower than Toronto, Atlanta; Boston; Washington, DC; New York City; and Seattle.

Canadian employers also on average pay less payroll in health care costs and benefits in contrast to the US.

Vancouver’s low and stable total tax burden, especially for digital services, research and development, and corporate services, is amongst the highlights.

Proximity to Seattle could also be an advantage

Vancouver was often referred as the least likely major North American city to win HQ2 due to its close proximity to the Seattle headquarters and would place both headquarters within an earthquake zone, but the VEC says the location is actually a strategic advantage.

“Seattle and Vancouver are in the same time zone and located only 140 flight miles apart; that’s 2,300 flight miles closer than New York,” reads the bid book.

“Not only does proximity provide strategic advantages in terms of collaboration and information flow, but there are also financial and environmental benefits that come with operating 45 minutes apart – a clear benefit for any organization aiming for a triple bottom-line.”

Placing HQ2 in Vancouver would result in 90,000 hours less travel compared to flying to New York City and locate the headquarters within the “tech timezone” along the North American West Coast.

“Vancouver’s time zone allows same-day access to London, New York and Hong Kong, and our airport offers the shortest distances to Asia of any other North American airport,” the bid book continues.

“It’s also the closest west coast airport to Europe. Proximity streamlines collaboration and improves the flow of information and people between organizations down the west coast and internationally. ” 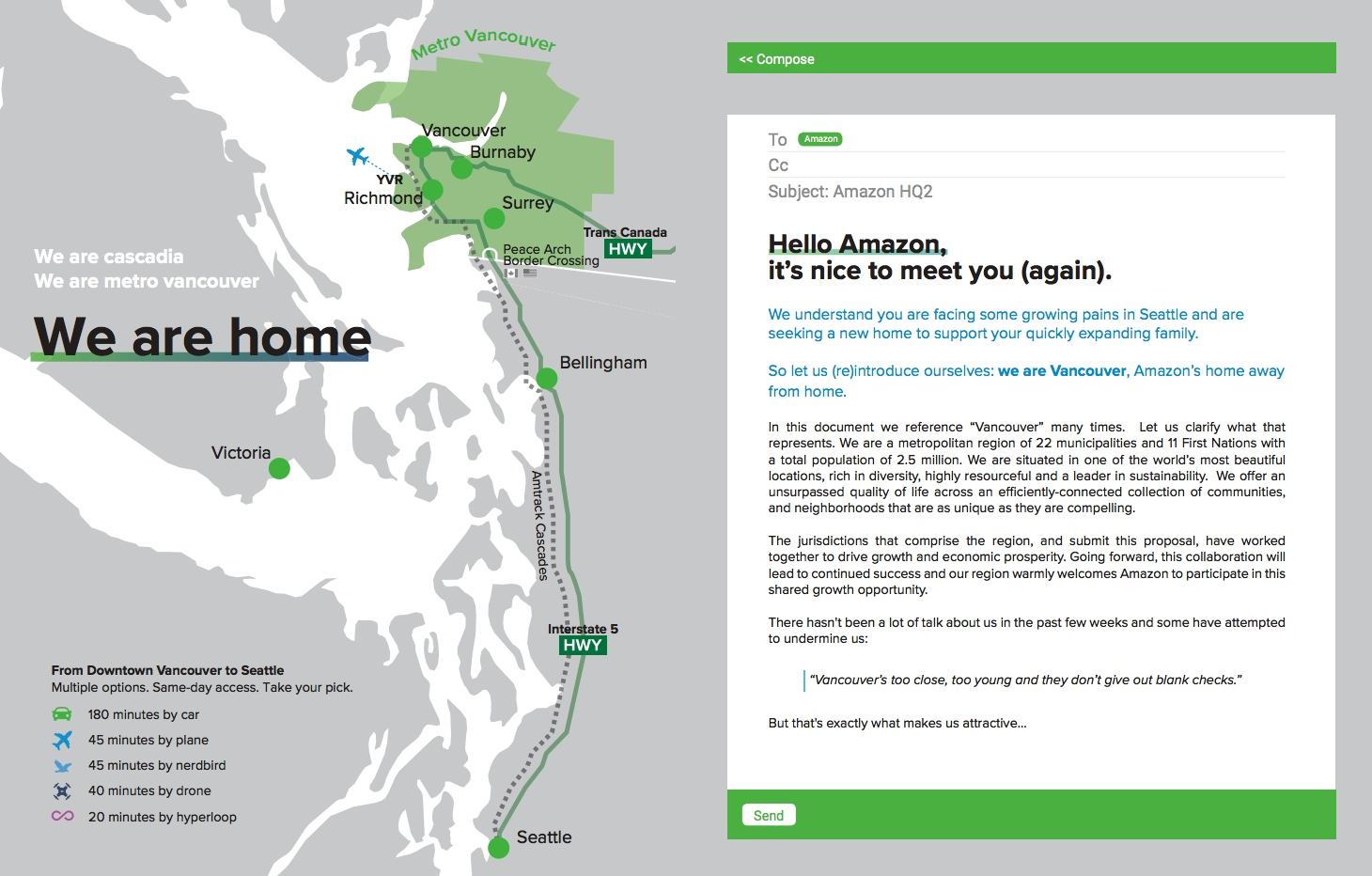 While the odds were against Vancouver and ultimately VEC was unsuccessful, this was not a futile exercise as it now provides VEC with further framework and experience on future bids for international businesses.

Of the 20 cities Amazon shortlisted for HQ2, out of 238 submissions from across Canada and the United States, only one Canadian city – Toronto – remains in the running.

However, Amazon still has plans to expand its presence in Vancouver. The tech giant already has 1,000 employees within the city, mainly within its space in TELUS Garden, and this will double in 2020 when the company opens its second office within a 150,000-sq-ft office building being built nearby at 402 Dunsmuir Street.

Until the building reaches completion, Amazon is occupying WeWork’s space at Bentall III on a temporary basis.

There is speculation that further expansion beyond 2020 could increase Amazon’s workforce in downtown Vancouver to 5,000.