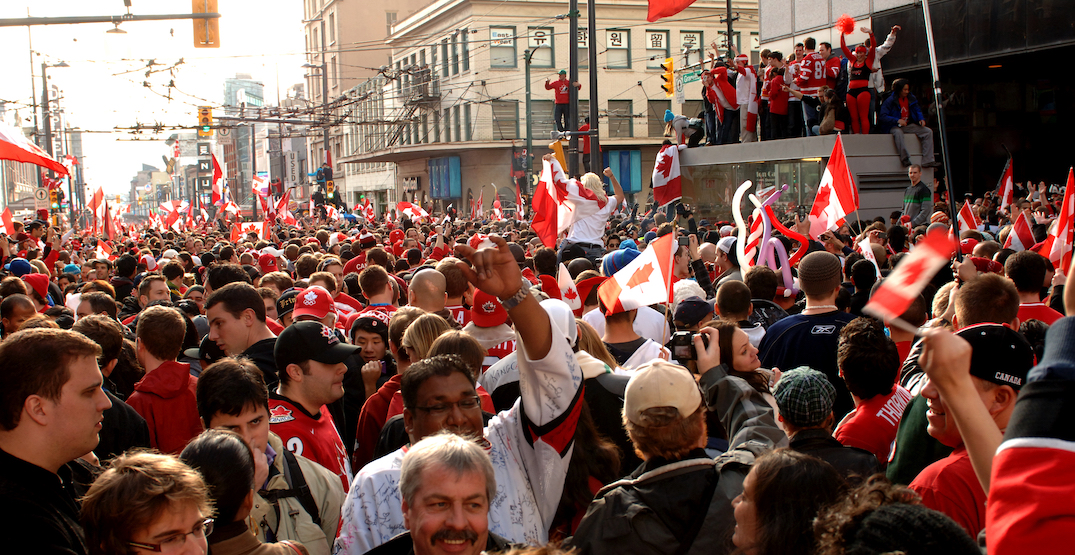 Crowds pour out into the streets of downtown Vancouver after the Men's Ice Hockey gold medal match of the 2010 Olympic Winter Games. (Shutterstock)

Should Vancouver try to host the 2030 Olympic Winter Games? Ten years later, are the legacies of the 2010 Games worth the effort and costs?

These are the questions Vancouverites and other Canadians have been pondering since late this week, when former VANOC CEO John Furlong announced his intention to help push for a Winter Games bid targeting 2030.

There are no bid plans yet as the idea is still in its infancy, but $100,000 has already been made available from the business community to help fund the creation of a bid committee.

Furlong suggests a repeat Olympics would carry relatively low costs by using the same sports venues and facilities built for the 2010 Games, which is a concept now encouraged by recent reforms to the International Olympic Committee’s policies. New Olympic-related projects could also help address some of the region’s most pressing housing and transportation issues.

Both the City of Vancouver and the provincial government have already indicated they will consider a 2030 bid when a proposal by a bid committee is formally submitted to them for review.

Here are some thoughts from the Twitterverse on the idea of Vancouver 2030:

John Furlong thinks we should bid for the 2030 Winter Games. Cheaper than 2010 because no need to build new venues, Canada Line, Sea to Sky upgrade etc. I like the idea. Do you?
Please answer and RT.

Not sure if this constitutes as a change of heart but thought about it more. #Vancouver2030 depends on federal gvt coming up big. If they are willing to massively fund needed legacy projects again (UBC & Langley skytrain extensions are two examples) them it kind of checks out.

By #Vancouver2030, it’ll be the Eternal Summer Olympics, and they’ll have added wheels to the skis and boards.

The 2010 #Olympics were one of the most amazing things I’ve ever been a part of (I lived in Whistler at the time), and gave us some amazing legacy infrastructure pieces. It would be a HUGE YES for me! #Vancouver2030

Many cities have passed on hosting Olympics (or FIFA World Cups) since 2010 — for good reason. Instead of multi-million $$ handouts to these orgs, cities can spend the same on people.

Plus, in Vancouver’s case, the free land just isn’t there anymore.

Please please please have #Vancouver2030 in the great city itself!! The whole country comes together when it’s in Canada and it’s a great experience for all

What the hell happens if it actually snows in #Vancouver during #Vancouver2030?!

I mean the city grinds to a halt with a sprinkling of snow and parts of transit just shut down.

I can see the headlines now… “Winter Olympics city shut down due to winter weather”.

So conflicted about the #Vancouver2030 after the #Calgary2026 fiasco. I am interested to see how it plays out, if engagement with public is handled better, but most of all, if they actually go forward with a bid or not.

Vancouver 2010 is actually something of an anomaly that the new facilities we built for the event are still in active use and are decent pieces in the community now (Olympic village, Richmond Oval, etc.) or were repurposed (Rogers Arena). #Vancouver2030 https://t.co/GQuySasKDS

Hearing that @MyVancouver could be considered for the #Vancouver2030 reminds of when I was fortunate enough to be part of the @Olympics opening ceremony #VanCity #TBThursday pic.twitter.com/PevvrSZooG

Just found out that #Vancouver2030 is a thing.
The 2010 Olympics here were cool and all, but at the same it was pretty hard on the people here. Everything looked great, but was also a gong show behind the scenes. Can we fix affordable housing instead? Thanks.

If #Vancouver2030 builds the affordable (& deeply affordable) housing Vancouver needs and expands transit, is it a good idea? However, I’d love for Toronto to host the Summer Olympics in 2032 but with LA hosting the 2028 Olympics, it probably isn’t likely. https://t.co/JthwkgPLSG

My Family Day tweet seems like a perfect contribution to discussions on #Vancouver2030. Bring it on. https://t.co/TYlq1if8u0

Why ? #2010vancouver was the greatest time I have ever had living in the lowermainland. 24/7 party and meeting new life long friends.

#Vancouver2030 hell yes. The memory of 2010 is a highlight of my life. I wish those unable to join in on the pure elation and pride felt then get the opportunity at some point.

Instead of spending millions on the Olympics. Lets spend that money on fixing the horrible and crippling housing crisis. #Vancouver2030

Lol @ anyone who believes Vancouver is going to have a ‘winter’ in 2030. Didn’t we have to manufacture snow a decade ago? #Vancouver2030

I loved the games in 2010 but I think hosting again is silly. Unless they have fixed the homeless problem or affordable housing the city should spend their money on other things
#Vancouver2030

Hearing a lot of murmurs of Vancouver hosting the 2030 Olympics. I’d say go for it. It’s a boom for the economy, and I think our city is already world-class as it is. If 2010 was a smash hit, let’s do it again! #Vancouver2030

Vancouver should absolutely go for #Vancouver2030. We have the infrastructure already in place, 2010 was a massive success, and the people want it back again.

Throwback to 2010 for the #Vancouver2010 games. I think it would be great to host them again 2030 #Vancouver2030 pic.twitter.com/exOyhGRzTv

i wanted Calgary to have the Olympics but that went downhill so damn fast when we had a vote. i wouldnt be surprise if #Vancouver2030 goes so damn fast downhill when they have the vote too.

i see a lot of jobs opportunities, buildings getting redone or built fresh, plus income

#Vancouver2030 It’s going to be a thing. Trust me on this. #Olympics

What’s the alternative? Shutting ourselves off from the world & trying to hide what makes this place great? Think what the development of a 5000+ unit athletes village could do for affordable housing if done the right way, with First Nations partnership. #vancouver2030 https://t.co/rcBihE5oYk