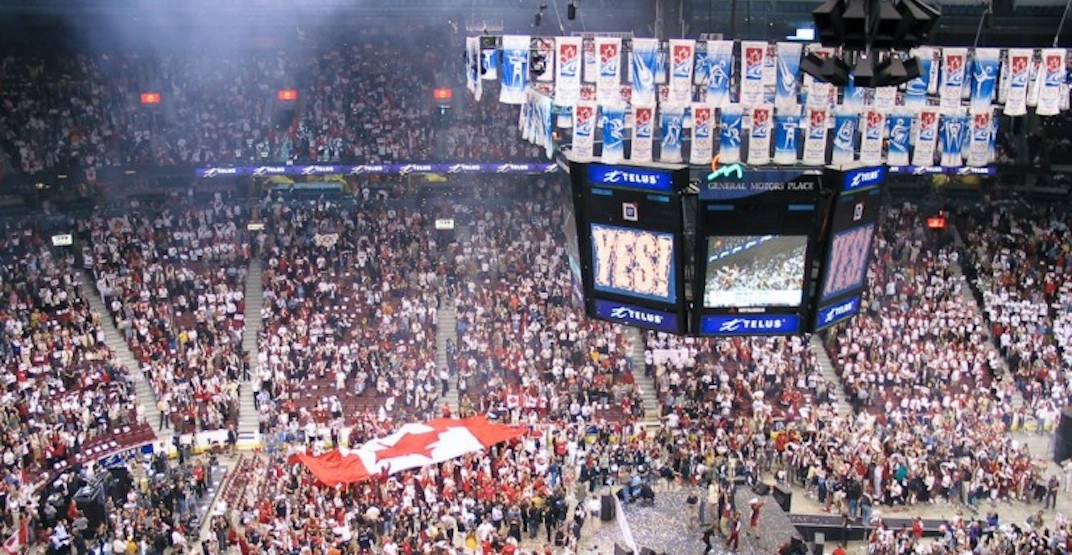 This little corner at the foot of Canada’s West Coast had back-to-back Canada Days in 2003.

A young teenager at the time, I still remember Wednesday, July 2, 2003 being a warm, sunny morning, that began with a rude greeting by a family of racoons who had rummaged through the garbage cans in my backyard and made a huge mess.

But there was no time to clean it up — my dad and I did not want to be late for a big possible moment in our city’s history.

This was the day the International Olympic Committee (IOC), during their session in Prague, would decide and announce the host city of the 2010 Olympic Winter Games.

Despite its early start time at 6 am, the stadium was filled to nearly capacity; this was the final leg of a much-fought journey for the bid’s supporters and well-wishers that began in the middle of the 1990s.

In 1998, Quebec City, Calgary, and Vancouver eagerly vied for the Canadian Olympic Committee’s approval to be Canada’s bid city for the 2010 Games. Vancouver came out on top over Quebec City in the second round of voting, after the first round eliminated Calgary from the running.

There was another do-or-die moment on February 22, 2003, when the City of Vancouver held a plebiscite over proceeding with the bid, which resulted in a solid 64% ‘Yes’ vote based on one of the city’s highest voter turnouts in history.

Street banner with the Vancouver 2010 bid logo in 2003. (Under Consideration)

At the doors into GM Place for Decision 2010, I recall being greeted by cheery bid volunteers — we were each given goodies upon entry: a boxed breakfast, some Olympic bid pins, a Canada flag, and a white towel (“towel power”) with the Vancouver 2010 Olympic bid logo printed onto it.

The stadium was also plastered with TELUS branding, as the locally-based telecommunications company was one of the founding corporate sponsors of the bid committee and funded the cost of hosting Decision 2010. (Ironically, a year later, VANOC chose Bell as its official telecommunications sponsor in a deal worth $200 million, far more than what TELUS was willing to offer).

By this time, all three cities vying for Olympic glory – Vancouver, Pyeongchang (South Korea), and Salzburg (Austria) – had already made their hour-long final presentations to the members of the IOC.

Vancouver’s presentation had the representation of some heavy hitters, including the likes of both Wayne Gretzky, Catriona Le May Doan, and then-Prime Minister Jean Chretien, whom both flew to Prague to state their passionate cases to the IOC. 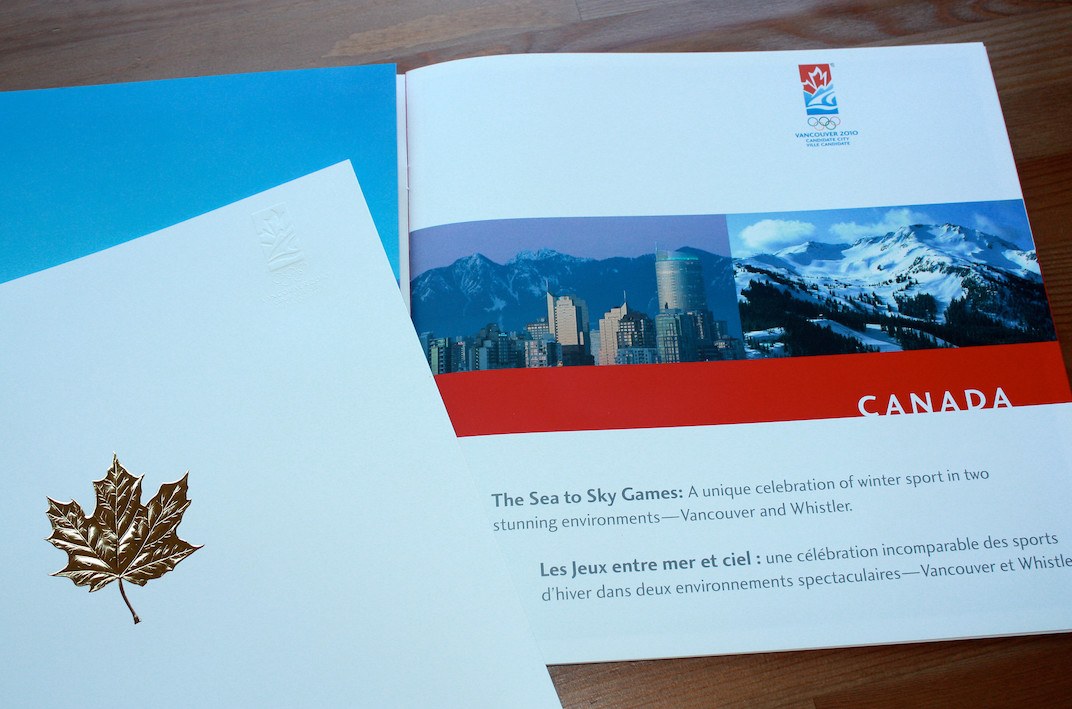 Back in Vancouver, the event inside the stadium also began with speeches made by local officials and once that was over, the centre ice jumbo screens switched over to the CBC’s live coverage of the IOC Session in Prague.

There were 15,000 people inside GM Place that early morning. For the second day in a row, hoards of Vancouverites were dressed in red and white clothing. Maple leafs and Canada flags were aplenty.

Some even went as far as painting their faces for this very early morning affair.

Many also brought to the event their homemade signs, carrying messages such as “Our Time To Shine”, “We’re Backing The Bid!” and “Waiting Since Calgary.”

We all wanted and believed in what this win would do for Vancouver. 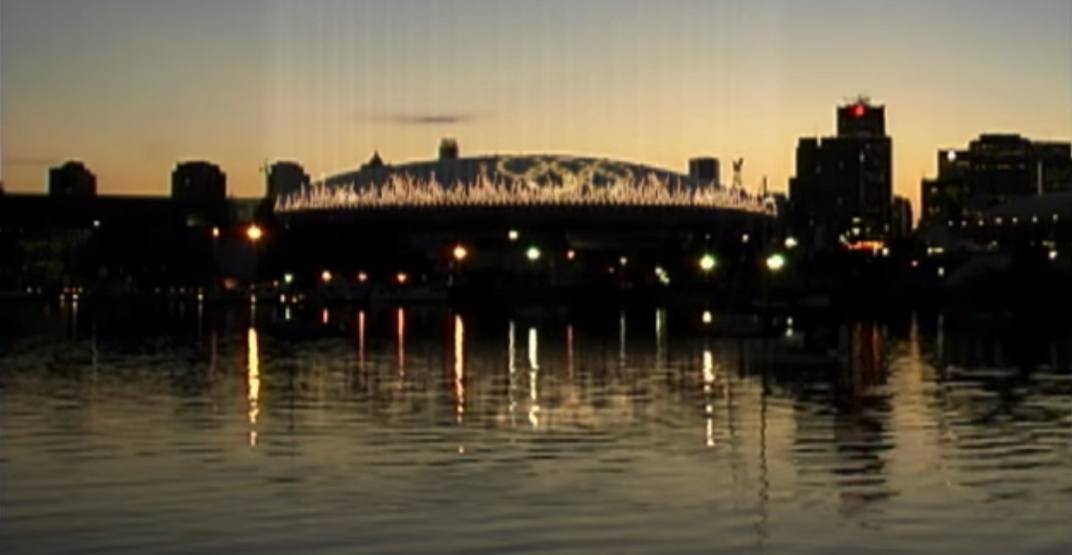 Artistic rendering of the roofline of BC Place Stadium turned into the Olympic cauldron. (Vancouver 2010 Bid Committee)

Our seats were located on the first row of the upper balcony, and at eye level were the jumbo screens. We nervously watched as then-IOC President Jacques Rogge announced that a city had been eliminated from the running as it had received the lowest number of votes.

Under the IOC’s rules for electing host cities, a winner is decided by receiving a majority (50%+) of the ~110 available delegate votes. The candidate city that receives the least number of votes is eliminated and another round of voting begins until there are just two bid cities going head on against each other or when a city has won a majority of the votes.

Fortunately for Vancouver, the city that was eliminated in Round One was Salzburg. That meant one more round of voting would happen immediately, and it would be between Vancouver and Pyeongchang.

While Vancouver was still in the race, the mood in the arena quickly transitioned from anxiety to fear when the Round One voting results were announced: Salzburg was eliminated after receiving only 16 votes, but Pyeongchang had trumped Vancouver’s 40 votes with its 51 votes.

We would find out about 30 long minutes later during the broadcast of the host city announcement. 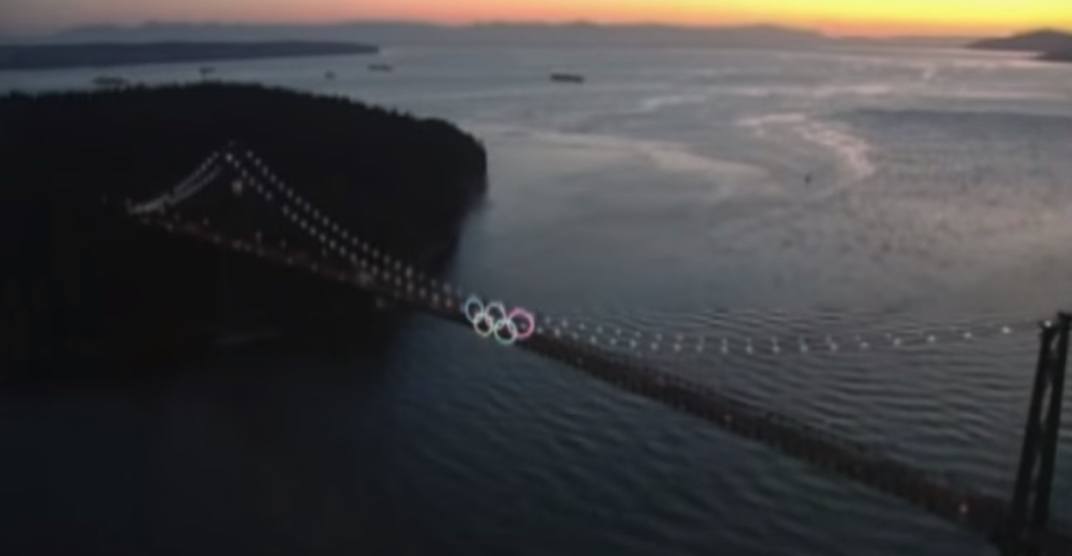 During the agonizing wait, programming inside the arena included the screening of two new bid videos, both set to Bryan Adams’ “Here I Am” ballad from the 2002 Dreamworks Animation movie Spirit: Stallion of the Cimarron, as part of Vancouver’s final presentation to the IOC earlier in the day.

A poignant introduction video — ‘Our Home’ — to Vancouver’s final presentation showed scenes of the city, landscape, culture, and people of Vancouver.

A second and longer video — ‘ Our Dream’ — depicted scenes of what Vancouver could look like during the 2010 Olympics.

Could you imagine Olympic rings on the sides of the Lions Gate Bridge and Burrard Street Bridge, or even a set of super large rings glowing at night on the waters of False Creek? (All three ideas were canned years later to cut down on costs at the height of the recession.)

Another big idea included in the video was an animation of using the roofline of BC Place Stadium as a ginormous Olympic cauldron. For obvious reasons, this was never actually implemented for the Games.

Just after 8 am, the announcement ceremony began and was televised on the jumbo screens.

As the nail-biting moment neared, the stadium turned eerily dead quiet: some heads began to shift downward over the fear of hearing an undesirable city name, while others tilted their heads up high to watch the words being shaped by Rogge’s mouth.

Then, at 8:41 am, Rogge approached the podium, opened a sealed envelope, and said the following:

“The International Olympic Committee has the honour of announcing that the 21st Olympic Winter Games in 2010 are awarded to the city of…(pause) Vancouver.”

The ensuing reaction inside GM Place was equal to what you would expect if the Vancouver Canucks had won a Stanley Cup Final home game in overtime — or how the crowds inside this very same stadium seven years later reacted when Sidney Crosby scored the overtime goal to win the men’s Olympic hockey gold for Canada.

Everyone jumped up from their seats and erupted with a deafening roar.

Fireworks went off inside the arena and we were doused with streamers and confetti. The jumbo screens above centre ice also began to blink with “YES!” text graphics.

Towel power was in force as well, as we all immediately began to madly wave and swing our towels around in the air.

A giant Canada flag, the size of several cars parked side by side, was unfurled and began to make its rounds across the stadium floor through with the help of the hands of an ecstatic and jubilant crowd. 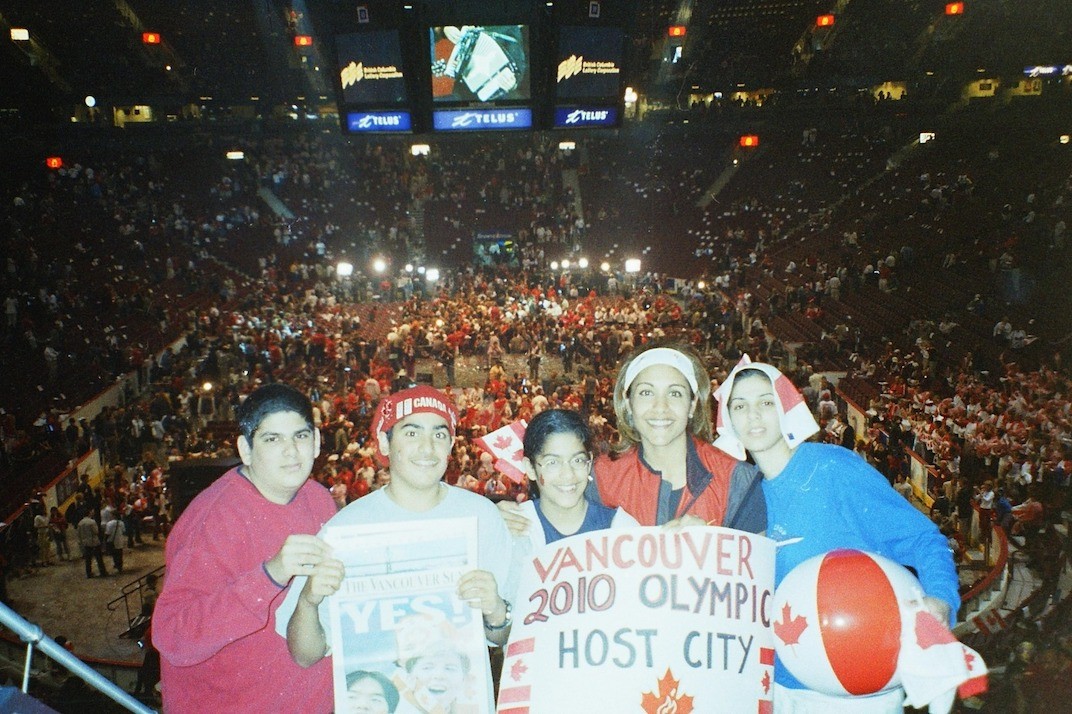 Then-young Daily Hive editor-in-chief Farhan Mohamed with his family at GM Place on the morning of July 2, 2003, moments after Vancouver was announced as the 2010 Olympic Winter Games host city. (Farhan Mohamed)

Outside the arena in the streets of downtown Vancouver, car horns went off everywhere as people ran and cheered through the streets in red and white with their Canadian flags just as they would again seven years later.

Over at Whistler Village, thousands more were celebrating after crowding into Village Square to watch the announcement on a big outdoor screen.

Later in the day, when we got home, we found out Vancouver had won the Olympic title against Pyeongchang by merely three votes: 56-53. It was a photo finish. (Pyeongchang went on to bid for the Winter Games two more times; it was unsuccessful against Sochi for 2014, but it of course ultimately landed 2018.)

In Vancouver, we were given another Canada Day celebration for the second consecutive day. It was a transformative day for the city, the rest is history.