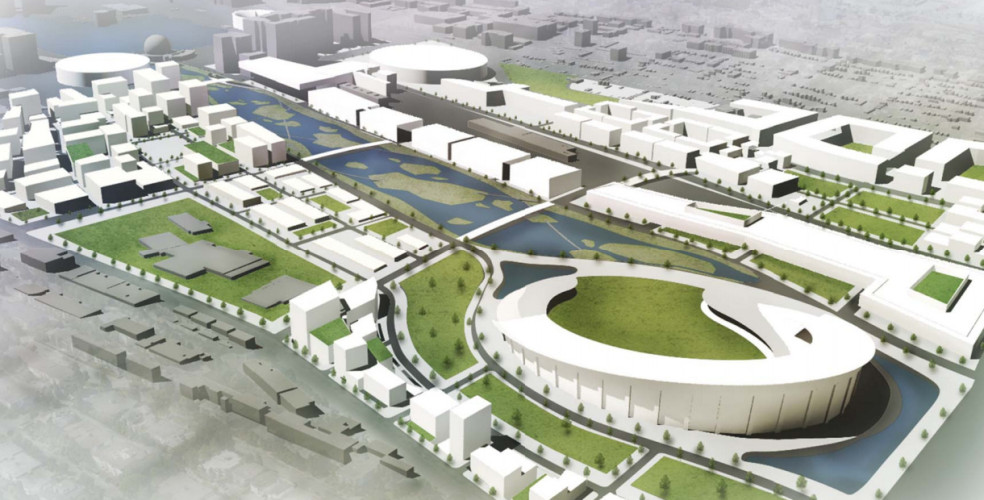 About three and a half years ago, I wrote an in-depth three-part series on what it would take for Vancouver to pursue the much more complex and grandeur endeavour of hosting the Summer Olympic Games.

The first part focused on general visitor accommodations, the Olympic Village, transportation infrastructure, media facilities, and the labour and economic power required to deliver the event while a second part delved into the possible locations of the many competition sporting events that were either new, temporary or existing facilities. The third part concluded the series with a look at the history of the Games and its trajectory.

Most of my Summer Olympics venue plan was centralized in the Metro Vancouver region, specifically in Vancouver, but a select number of venues were located elsewhere in Whistler, Victoria and even Calgary on the principle of creating a more economically feasible plan and sustainable post-Games legacy.

For instance, Calgary would host equestrian events at its existing world-class facility at Spruce Meadows and its CFL stadium would be used as one of the several required soccer venues. Victoria would be the location for a number of events as well to utilize its legacy from hosting the 1994 Commonwealth Games.

This plan was unfathomable at the time it was written given that the International Olympic Committee (IOC) strongly preferred highly centralized venue clusters.

However, with the 2014 adoption of ‘Olympic Agenda 2020’, this is now possible. The new policy enables multiple regional cities to share the responsibility of hosting the Games, as long as the logical plan and athlete and spectator experience do not suffer.

Consequentially, a recent farcical proposal by the Mayor of Quebec City to have Vancouver, Calgary, and Lake Placid host some of the venues of a ‘Quebec City Winter Olympics’ would almost certainly fail in every aspect of the technical evaluation.

With the Summer Olympics, there is always a core area – one big cluster – for some of the largest and most high-profile events and facilities. In most cities, this is called the ‘Olympic Park’.

In my Vancouver plan, an Olympic Park consisting of the Olympic Stadium (athletics, ceremonies), Aquatics Centre (swimming, diving), Olympic Village (accommodations for athletes), and broadcast and press facilities were located in the False Creek Flats – a 308-acre parcel of industrial and railway lands east of Science World.

Recently, a class of architectural design students at Kansas State University decided to take the idea many steps further. The 13 students began their fifth-year studio project last year, which included week-long visits to Vancouver to study its urban landscape. It culminated with the creation of a 123-page report focused on an Olympic Park master plan at the False Creek Flats.

Associate Professor of Architecture Nathan Howe had originally intended for the class to study Boston, but that idea was abandoned after the city cancelled its 2028 bid. A list of possible alternative cities was later narrowed down to Los Angeles, Seattle, San Francisco, and Vancouver.

“It was during this research that we came across a very in-depth article,” Shannon Hush, a student in the class, told Vancity Buzz. “Among all the good reasons of why Vancouver would be a good host city for the 2028 Summer Olympics, we picked that city because of the article that would give us a huge head start at our research.”

“Combine this with the opportunity to redevelop the False Creek Flats into a 2028 Olympic Park, Vancouver became the ideal candidate city,” said Justin Cain, another class member. “With the 2010 Winter Games in mind, we knew that Vancouver was a city that could not only host an Olympics, but responsibly go about hosting the international event.”

Two other new facilities are also planned on the periphery – a velodrome south of Science World at the 2010 Olympic Village and a temporary beach volleyball stadium at the City of Vancouver’s proposed Creekside Park extension at Northeast False Creek. 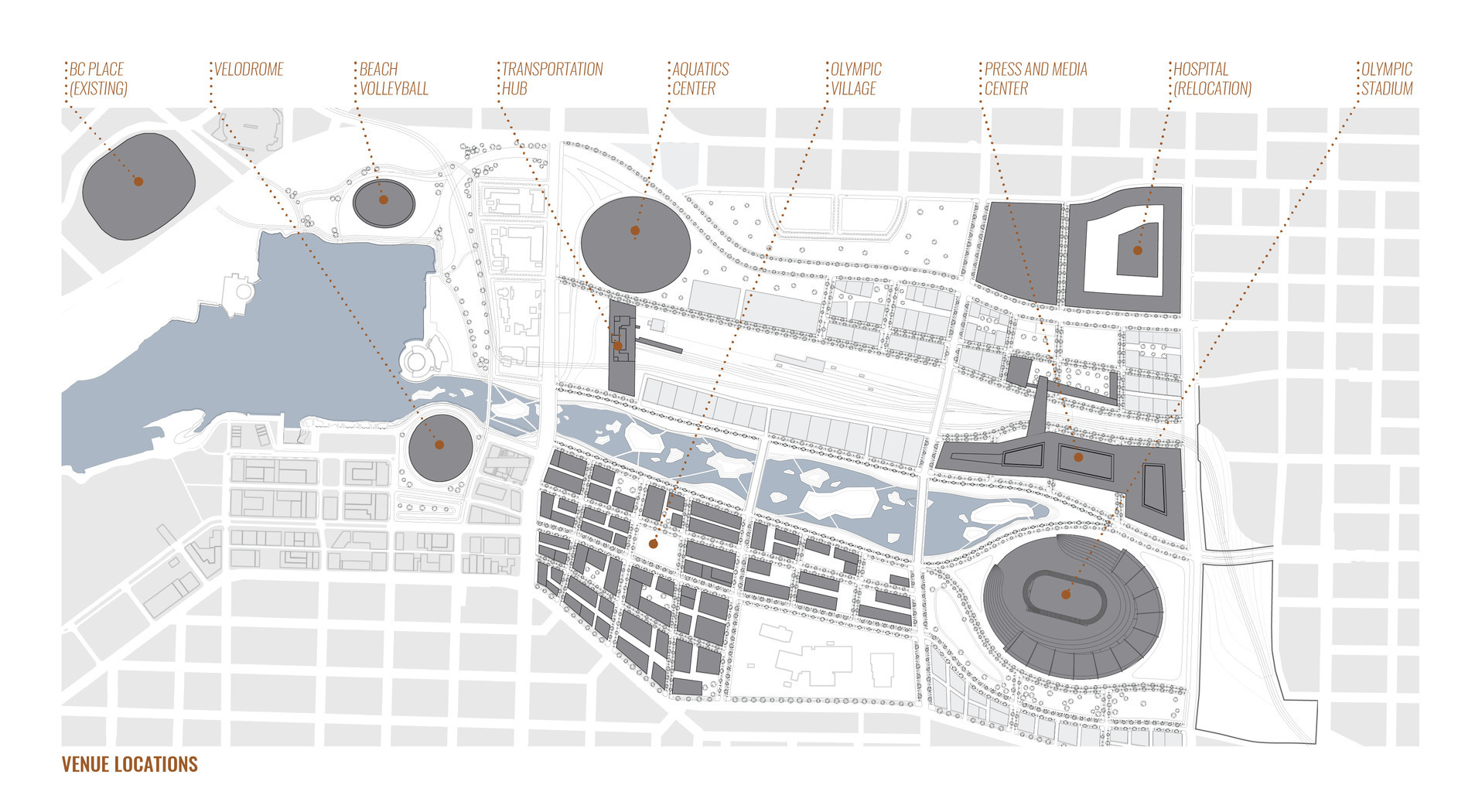 Water is reintroduced into the False Creek Flats, which was previously the tidal flats of the inner inlet until it was infilled in the 1910s to create a railyard to support efforts for the First World War and the city’s industrial businesses. A canal-like salt marsh, with a width of between 60 metres to 150 metres, stretching from the current eastern end of False Creek just south of Science World to Victoria Drive will be introduced, effectively reestablishing False Creek’s historic length.

Soil excavated from the marsh waterway construction process will be used to increase the minimum elevation of the False Creek Flats to protect the area from floods due to climate change. Currently, the infilled site is only about two to four metres above sea level.

“In order to combat the steady rise in sea levels, we proposed to cut and fill certain areas of the Flats,” said Lindsey Leardi. “This would be a huge technical challenge considering the amount of soil needed to increase the minimum elevation in the Flats. Moreover, the poor quality of existing soil will also require engineered soil for building foundations.” 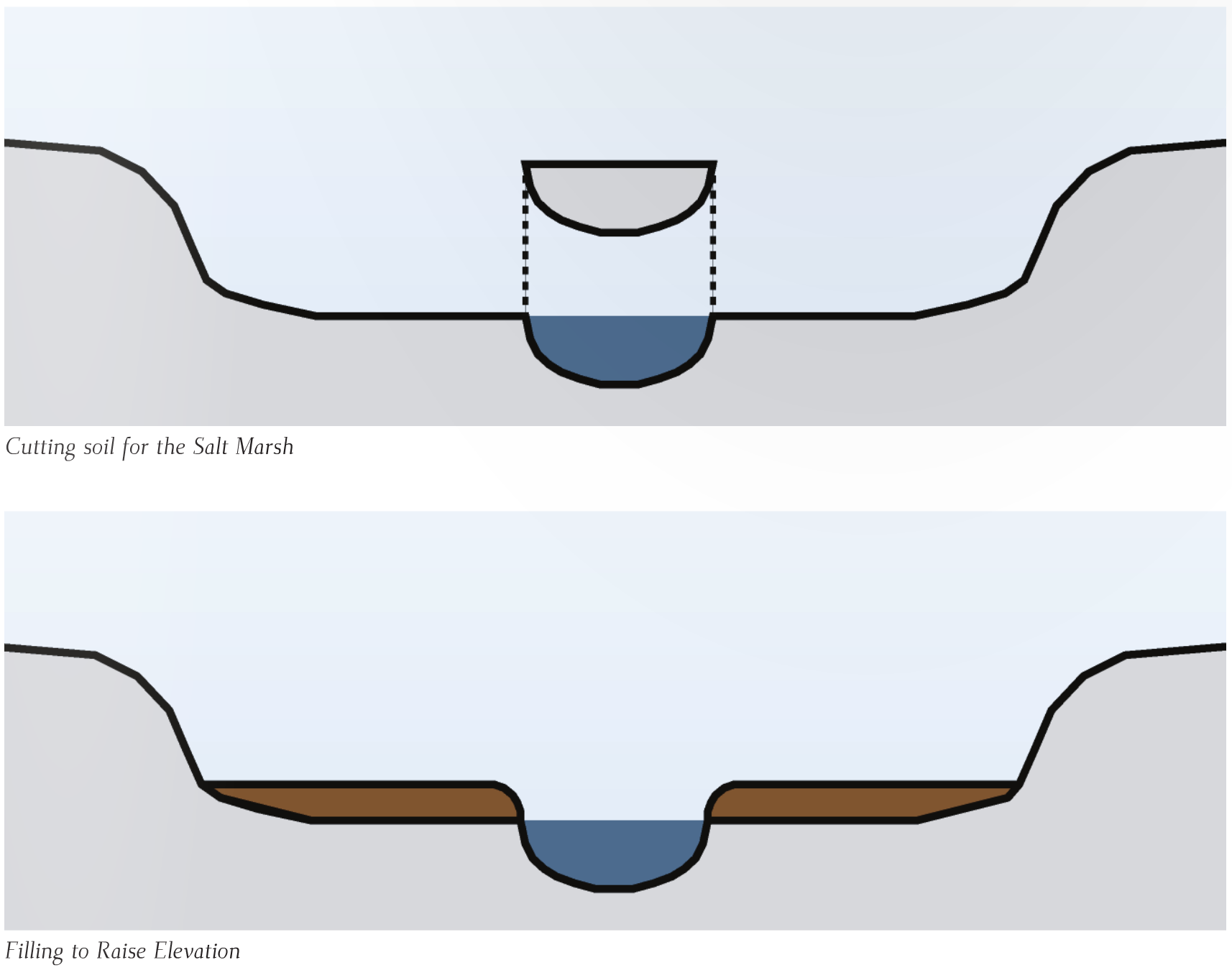 A series of manmade park islands in the marsh connected by a weaving network of pedestrian foot bridges are integral to the master plan. During the Games, souvenir shops and information booths will be located on the islands, as well as the exterior Olympic Cauldron. After the event, programmed spaces will be added to the islands to encourage foot traffic and liveliness; coffee shops and watercraft rentals will complement the new unique green space created.

The tidal marsh areas along the sloping edge of the water will be planted with a variety of vegetation that creates wildlife habitats and nourishing bacteria, filters out toxins, absorbs water, and prevents flooding. Rainwater from the area will funnel into a rainwater runoff network.

The form of development most of the buildings take on will mainly be a combination of low-rise and mid-rise buildings. A comprehensive network of pedestrian paths and bike lanes are proposed, and Terminal Avenue is rerouted into two one-way traffic routes on either side of the salt marsh.

Cross-section of a typical street in the Olympic Village, with future retail space on the ground level and residential units in the upper floors. 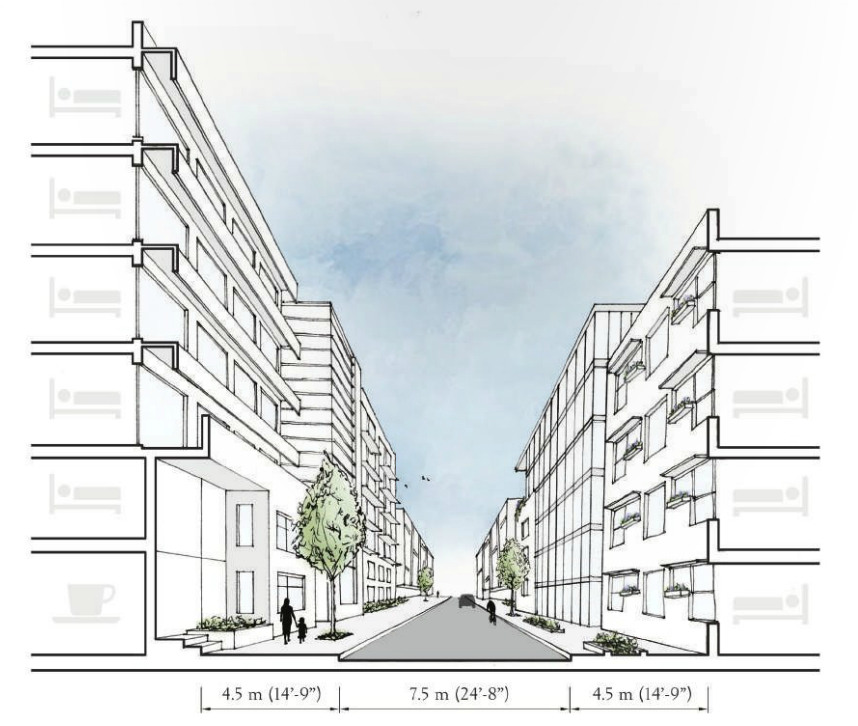 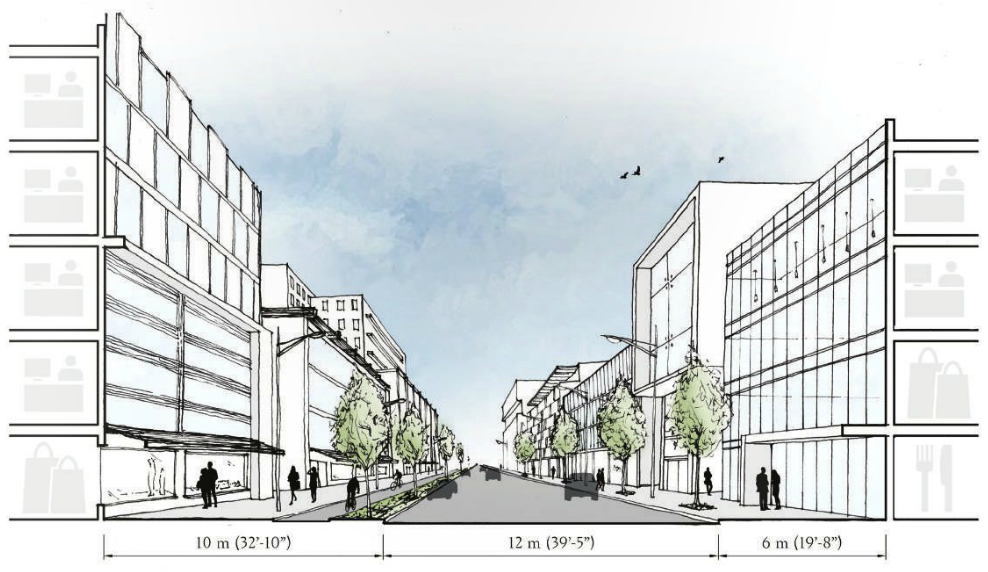 Rerouting of Terminal Avenue into dual one-direction routes on either side of the salt marsh.

Consideration was given to the existing placement of the Expo Line’s elevated guideway running through the False Creek Flats alongside Terminal Avenue. Under the Olympic Park master plan, the guideway running from Main Street to Victoria Drive would be rejigged to grade level next to the passenger rails that terminate at Pacific Central Station to reduce visual and acoustical disturbances.

As part of the realignment, the Expo Line gains a new station to serve the International Broadcast Centre, Main Press Centre, and new St. Paul’s Hospital, which has been relocated from the current proposed site at Station Street to a new site at the eastern end of the False Creek Flats.

The plan takes into account the existing VCC-Clark Station and extension of SkyTrain’s Millennium Line under Broadway, with one stop near the future Emily Carr University campus and the new Olympic Village.

As with most Olympic host cities, major investments in transportation infrastructure are necessary to handle the surge from Olympic-time traffic – to establish a sound logistics plan to ensure the city keeps moving during the Games. In many cases, long-envisioned projects that are needed regardless are accelerated, prioritized, and built in time for the event.

“While the transportation was fairly effective, I think there is a lot that could still be improved,” said Cain, describing his experience with Vancouver’s public transit system. “From an visitors standpoint, we would have had a tough time getting around without a car, especially in the rain.”

“A major part to an Olympic Master Plan in Vancouver would have to be an expansive transportation plan that would improve the connectivity of SkyTrain. There is still a lot of car traffic in the city which could be reduced with a smarter, more connective mass transportation system.”

There is no question that such a project to turn the False Creek Flats into the centrepiece of the Olympics would be an extraordinary complex and expensive project. Similar sites and clusters of facilities in Athens, Beijing, and to an extent even Sydney have become barren and unused white elephants, but that does not have to be the case if the post-Games usage of the design is prioritized.

This means venues are convertible for other uses and easily downsized through temporary structures and seating. Before construction happens, there is already a long-term post-Games usage business plan for each and every facility built.

“Key attributes to building a vibrant and successful Olympic Park for post-Games purposes are a strong master plan and vision. Creating that lasting legacy is key,” said Lindsey Leardi.

“As with any project, clear communication of the end goals for the city combined with strong leadership are vital in making sure the Olympics are successful. We created an identity for False Creek Flats through our master plan by engaging the existing urban fabric, connecting the Flats to the greater city, and densifying the area through the creation of meaningful spaces.”

Hush also echoed those thoughts on the importance of a post-Games legacy plan: “From the beginning, we were designing from a post-Olympic mindset. The Olympics only last a couple of weeks, but the impact we have on the site and the city has the potential to last forever. Thinking of the project as a revitalization of Vancouver was first; thinking of how the Olympics would then fit into this revitalization was second.”

From an outsider’s perspective, the students believe Vancouver is a suitable city to host the Summer Olympics, and the IOC’s increasing willingness to adopt reforms to make the Games more feasible and sustainable for smaller host cities only makes any potential Vancouver bid stronger.

“There is good public transportation, plenty of accommodations and many existing venues that can be utilized or renovated up to Olympic Standards,” continued Cain. “Our observations have led us to believe Vancouver is a world-class city that would be more than adequate to host a Summer Olympics. The Games could bring improvements to infrastructure, housing and areas like the False Creek Flats.”

“Only time will tell, but as the years go by, it will be interesting to see what direction the Olympics will head. I believe they will begin to downsize in terms of spectators. With so many ways to watch the Games without being there, I think there will be fewer spectators meaning a more modest Olympics. A city like Vancouver would certainly benefit from this should it become a reality. Overall, I think Vancouver would be an excellent candidate city that would not only put on a great Summer Games, but also be an opportunity to invest in the city and help propel it towards a sound and stable future.”

As for the likelihood that the False Creek Flats could be utilized in this manner, it would require major policy changes from both Metro Vancouver Regional District and the City of Vancouver.

Last year, the municipal government began a planning process to strengthen the area’s economic position in the city. And in 2011, Chris Doray Studio’s design of reintroducing water into the False Creek Flats won the People’s Choice Award in the City of Vancouver’s reCONNECT Vancouver competition. 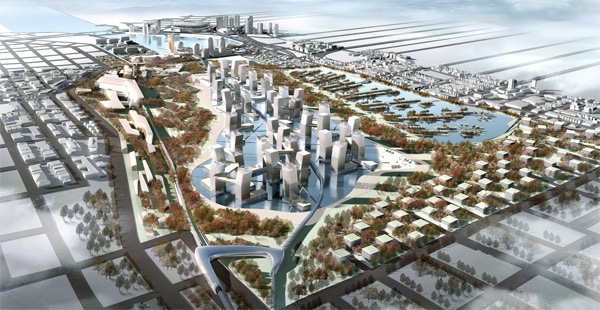 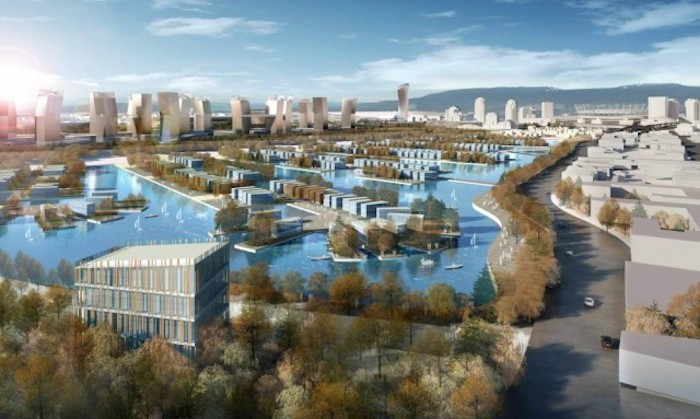 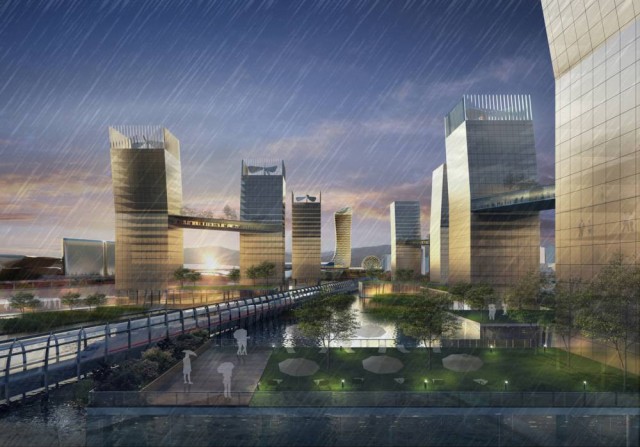