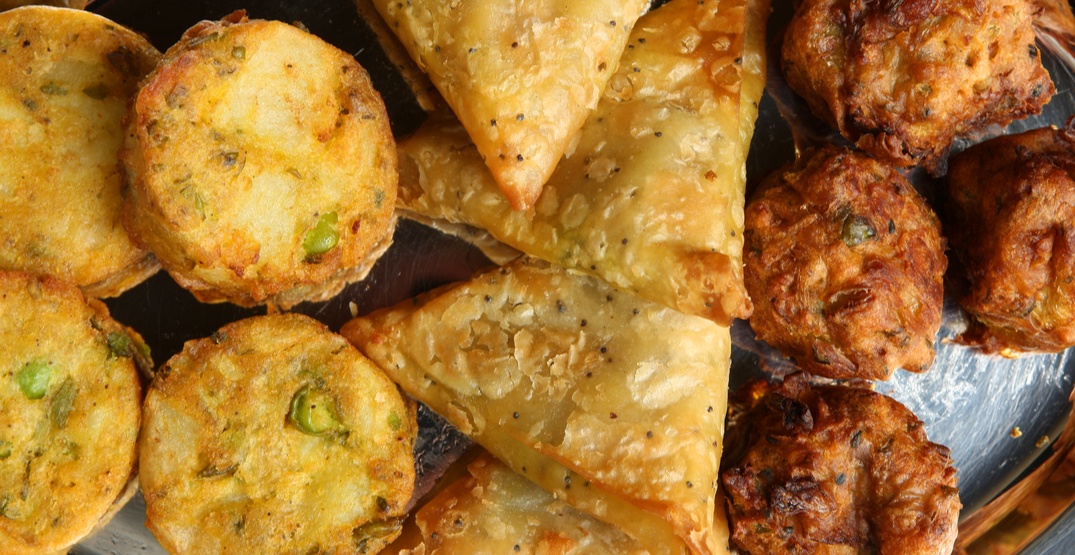 If you’ve ever attended a Vaisakhi parade you know that food is a big part of the festivities.

Every year, hundreds of families cook up delectable Indian cuisine and give away free food along the parade routes.

For these families, spending hours stuffing samosas and frying up pakoras is a labour of love.

The act is a form of sewa, a word meaning selfless service, and it is a fundamental principle of the Sikh religion.

Manveer Singh Sihota and his mom have cooked for the Surrey, BC, parade every year. Sihota says that for his mom there is an important message behind the food.

“She (says) this isn’t just food. It’s worship,” Sihota told Daily Hive, last year. “In daily life, we work for our food and we can be egotistical and think we did it all. But when we take a portion of our bounty and we share it with our human community it is a way of reminding us that there is something much bigger than us.”

For Sikhs in Canada and around the world, Vaisakhi is a time for celebration. The day commemorates the birth or establishment of Khalsa by Guru Gobind Singh Ji, the tenth Sikh Guru, in 1699.

In Canada, there are several major Vaisakhi parades taking place around the country

The Vancouver celebration will take place on April 13. The second parade in Surrey is planned for April 20. These are some of the largest Vaisakhi events outside of India, drawing in crowds of over 300,000 people.

In Toronto, Vaisakhi, also known as Khalsa Day, will be celebrated with a parade on April 28 this year.

In Sikhism, only vegetarian meals are served at temples and faith-based events such as Vaisakhi. From chaat to burfi, here are just some of the tasty treats to try at the event.

While the food is meant to be enjoyed by everyone, keep in mind the labour of love that has gone into its preparation.

These golden deep-fried triangle pastries are stuffed with a spicy filling made of potatoes and peas. They taste best when dipped in mint and tamarind chutney or ketchup.

Papri Chaat is a traditional Indian street food that has become a popular appetizer. The dish is composed of deep-fried dough chips known as papri. Layered on top is a mixture of onions, spiced potatoes, chickpeas, yogurt sauce, and chutney.

These crispy deep-fried fritters are made of a flour batter usually mixed with potatoes, onions, cauliflower, and spinach. Dunk them in chutney or ketchup and you have a winning combination.

If you want an authentic taste from India’s northern Punjab state — which is also home to the majority Sikhs in the country — this a must-try meal. Saag is a dish cooked greens such as spinach, fenugreek, and mustard leaves. It is served with makki di roti, a buttered flatbread made from corn flour.

This is another popular Punjabi dish, consisting of a deep fried leavened bread (bhature) and a chickpea curry stew (cholay).

Burfi can be best described as an Indian fudge. Made with condensed milk, and sugar, this colourful treat is often flavoured with cardamom, saffron, or pistachios.

These orange pretzel-shaped desserts will be a favourite with anyone with a sweet tooth. Jalebis are made with deep-fried batter and are soaked in sugary syrup.

Prashad is a sacred pudding usually served in Sikh temples. It is made with clarified butter, sugar, and flour.