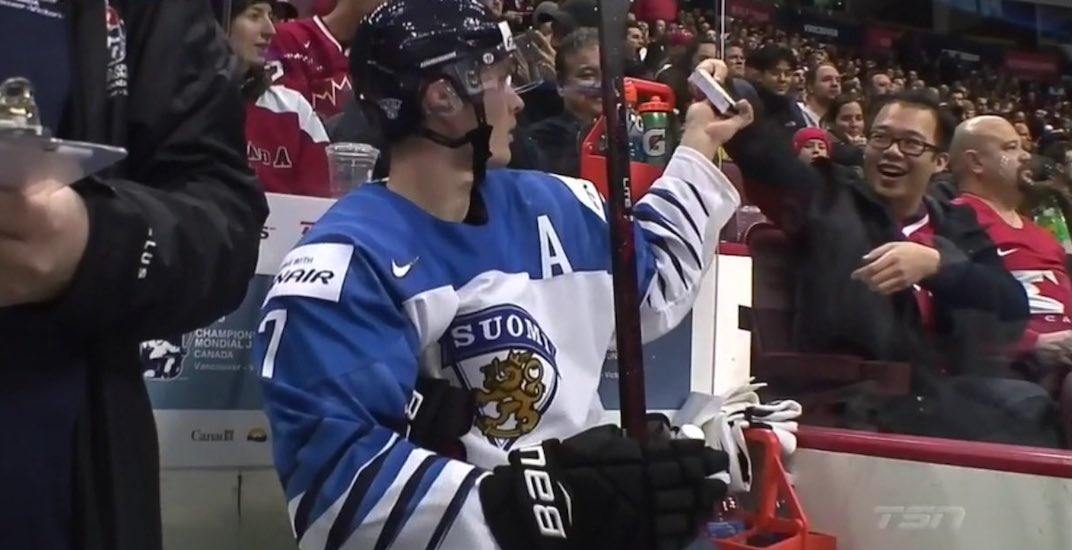 Most autograph seekers wait for players leaving the arena.

But not this fan.

This fan thinks outside the box…literally.

A man wearing a 2010 Team Canada jersey seated next to the penalty box handed Vaakanainen a pen and pad of paper, before trying to quickly snap a picture too.

TSN’s broadcast caught the exchange, much to the delight of commentators Gord Miller and Ray Ferraro.

While an NHL player probably would have ignored the request, the 19-year-old defenceman must have figured ‘why not.’ That autograph might be worth something some day, as Vaakanainen was a first round draft pick of the Boston Bruins in 2017.

British Columbia hockey fans have been enjoying pre-tournament games in different arenas all week, as the 10 competing countries prepare for the start of the World Juniors on Boxing Day.

“We did some positive things in the game and some not so positive, but it’s pre-competition games and this is a learning process for our team,” said Maxime Comtois, Canada’s only returning player from last year’s gold medal winning team.

“I think [through the pre-tournament] we played pretty good and we’ve shown glimpses of what we’re capable of,” said defenceman Evan Bouchard. “The focus now is playing a complete 60 minutes and being a little more urgent throughout the whole game.”

Any illusions that Canada would waltz to a gold medal in this tournament have surely been dashed after their three pre-tournament games. Canada looked underwhelming against Switzerland but won 5-3 before easily beating Slovakia 6-1. But Finland was the real test, and despite outshooting them 35-24, they failed it.

The good news is these are still just exhibition games, so there’s plenty of time for the team to come together and win gold. The tournament begins for real for Canada against Denmark on Wednesday.