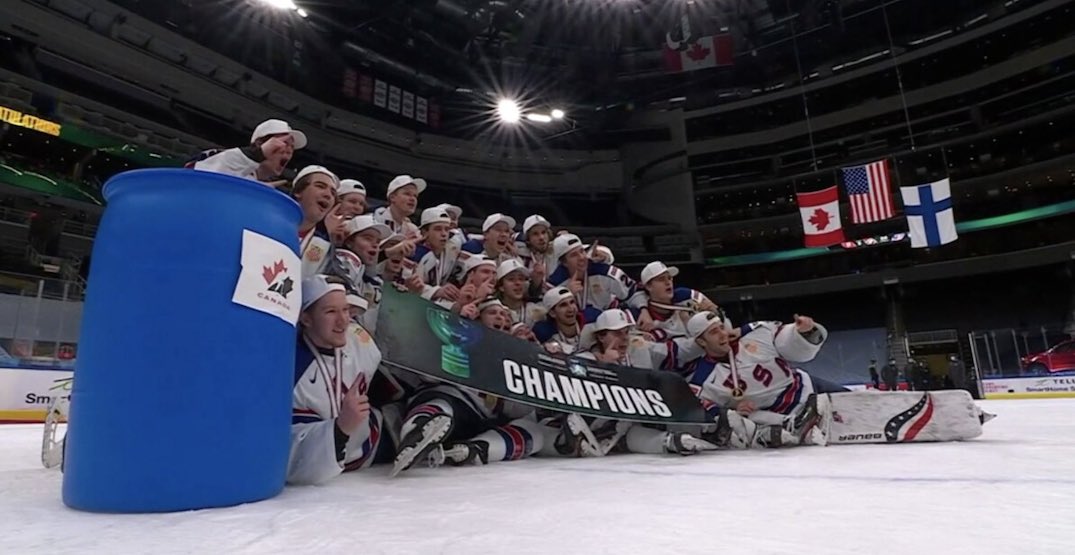 Having won gold on Canadian soil at the World Juniors in Edmonton, USA posed for the customary team photo.

Then they rolled in what looked like a garbage can.

With a Hockey Canada logo on it.

Video of the US bringing the can out for the team pic. pic.twitter.com/eV3mWxR9P1

It turns out, they had a pretty good explanation for it.

According to TSN’s Ryan Rishaug, the US had a “one barrel at a time” motto during the tournament and this was merely the last barrel.

USA head coach Nate Leaman confirmed this in his post-game media conference, according to ESPN’s Chris Peters. He said they meant no disrespect to Canada.

Speaking with US staff, the team had a motto – “one barrel at a time”. This was their last barrel and they’ve been putting team logos on them each game. That was the barrel for this game and the reason they brought it out. They say it wasn’t a trash can.

Nate Leaman in post-game: The barrel comes from a story that Ron Rolston brought to our team in 2007. It was about crossing the heart of the Sahara desert, and the only way people could figure to cross desert was to put barrels out. I shared the story with the guys.

We took a selfie with the barrel after every win. The players loved it. They got into the emotion of the celebration and they wanted to get the barrel on the ice. No disrespect to Canada, who played a great game. I'm sure every team had something they rallied around.

Not only that, but the Americans were extra classy after the game.

“On behalf of USA Hockey I just want to say thanks to everyone for helping run this tournament during this pandemic, for making it happen,” said USA forward Alex Turcotte. “We couldn’t have done it without all the help and support, so we appreciate everyone that made this happen.”