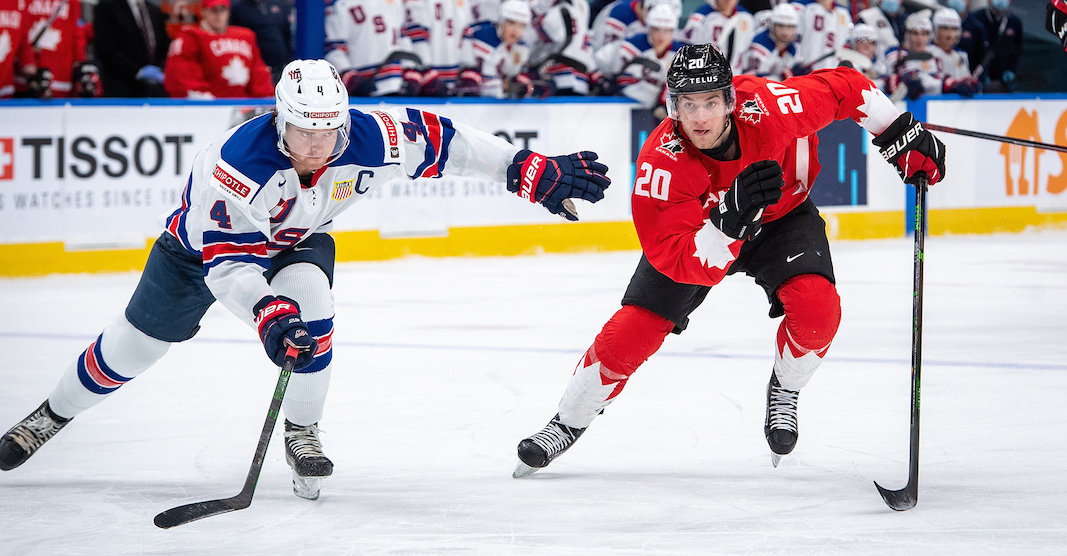 After a dominant run, Canada will have to settle for a silver medal at the 2021 World Junior Championship.

Canada lost to the USA 2-0 in Tuesday’s gold medal clash, their first defeat all tournament after outscoring their opponents 41-4 coming into the game.

You can feel the heartbreak for team Canada 💔 pic.twitter.com/BTCA0jr4jD

Canada had gone the entire tournament without trailing, but in the gold medal game they were placed in unfamiliar territory when the Americans scored first.

Turcotte tips it into the top corner #WorldJuniors pic.twitter.com/V4r2cSbiWA

Canada had been hemmed in their own zone for what seemed like eternity before Alex Turcotte finally converted by deflecting a puck past Devon Levi. It was the first five-on-five goal Canada had allowed in the tournament.

Canada had a nervous first period and were hoping to come out stronger in the second, but instead found themselves down 2-0 when Trevor Zegras took advantage of a strange bounce in the first minute of the period.

Canada began to find their legs after the Zegras goal, but were now facing adversity for the first time in this tournament, down a pair of goals against their toughest opponent yet.

Making things even tougher for Canada was the stellar play of Spencer Knight in goal for the USA.

A great read that leads to a great chance for Braden Schneider #NYR. Looks like Knight got his glove on it. pic.twitter.com/skaJWxss9x

Canada continued to press for chances in the third and had their share of quality scoring opportunities, but couldn’t get a puck past Knight to mount a comeback.

Though Canada was flat early in the game, credit has to be given to the Americans. They played an excellent game and stifled Canada’s offence, something no other team came close to doing in this tournament.

Levi’s journey to become Canada’s starter was a great story, and his incredible run ended with him deservedly being named goaltender of the tournament.

What a run for @DevonLevi33…

Dylan Cozens led Canada in scoring with 16 points in the tournament – the fifth highest total ever by a Canadian in a single tournament.

Canada won the first World Junior gold medal matchup between these two teams back in 1997, but the USA have now won the last four since then.

A silver medal is still a great accomplishment, but considering how dominant Canada had been all tournament long, it certainly feels underwhelming.