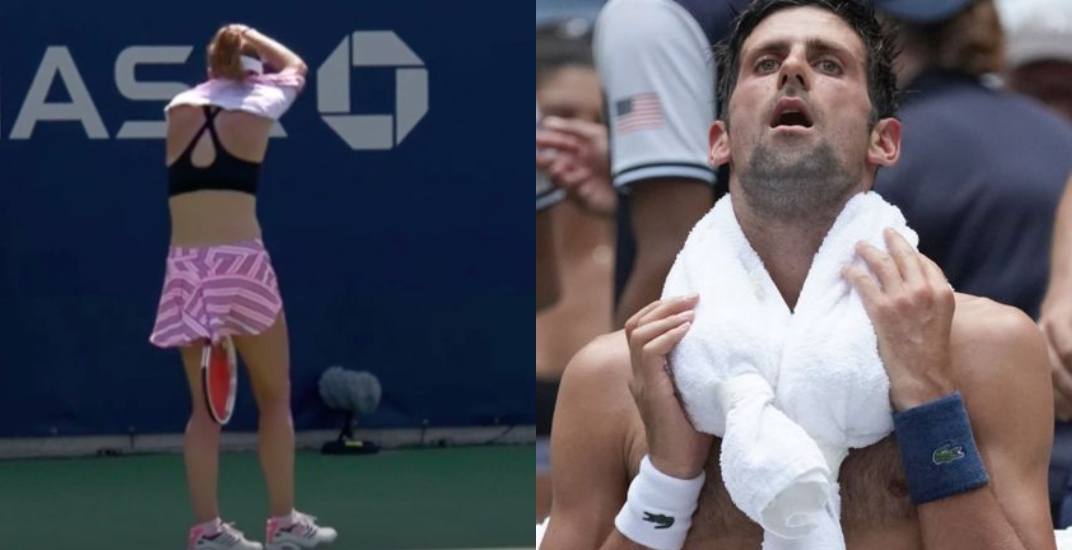 It’s ridiculously hot at the US Open this year.

With temperatures reaching 34°C in New York City on Tuesday, the tournament’s extreme heat policy was invoked, to give players a bit of a break.

For France’s Alizé Cornet, the 31st-ranked player on the WTA Tour, it meant getting a chance to change her clothes during a 10-minute break in the dressing room. Upon returning to the court, she realized that she had put her shirt on backwards.

Not wanting to further delay the match, she quickly took off her shirt and put it on properly.

For reasons Alizé Cornet put on her shirt wrong.
Then she changed it on court.
Christian Rask gave her a warning for unsportsmanlike conduct.

Despite the fact that she was wearing a sports bra underneath her shirt, the chair umpire issued her a code violation for the so-called infraction, to Cornet’s disbelief.

“A code violation for what?” Cornet asked, dumbfounded.

A first code violation is just a warning, so it didn’t end up costing Cornet on the scoreboard, though she did go on to be upset by 82nd-ranked Johanna Larsson of Sweden in three sets.

The rules appear to be different for the men.

Later in the day, Novak Djokovic sat shirtless for a prolonged period, without penalty.

Tennis fans noticed, criticizing the tournament for the sexist policy.

Extremely disappointed with umpire Christian Rask and the @usopen for this ridiculous rule disparity!! Alize Cornet was penalized for changing her shirt on court while the “heat rule” was in effect, yet many men players, including @DjokerNole removed theirs and did not! #USOpen pic.twitter.com/mjHAQdj4Xa

Alize Cornet came back to court after 10 minute heat break. Had her fresh shirt on back to front. Changed at back of court. Got a code violation. Unsportsmanlike conduct….. 😳
But the men can change shirts on court. https://t.co/sCN4KDXYTb

Alize Cornet given a code violation for briefly removing her top because it was on backwards (wearing a sports bra underneath, no less).

The US Open announced Wednesday morning that they are changing the policy, and will now allow players to change their shirts when sitting in the player chair.

“We regret that a code violation was assessed to Ms. Cornet yesterday,” the statement said. “We have clarified the policy to ensure this will not happen moving forward.”

“Female players, if they choose, may also change their shirts in a more private location close to the court, when available. They will not be assessed a bathroom break in this circumstance.”

The move comes less than a week after French Open officials announced that Serena Williams would not be allowed to wear her catsuit outfit again, which also drew criticism from fans.

The WTA issued a statement of their own, calling the original ruling on Cornet “unfair.”

“The code violation that USTA handed to Alizé Cornet during her first round match at the US Open was unfair and it was not based on a WTA rule, as the WTA has no rule against a change of attire on court,” said the WTA statement.

“The WTA has always been and always will be a pioneer for women and women’s sports. This code violation came under the Grand Slam rules and we are pleased to see the USTA has now changed this policy.

“Alizé did nothing wrong.”