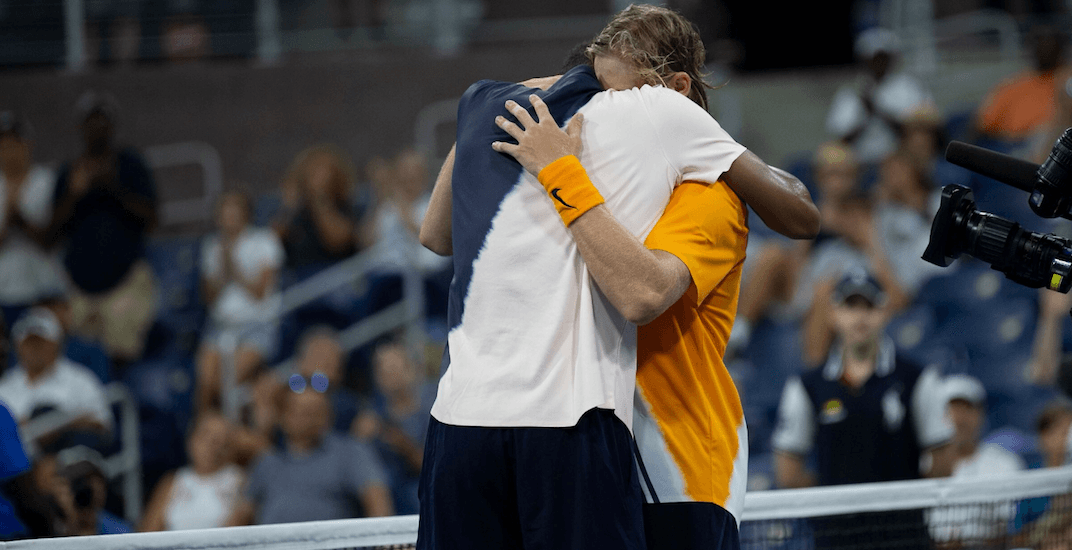 It wasn’t the match Canada was hoping for and the way it ended was worse.

Eighteen-year-old Felix Auger-Aliassime faced 19-year-old Denis Shapovalov in the first round of the US Open – the two are said to be not only the future of Canadian tennis but the future of tennis period.

But Auger-Aliassime, playing his first ever Grand Slam main draw match, was forced to retire.

Down 0-2 in the third set, the Montreal native called for a medical timeout and told the trainer his heart was racing. After attempting to tough out the situation for two more games despite hardly being able to run, the young Canadian looked to the stands at his sister and father and burst into tears.

Shapovalov consoles Auger-Aliassime who is forced to retire at 5-7, 7-5, 1-4 pic.twitter.com/8h1L1mXViG

And though he had just advanced to the second round, Shapovalov’s thoughts were clearly focused on his best friend’s wellbeing.

Shapovalov, in his on-court interview after the match, spoke about what he said to Auger-Aliassime during that embrace: “I told him at the net we’re going to be back here, we’re going to be playing in the finals. This is just one match,” said Shapovalov.

The health issue Auger-Aliassime felt on Monday has reared itself before. Two years ago, after he withdrew from a tournament in Guadeloupe, he was diagnosed with tachycardia – an elevated heart-rate.

Auger-Aliassime explained what he was feeling later in an interview with TSN.

“After the second set I started feeling some fast heart rates, some palpitations,” he said. “It’s something I’ve experienced before. We’re not quite sure the reason yet, but we’ll look into that. I was hoping it would go down so I could finish the match, but it was just impossible for me to keep going.”

The match itself – one tennis fans expect to see many times and on larger stages in coming years – was interesting and unpredictable despite neither player executing very well.

Right off the bat it was the younger Canadian, Auger-Aliassime, who would take control, breaking Shapovalov’s first two service games, and dictating play all over the court. Then, serving for the set at 5-3, the 18-year-old became nervous and missed some routine shots, allowing Shapovalov to break back.

Shapovalov won four games in a row and took the first set 7-5.

The second set was a similar but reversed version of that story.

After controlling the set, Shapovalov served for a two-set lead at 5-4. All of a sudden Auger-Aliassime found his game again. This time Felix won three games in a row to take the second set.

Back to that lack of execution – when the match was called, Shapovalov had nine double faults and Auger-Aliassime had eight. Between them, they’d already hit 93 unforced errors.

Where the score would’ve ended up and who would’ve moved on had Felix not had to pull out is anyone’s guess.

The one takeaway for many will be Auger-Aliassime’s raw power and tennis prowess from all parts of the court. His serves, forehands, and backhands – when he unleashes them and hits his spots, his opponent is either put on the defensive or he’s watching the ball whiz by.

Once this kid learns to play with consistency, there really is no telling how far he might go.

And of course, all Canadians will be praying the health issues are sorted out soon.